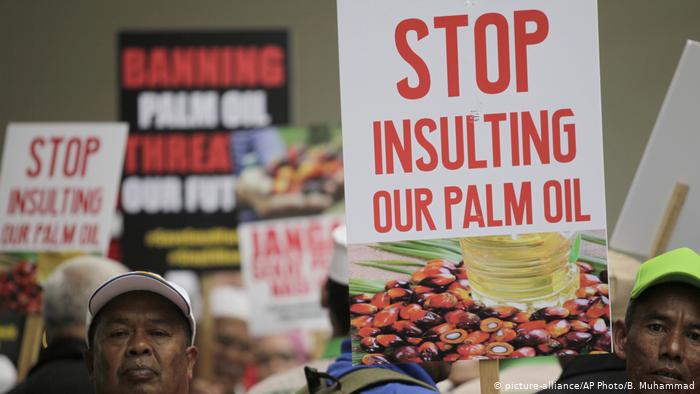 Malaysia and the European Union share a long history and strong trade ties. The European Union is Malaysia’s third-largest trading partner and is its largest source of foreign direct investment, and Malaysia is a major exporter of raw materials to the European Union. But politics over palm oil threaten their relationship.

Malaysia is the world’s second largest producer of palm oil after Indonesia, a crop that has long been linked to environmental and sustainability issues. Careful and considered engagement between Malaysia and the European Union is critical to ensuring a sustainable future for both the palm oil industry and the environment.

Palm oil is being held partially responsible for an uptick in tropical deforestation in Indonesia and Malaysia. Concerns also exist about the crop’s effect on tropical biodiversity. The conversion of carbon rich peatlands to oil palm plantations has a hand in accelerating climate change and increasing the risk of peat fires that produce toxic haze pollution. But scattered consumer boycotts across the European Union in response to the crop’s environmental impacts led to a European Parliament vote to ban the use of palm oil for biofuels in the European Union by 2030. This quickly developed into a political flashpoint.

Malaysia and other producers immediately retaliated, claiming that singling out palm oil was unfair. Indeed, it is the world’s most efficient vegetable oil by land area. But Malaysian diplomats eventually gained a small victory. The European Union’s recast of the Renewable Energy Directive (RED II) avoided singling out any vegetable oil and instead limited the amount of ‘high indirect land use change (ILUC)-risk biofuels’ that member states can count towards their national targets for renewable energy.

While not all palm oil will automatically be considered high ILUC-risk, it is difficult for Malaysian palm oil to qualify under the low-ILUC risk category. Malaysia still claims that RED II ‘lack[s] transparency [and] scientific credibility [while] many of the assumptions therein fail to reflect the actual sustainable practices in the industry’.

A trade war over the dispute has been on the horizon.

The European Union is a significant market for Malaysian palm oil — the second largest importer of the oil only after India. But for Malaysia it is also a matter of national pride and domestic political survival. Not only does palm oil contribute around 5 per cent of Malaysia’s annual GDP, it’s a crop of national significance.

It is credited with fuelling development and spurring poverty alleviation in rural areas. In recognition, the oil palm has pride of place on Malaysia’s 50 ringgit banknote, beside an image of the country’s first prime minister. Over 40 per cent of the sector is also run by rural smallholders, and winning the support of this ‘kingmaker’ voting base will be imperative for any political party in power.

Malaysia’s outgoing Minister of Primary Industries Teresa Kok warned that the government may start penalising EU products in retaliation. This may include banning products marked ‘palm oil-free’ and buying fighter jets from China instead of the European Union. Malaysia also announced plans to bring a complaint against ‘protectionist measures’ at the World Trade Organization’s (WTO) Dispute Settlement Body.

The spat is also extending to the regional level. Malaysia teamed up with Indonesia — its major competitor — to create the Council of Palm Oil Producing Countries (CPOPC) to coordinate efforts against the European Union, including the possibility of a joint WTO complaint. It also flagged palm oil as a deal breaker for the long negotiated regional ASEAN–EU Strategic Partnership.

The European Union views the issue as not serious enough to wholly damage EU–Malaysia relations. But this sentiment is not shared by Malaysia. Malaysia announced its intentions to continue to suspend negotiations for the Malaysia–EU Free Trade Agreement (FTA) until the matter is resolved. But this would sacrifice EU relations for a commodity that only contributes 4.4 per cent of total EU–Malaysia trade — and only 1.4 per cent of that is used for biodiesels that fall under RED II limits.

Malaysia risks being left behind in ASEAN–EU relations, with Singapore and Vietnam already concluding their own FTAs with the bloc while Thailand and the Philippines move forward with negotiations.

To brace for impact, Malaysia is actively reshaping its strategies. The formerly lacklustre National Biofuel Policy has been speedily beefed up to increase local consumption, with the implementation of B20 and B30 minimum biodiesel fuel component requirements by 2020 and 2025 respectively. In 2018, stricter regulations on land use change limits for palm oil were also announced.

While the European Union insists that the RED II is not a boycott against palm oil, Malaysia certainly sees it that way. Activists argue that sector-wide boycotts are not an effective means to address sustainability issues, concerned that boycotts could drive up demand for other, more land-intensive, vegetable oils. This could encourage even more intense deforestation elsewhere. Similarly, the European Union’s RED II policy proposal does not acknowledge industry efforts to move towards more sustainable practices.

Malaysia’s combative and defensive responses also limit the space for constructive discussion and progress. Both parties should take a step back and reassess their terms of engagement for a more sustainable future for both the palm oil industry and the global environment.