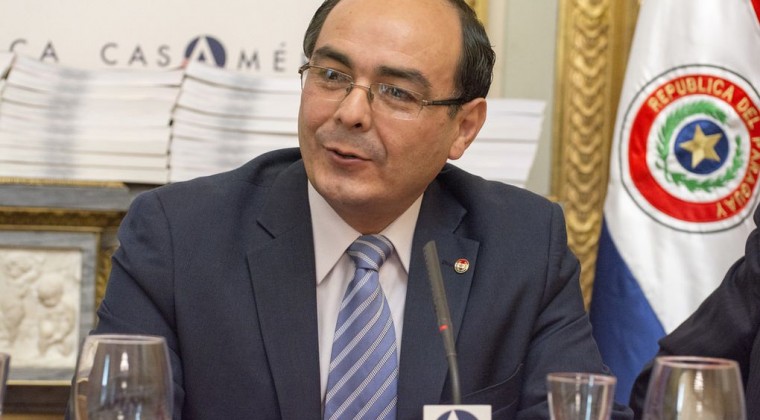 Though Paraguay and Turkey have had permanent diplomatic relations since 1953, the ties have gained new momentum since Nov. 20, 2018, when the Turkish Embassy in Asuncion opened and marked a new stage of cooperation.

The mission’s opening was accompanied by a historic visit from President Recep Tayyip Erdoğan to Paraguay.

In an interview with Anadolu Agency (AA), Paraguayan Foreign Minister Antonio Rivas Palacios recalled that "on this visit, we laid the foundations for greater commercial exchange and investment establishment with a Eurasian country of almost 80 million inhabitants, which according to their GDP per capita will be the world’s 13th largest economy."

"The spotlight is on the opening of the Turkish Embassy, which establishes a closer link in the framework of the bilateral relationship, that is also transformed into an approach at the highest level," said Palacios, adding that Erdoğan’s visit enriched the mutual knowledge not only at the governmental level but also on the social level.

According to the foreign minister, the opening of the operation generated a commercial economic approach where there is a channel that allows the investor to know about events and opportunities in Paraguay and recognizes the central location of Paraguay in Mercosur, the South American trade bloc.

"In November, the growing interest of Turkish businessmen in our country showed us what the country represents, its economic stability, its discipline, the opportunities it offers as a gateway to Mercosur, and the young platform that Paraguay has with people under 30 years old representing 70% of the population," he said.

The content of bilateral trade has diversified during the past two years, Palacios stated.

"We export soybeans to Turkey. We also need to increase exports of nontraditional products such as sesame, leather and textiles. This year, among the main exported products are cotton, oil seeds, oleaginous fruits, charcoal, broad beans, beans, seeds, soybeans, bran and other residues of the sifting of cereals," the foreign minister said, indicating that the commercial exchange with Turkey is concentrated in "traditional products of the export basket of Paraguay – mainly soy – and therefore very susceptible to the price/market ratio."

"We are waiting for the presence of a veterinary inspection mission that would probably come in the second quarter of the year and that would make Paraguay able to export meat to Turkey," he added.

In the area of art and culture, the foreign minister highlighted the increasing popularity Turkish soap operas and their importance in introducing Turkish culture to the continent.

"(Turkish) Ambassador Armağan İnci Ersoy is mainly working to increase the cultural relationship. The broadcast of Turkish soap operas, for example, reaches more than 150 countries worldwide and inspires the culture of that country to reach out geographically to strengthen the distant relations we have. In tourism, the great Turkish experience also constitutes a possibility of learning for Paraguay," he underscored.

Turkish TV series have had a positive impact on the South American market, in Argentina and Brazil in particular, from where Turkey welcomes nearly 250,000 tourists a year. Latin American people find Turkish productions relatable and appreciate an alternative to historically dominating Western productions.

He also reiterated the Turkey Scholarship program as a significant opportunity for Paraguay.

"About 30,000 students have graduated from university and postgraduate studies in Turkish institutions, including three Paraguayans, and the challenge is to increase the number of applicants," Palacios said.

The foreign minister noted that Paraguay’s president is set to visit Turkey in March 2020.

"And in that regard," he stated, "the culmination of negotiations for the signing of the Agreement for the Promotion and Reciprocal Protection of Investments is aimed at granting greater predictability and legal certainty through a stable legal framework for investments and investors of both countries in order to increase and strengthen economic relations between the two nations."

Although Turkey has had diplomatic contact with Latin American countries since the 19th century, relations remained stagnant due to geographical distance up until the early 2000s. However, with the establishment of the Action Plan for Latin America and the Caribbean in 1998 and the declaration of 2006 as the Year of Latin America and the Caribbean in Turkey, relations gained new momentum. From that point on, the two sides began to pay reciprocal official visits. Brazil even built a strategic partnership with Turkey to strengthen relations and in 2006, the Turkey-Brazil High-Level Cooperation Commission was established.