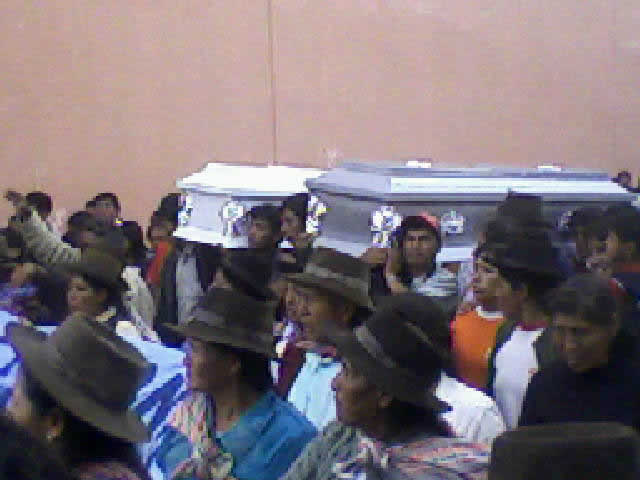 Feb. 19 2008 (Bloomberg) — Peru’s government declared a state of emergency after a farmers’ protest left at least four dead and more than 700 under arrest.

The government granted the armed forces control over the departments of Lima, Ancash and La Libertad in a bid to free about 1,000 stranded buses after protesters battled police and blocked roads and railway lines, Cabinet Chief Jorge del Castillo said today.

``The state can’t remain impassive faced with this situation,’’ del Castillo told reporters in Lima. ``These measures are severe, but absolutely necessary to safeguard order in the country.’’

Farmers called the nationwide protest to push for state subsidies as part of a free-trade agreement with the U.S., for lower prices for fertilizers and for a halt to farm seizures by banks. Peru, the world’s largest exporter of organic coffee, asparagus and paprika, boosted agricultural exports to the U.S. and China by 10 percent to $2 billion last year.

``The agreements we’ve reached don’t establish amounts or deadlines,’’ said Enrique Malaga, president of the National Irrigation Board, which is organizing the protest. ``The government has lost all credibility.’’

Thousands of passengers were stranded around the country without food or water, according to footage broadcast by Lima- based television station Canal N. Edinburgh-based photographer Martin O’Donnell said his wife and 4-year-old son had been trapped in the southern Andean desert of Majes for 48 hours.

``You don’t expect to be put in this situation,’’ O’Donnell said in a telephone interview from Scotland. ``My family is stuck in the desert and we haven’t heard anything from the government.’’

One protester was killed in a shootout with bus passengers on the north coast, and three others died during fighting with police in the southern Andes, Lima-based Radioprogramas reported.

February inflation will be faster than expected because of a limited supply of fruit and vegetables from the north coast, said Roberto Flores, an analyst at Lima-based brokerage SAB Centura.

``Distribution problems might aggravate in coming days, provoking a temporary increase in some products’ prices,’’ Flores wrote in a report today. ``Blocked roads will also affect agro- exporting companies, as their products will face difficulties to arrive to the Callao port.’’