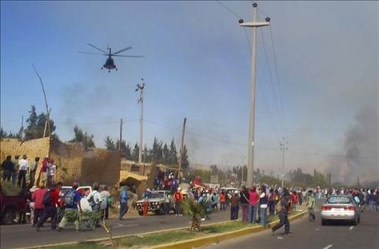 The actions, the latest in a series of protests held to demand the government do more to spread the wealth from a six-year economic boom, came on the eve of a nationwide general strike called by Peru’s largest labor confederation.

Farmers are frustrated by the rising cost of living, want debt relief and say a free-trade deal being implemented with the United States will flood local markets with imports of subsidized U.S. agricultural goods. They are also upset at a recent law that will make it easier for investors to buy land in Peru’s interior.

"It’s not just one law, but all the legislative decrees we are protesting against," said Antolin Huascar, head of a national farmers’ group, referring to edicts Garcia has signed to bring Peru into compliance with the U.S. trade deal. Congress gave Garcia temporary powers to issue the decrees.

"The strike is a wake-up call to the government," Huascar said.

Garcia, whose approval rate hovers near 30 percent, has said the trade agreement will help lift incomes in a country where some 40 percent of the population lives in poverty.

He has also said union protests risk frightening foreign investors, who he believes have helped turn Peru into one of the fastest-growing economies in the world. Last year, Peru expanded some 9 percent. 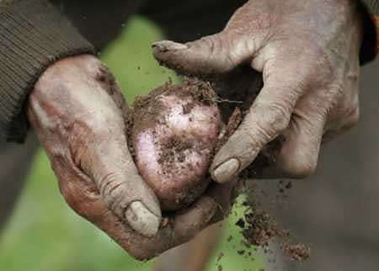 The farmers’ protest against Alan Garcia’s free trade agenda is the latest in a series of mobilisations to demand a better distribution of wealth in Peru (Photo: Enrique Castro-Mendivil/Reuters)

Farmers blocked roads in Ayacucho, Cuzco, Puno and Huaraz, said an official with Peru’s highway police. He added that traffic on the Pan-American highway, the major road on Peru’s coast, was flowing freely.

The main rail company that runs to Machu Picchu, Peru’s top tourist destination, said it was stopping service until Thursday because of security concerns related to the strike.

Big mines in Peru did not report any immediate impact. Antamina, the copper-zinc pit owned by BHP Billiton and Xstrata among others, said its operations in Huaraz were not affected.

Antamina has a duct, the mining version of a pipeline, that carries minerals straight from its mine high in the Andes mountains to the Pacific coast.