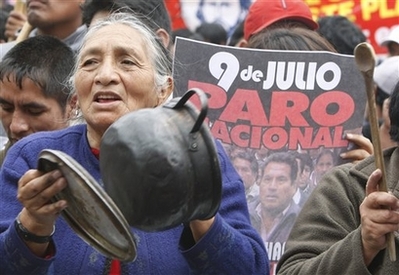 LIMA, Jul 14 (IPS) — The Peruvian capital, faced with rapidly rising cost of living, was the epicentre of protests calling for fulfilment of social and wage agreements signed by the government. Although only one violent incident occurred, some 200 demonstrators were arrested.

Protests by farmers and indigenous communities early last week were joined by a mass demonstration by teachers, construction workers and state employees in Lima and several other cities and towns. The general strike also included roadblocks.

New street protests were called for Thursday in some Amazon regions, in response to decrees issued by President Alan García, making it easier for private investors to enter the territories of native communities.

The decrees were set in motion thanks to the powers granted by the legislative branch to the executive under the free trade agreement (FTA) signed with the United States. Political analysts say the government has exceeded its legal powers.

"This is not a strike by terrorists, or people seeking to destabilise the country, nor Chavistas [supporters of Venezuelan President Hugo Chávez]," said the secretary general of the National Confederation of Peruvian Workers (CGTP), Mario Huamán, stressing that these were peaceful demonstrations.

The only exception was in the Amazon region of Madre de Dios, where the seat of local government was set ablaze.

For his part, Interior Minister Luis Alva Castro called the day of protest a failure, and said that 11,000 police officers were deployed and that 200 demonstrators had been arrested. The government also mobilised a number of military troops, triggering condemnation from social leaders and political analysts who consider that the armed forces lack the training and experience to deal with demonstrations.

"We can learn from every situation, and the government accepts its own lesson, without triumphalism or defeatism, because it knows that it must continue to work, as it has set out to do, for the poor of Peru," said García when he summed up the impact of the strike and hinted that he recognised that many of his promises had been broken.

The CGTP is demanding urgent measures to curb the cost of living, pay the wage increases agreed with workers, and change the free-market economic model imposed by García.

With respect to the economic model, the CGTP wants the government to tax the windfall profits of mining companies arising from the sharp rise of mineral prices on the international market. This was one of García’s electoral campaign promises, along with a wide-ranging tax reform plan that would ensure a more equitable distribution of resources.

Regional labour organisations — also participating in the strike — are invoking not only the CGTP’s demands, but also the fulfilment of several undertakings signed by the executive branch.

In the two-and-a-half years that the Peruvian Aprista Party (PAP) has been in government, García has signed 35 agreements with social organisations and local and regional authorities, of which, according to the Conflict Prevention Unit of the Presidency of the Council of Ministers (PCM), more than 60 percent have been fulfilled.

However, the protest organisers say only between 15 and 30 percent of the agreements have been fulfilled.

"It’s a hoax. The government calls for dialogue when we protest, and then doesn’t do as it promised because it prefers to maintain centralised power," the head of workers’ organisations in the southern Andean region province of Cusco, Efraín Yepez, told IPS.

According to Yepez, the government has only fulfilled 15 percent of the agreements reached with his region. The main demands of Cusco are that construction of a gas pipeline and an international airport get under way.

"I understand their desperation, but we are making progress with the technical plans for these projects, because we must invest responsibly. Everything is part of a process," PCM coordination adviser Juan Manuel Figueroa told IPS.

A similar situation exists in the Arequipa region, which borders Cusco. The government says it has fulfilled an average of 70 percent of the agreements, which include the construction of the southern gas pipeline and the Majes Siguas II irrigation project.

But social organisations and local authorities report that the projects are delayed. For instance, in the case of Majes Siguas II, the government promised that the tendering process to choose a contractor for its construction would be completed by August, but the project’s economic feasibility study has not yet been done.

The PCM said that several of the projects that the regions are complaining about are now in the hands of Proinversión — a government agency promoting private investment in the country — and offices of the executive branch including the Transport and Finance Ministries.

"They are no longer in the hands of the PCM," Figueroa said.

Regardless of which government department is responsible for the delays and non-fulfilment, it is clear that the regime has become discredited.

In July 2007, the executive branch committed itself in writing to the Federation of Administrative Workers in the Education Sector (FENTASE) to pay the workers an increase of 100 sols (35 dollars) a month, but one year later the promise is still on ice.

FENTASE went on indefinite strike more than 20 days ago. "They have not included us in the national budget, although we are the worst paid state workers. Why do they make promises they aren’t going to keep?" asked FENTASE secretary Juan Silva Julián.

Figueroa’s reply was that, owing to the international context, the government decided to prioritise "the welfare of the majority, by subsidising oil," in order to mitigate the rise in food prices, before dealing with sectoral demands.

He also said that a technical proposal to make it possible to pay workers the wage increases promised has been sent to the Finance Ministry.

Analyst Carlos Reyna told IPS that one of the main hurdles to the government’s fulfilment of its commitments to social organisations is the free-market economic regime that it is trying to maintain, and its centralisation of power.

Other reasons have to do with President García himself. "Part of the population find him disagreeable, and he is aggressive in his dealings with social leaders. That does not help in conflict management," Reyna said.

In fact, the government broadcast a publicity spot that portrays Vladimiro Montesinos — an adviser to former President Alberto Fujimori (1990-2000) - - who is now in jail for crimes against humanity and corruption, in order to discredit the strikers.

The spot shows part of Fujimori’s ongoing trial, in which Montesinos says that the United Trade Union of Education Workers of Peru (SUTEP) never went on strike in his day.

SUTEP publicly denied Montesinos’ statement — reporting that during the Fujimori administration the union had held as many as six strikes — and protested the possibility that state funding had been used for the spot.

A local television channel showed an invoice for producing the video spot on which the PCM appears as the client. Prime Minister Jorge del Castillo said that was a mistake, and that the PAP had really paid for it.

While the government shot itself in the foot on last week, social conflicts keep growing. According to the governmental Ombudsman’s Office, 16 new conflicts started in June and six were reactivated, bringing the total to 86.

In addition, the CGTP announced that on Nov. 4 it would convene a National Peoples’ Assembly to broaden the social base and consolidate the opposition.