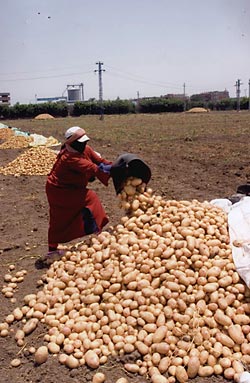 A ban by the EU on Egyptian potato exports threatens to break into a commercial dispute, Mona El-Fiqi investigates

Potatoes are once again a hot topic of contention between Egypt and the European Union. A couple of weeks ago, following the discovery of some cases of brown rot, the EU decided to impose a ban on Egyptian potato exports. An Egyptian-EU agreement stipulates that should brown rot be found in more than five shipments, all Egyptian potato exports will be prevented from entering the EU market. And while Egypt has insisted that only four cases have been found, the EU says that it has discovered six.

Brown rot is a bacterial disease which infects potatoes but is not harmful to humans. In an attempt to resolve the issue, negotiations are currently underway between the Egyptian government and EU officials.

Last week the Ministry of Agriculture and Land Reclamation submitted a file to the EU expressing its rejection of the ban on the basis that it contravenes World Trade Organisation regulations. Meanwhile, the EU accuses the Egyptian authorities of not applying strict measures to avoid exporting infected potatoes.

In reality the Egyptian government believes that the reason behind the move is to protect local European produce from competition.

At any rate, a high-level delegation of Egyptian officials will fly to Brussels to attend a bilateral meeting scheduled for 17 September. The meeting will discuss technical issues and regulations relating to Egyptian potato exports prior to the meeting of the European Standing Committee on Plant Health, set for 23 September.

For many years Egypt has been exporting potatoes to the EU, and in fact potatoes are among the key agricultural exports to the EU. According to Ministry of Agriculture figures for 2009, the total volume of Egyptian potato exports was 334,607 tonnes, of which 203,000 tonnes were exported to EU member countries.

The exportation process is regulated by a bilateral agreement. This agreement states that Egyptian potato exports are banned from entering the EU unless the harvest was cultivated in one of the pest-free areas — namely, certain areas on the Nile Delta and some virgin desert areas that have been approved as brown rot-clear. The agreement grants Egypt an annual quota of 250,000 tonnes, and Egypt almost fulfils this quota. The regulations also give Egyptian potatoes the privilege to enter EU countries duty- free during three months of the high season, starting 1 January through 31 March every year.

"This season there was a problem since the EU customs authorities discovered six interceptions on Egyptian potatoes that are infected with the brown rot disease," said Christophe Besse, counsellor and head of the trade section at the delegation of the European Commission in Egypt. Besse further explained that according to the agreement, five interceptions are allowed during a season but when it reaches six interceptions, importing potatoes from Egypt is banned.

The decision according to Besse will not have a negative impact on the Egyptian exporters since "the high season of exporting potatoes to the EU is between January and April, and it can be extended to June, so the season is already finished."

Higher up, however, the decision has caused a dispute between the EU and the Egyptian authorities on how the six interceptions should be counted. Expressing the EU’s view, Besse explained that the counting is based on lots. In other words, if the lot contains six pieces of potatoes that are infected by the brown rot, the importing process stops immediately, regardless of the code number of the basin where the potatoes are cultivated. The Egyptian point of view is different: in the past interceptions were based on the infected basins, not on infected lots.

Gamal Abu Kahla, export department manager at agricultural product export company Sonac agreed that the counting system should be based on the code number of the basin. "If the interceptions registered the EU customs authorities reached six from different basins, the EU has the right to stop the shipment, but this is not the case." Abu Kahla added that in his view, "what happened was nothing but an administrative mistake due to the change of European officials who are responsible for the issue."

The cancellation of the ban needs, according to Besse, a comprehensive analysis of the problem by the Egyptian government and a proposal containing measures to avoid the repetition of the problem during the coming season. Moreover, he said that the Egyptian authorities should reinforce export certification procedures.

As for the control system applied by the Egyptian authorities, Abu Kahla said that the pest-free areas are well checked. Samples of water, weeds, and soil are taken, in order to ensure that they are all free from brown rot disease.

Further, the Egyptian exports inspection system is one of the best in the world but "brown rot is difficult to control since exports are checked by taking samples. For example 200 potatoes are checked as samples from each lot, containing 25 tonnes," Abu Kahla explained.

El-Haddad asserted that the export of potatoes to European countries is tied to strict internal Egyptian rules which have been derived from EU and Food and Agriculture Organisation directives and regulations," El-Haddad said.

Moreover, the Potato Brown Rot Project, an affiliate to the Ministry of Agriculture, aims at achieving the highest standards in its sampling and testing procedures as well as ensuring complete monitoring of the potato production process including transport, storage and packing, from the moment of importation of seed potatoes to the point of export. According to El-Haddad, Egypt has the right to submit an official complaint to the World Trade Organisation (WTO) since the ban is against the regulations of both the WTO and the Food Organisation Authority.

In response to the decision the Egyptian government carried out its own investigations that confirmed four cases of brown rot infected potatoes. El-Haddad added that some actions had been taken immediately such as suspending the potato exportation from the suspected codes, detaining the harvested potatoes and sister lots from suspected codes in the packing stations. Among these is the fact that the authorities are holding all documents related to the suspected lots in order to verify their validity, while imposing appropriate penalties on case exporters, producers, packing station operators and inspection teams that have not followed regulations for producing and exporting potatoes to the EU.

Official investigations and tests showed that soil samples taken from some basins are indeed infected. The traceability system proved that this infection is due to the transfer of organic manure from previously infected areas to these basins.

It is important to note that the exporting companies produce organic products so that they use organic manure in fertilisation. El-Haddad said that the Potato Brown Rot Project recommended that the whole area where the infection originated should be de-listed from the list of pest-free areas. And in fact this is what the government has done. Following the eruption of the problem Rachid Mohamed Rachid, minister of trade and industry, issued a decree stating that companies violating the system as well as the packing station have been suspended for three exporting seasons. Moreover, the inspection team responsible for checking the potato lots in question has been penalised.