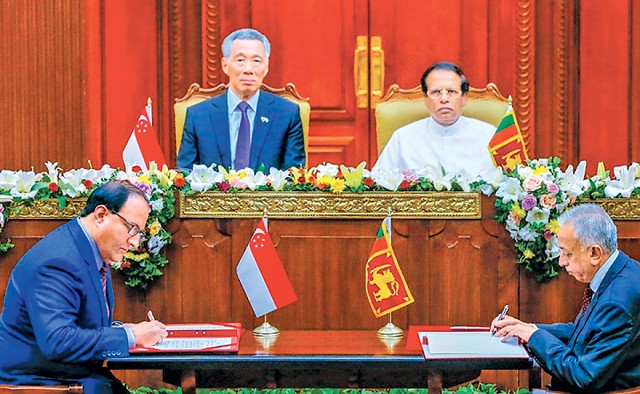 The top professional bodies representing engineers, architects, town planners and quantity surveyors and other related professions this week charged that the government has rushed into signing the Sri Lanka-Singapore Free Trade Agreement (SLSFTA) without having proper legal frameworks in place to ensure job security of local professionals and the possible entry of under-qualified overseas professionals.

Addressing a press conference at Sri Lanka Institute of Architect’s auditorium, the Institute of Engineers of Sri Lanka (IESL) President Dr.Niranjanie Ratnayke said the professionals submitted a 42-page report to the government before signing of the SLSFTA, providing specifics of the legal frameworks, which were needed prior to the opening of the services sector.

She also said the report contained details on sectors where there’s a shortage of professionals, but charged that the government did not take the suggestions in it into consideration.

Sri Lanka Institute of Architects (SLIA) President D.H. Wijewardane said an assurance was given by the Development Strategies and International Trade Minister Malik Samarawickrama in writing in July 2016 that the legal frameworks would be in place prior to signing any FTA.

“However, actions were extremely slow while negotiations on FTAs proceeded independently. Also the establishment of a human resource authority to figure out human resources requirement, which is a prime requirement, did not see the light of the day,” he said.

He pointed out that the few measures taken by the government to formulate a trade policy, streamline the immigration laws, strengthen professional institutes etc. have been very slow and they are all at the initial stages.

IESL Vice President Arjuna Manamperi pointed out that the service sector liberalisation is not black and white concerning the liberalisation of goods with a positive and negative list.

Even though, the SLSFTA has not liberalised the mode 4 of service sector liberalisation, which allows movement of natural persons, Sri Lanka has allowed Singaporean firms to bring unlimited number of experts and professionals through investments and allowed Sri Lankans to receive online services from Singapore-based firms. “For example, Singaporean architect firms can now render their services to Sri Lankan customers online through mode one,” he said.

“No discussions took place with professionals regarding schedules of commitments. When we met the minister and other officials on October 27 last year, we requested to take a look at the final draft of schedule of commitments. However we were not given another meeting until the SLSFTA was signed,” Manamperi said.

Speaking to Mirror Business, a top government official denied these charges and said that the Development Strategies and International Trade Ministry has addressed the several prioritised recommendations of the professionals in the 42-page document including the anti-dumping legislation while the Minister of National Policies and Economic Affairs and Minister of Internal Affairs are preparing to present Cabinet paper, which includes draft immigration regulations to regulate the movement of people between the two country.

The official further stated that the government has requested the professionals to send the prioritised proposals to the ministry within two weeks and the professionals have agreed to do so. The official said the government will consider these proposals and discuss them with Singaporean officials during the one-year review period of SLSFTA, to be included in the trade pact.

The official further pointed out that if the government were to implement all of their recommendations prior to entering into FTAs, Sri Lanka would have not been able to enter into any FTA at least for 5 years.

However, the government official assured that flexibility will be much less with India and China in terms of both services and goods.

The official said during China-Sri Lanka FTA negotiations, China had insisted Sri Lanka to recognise Chinese professional qualifications in engineering and architecture under the proposed FTA.