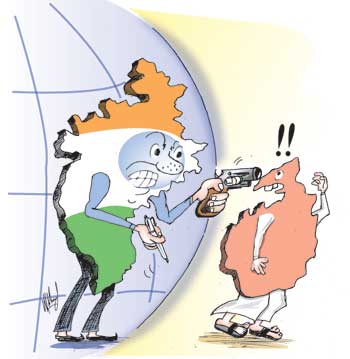 CEPA is seen by some as a trade invasion from India

A large group of Sri Lankan entrepreneurs, businessmen and workers launched a protest outside the Liberty Plaza complex at Kollupitiya yesterday, opposing the CEPA trade agreement with India.

They shouted slogans and alleged that CEPA would lead to the downfall of many local industries. They shouted anti-CEPA slogans urging the government not to allow an Indian trade invasion of Sri Lanka. They displayed placards saying, "Not to sign CEPA - harmful for Sri Lanka," "India - Do not create problems in Sri Lanka" and "Stop an Indian trade invasion of Sri Lanka." The protest was held amidst an ongoing seminar on the Indo-Lanka trade agreement organised by the Institute of Policy Studies in Colombo to mark the 10th anniversary of the accord.

The protest comes ahead of President Mahinda Rajapaksa’s planned visit to India. The President is scheduled to visit New Delhi early next month.

The President’s Office said that over 1,000 employees and directors of many leading companies, lawyers, doctors and other professionals met President Rajapaksa at the Temple Trees, where they asked him not to proceed with the proposed agreement.

Sources said that the President had assured them that he would not sign any agreement detrimental to the country.