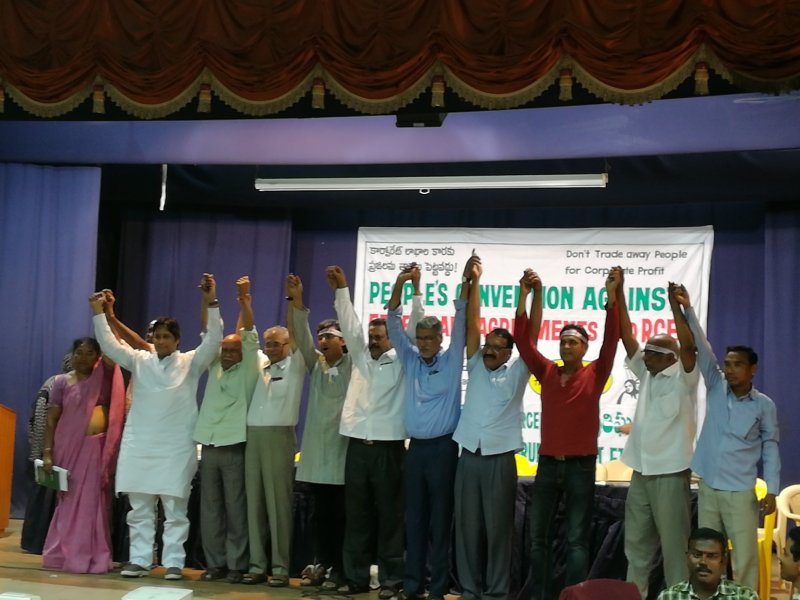 Over 600 protesters, including farmers and urban labourers, will hit city streets on Monday to protest against Regional Comprehensive Economic Partnership (RCEP), a Free Trade Agreement, which India is expected to sign along with other countries in Association of South East Asian Nations (ASEAN).

In a brainstorming session organised on Sunday, the protesters who converged on Hyderabad from across States including Kerala, Karnataka, Tamil Nadu, West Bengal and Nagaland, among others, declared that they wanted India to halt the RCEP talks which were expected to be held here from July 24 to 28. Among those who attended the meet in solidarity was M. Kodandaram, Chairman of the Telangana Joint Action Committee who criticised the Union government for “selling out people’s lands and jobs for the benefit of Multi National Corporations”. The four day People’s Convention Against FTAs and RCEP which commenced on Sunday also had speakers from other Asia Pacific Countries including Thailand, Philippines, Indonesia and Japan.

RCEP experts, including Prof. Biswajit Dhar of Jawaharlal Nehru University, pointed out that the agreement would lead to corporate giants claiming patents in seeds to control the seed sector. It could also result in cheap imports which would adversely affect the price of crops, protesting farming sector organisations said. RCEP could also affect the livestock sector which is currently reliant on Indian cattle breeds.

The meet also witnessed fiery speeches from grassroots workers. “There are four crore hawkers among the workers. Along with our families we will be 20 crore. After farmers who will lose rights over seeds, hawkers who live on daily vending will lose out to market leaders in corporate sector whose products India will import,” said Shaktima Ghosh, president of the National Hawkers Federation who spoke at the meet. Among those affected by RCEP are traditionally deprived communities, including Dalits and Adivasies, activists said.

The meeting also had a huge turnout of women protesters. “Forty five acres of land in Tamil Nadu was recently converted to petroleum fields. There are many such cases where land is grabbed by corporates. We should occupy our land and rescue ourselves from the grip of RCEP,” said Burnad Fathima from Asia Pacific Forum on Women, Law and Development.

By a jointly signed resolution, members of the people’s convention asked the government to give public access to all negotiations. “Hold extensive and meaningful consultations on FTAs with farmer unions, trade unions and people’s organisations,” a resolution passed by the meet read. The civil society also asked the government to debate RCEP in Parliament before deciding to implement it.

Protests will start at 9 am at People’s Plaza on Monday. It will be followed by a workshop at Sundarayya Vignana Kendram at Baghlingampalli.