Protests in Sri Lanka over proposed trade pact with India 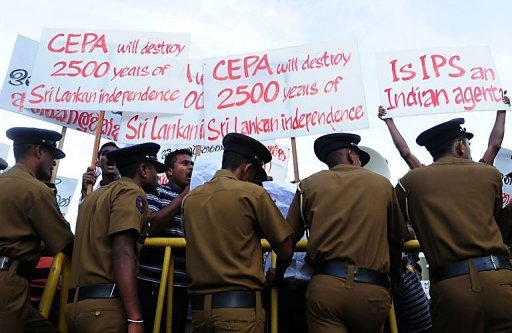 President Mahinda Rajapakse met the demonstrators at his tightly-guarded Temple Trees residence in Colombo and vowed he would not enter any pact that was harmful to the island’s economic interests.

"Professionals, including doctors and engineers, came to Temple Trees and protested against the CEPA with India," the president’s office said, referring to the proposed Comprehensive Economic Partnership Agreement.

It said the president, who is also the finance minister, assured them that he would not go ahead with "any pact or agreement" that was not in the best interest of the island.

"The government will not enter into any pact or agreement that is inimical to its people and economic interests," the statement said. The protests came two weeks ahead of a proposed visit by Rajapakse to India.

The CEPA had been proposed almost two years ago but had been held up due to opposition from Sri Lankan business leaders who fear that the island could be swamped by cheaper Indian services.

The two South Asian neighbours entered a free trade deal in 1998 limiting tariff concessions to goods, but the CEPA covers services such as banking and allows greater cooperation between customs administrations.

The bilateral trade balance is heavily in favour of India. Sri Lankan exports to India amounted to 418.3 million dollars compared to imports of 3,443 million dollars from India in 2008, according to the latest trade figures.