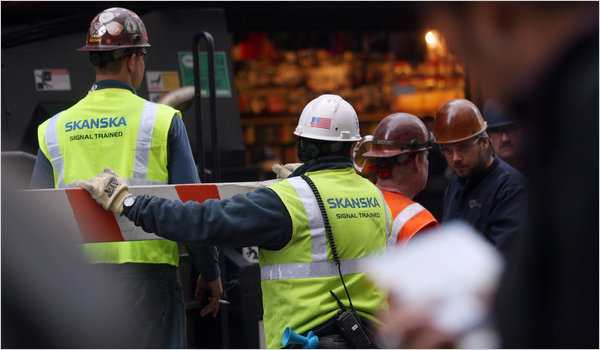 Public procurement could be next TTIP deal breaker

As EU-US negotiators prepare for a new round of transatlantic trade talks in New York next week, officials fear TTIP might run into a new brick wall: Public procurement.

The warning came from the European Parliament, where the International Trade Committee was holding a hearing on Wednesday (20 April).

German MEP Bernd Lange, an SPD lawmaker from the Socialists and Democrats (S&D) group who chairs the committee, said public procurement could turn into a TTIP deal-breaker as negotiators seem stuck in boasting the openness of their own public contracts market.

“There has been something of a ‘beauty contest’ over which country is the ’most’ open in terms of public procurement in recent years,” said one analyst at the European Centre for International Political Economy (ECIPE), a think tank.

“And the EU has appointed itself as the fairest in all the land,” he added.

If Europeans estimate that the “de jure” openness of the EU procurement markets is at roughly 85%, against 32% for the US, American officials told EurActiv.com that EU firms have more guaranteed access to public tenders in the US.

Taking the World Trade Organisation Government Procurement Agreement (GPA) as proof, the US said it guarantees access to markets worth approximately $320 billion per year. Meanwhile, the EU covers approximately $333 billion, but only guarantees that US can compete for half of that amount —roughly $158 billion— officials claim.

According to US Trade Representative Michael Froman, the Federal Government spends approximately $500 billion annually for a wide range of goods and services and the EU has guaranteed access to approximately $200 billion – or two-fifths of federal procurement. This $200 billion is not subject to restrictions like the Buy American Act, the Berry Amendment and the US SME programme.

But here is the hick. The EU says European firms face discrimination even on those two-fifths of accessible public procurement.

A source in the European Commission’s trade directorate told EurActiv that even though some European companies have found a way to comply with the stringent domestic restrictions and win public contracts in the US, they have been obliged to change their supply chains and even establish their production in the US.

For example, the US procurement market for buses and public transportation is severely restricted for European suppliers, the EU official said. These restrictions are linked in particular to the Buy American Act, which requires that all steel and iron is produced in the US.

Things get even more complicated when going to the sub-federal procurement level, which stands at 60% of total public procurement in the US. While US officials say they provide guaranteed access to EU companies for $120 billion annually worth of contracts, the EU contends that the figure is overestimated.

“Federal money comes with strings attached,” said the EU official, stressing that this practically means that the most valuable infrastructure procurements are excluded from the GPA scope.

“Whatever the claims of ‘actual openness’, the reality is that the US federal government applies a ‘Buy American’ policy on federal procurement and on procurement which the Federal Government funds,” the EU official added.

Not Buy American, but Buy Transatlantic

Such rules make it more cumbersome for European SMEs to access large projects as subcontractors.

The EU would welcome a privileged agreement where “we would get rid of all the strings attached,” said the EU source. “Why can’t we transform the ‘Buy American’ into a ‘Buy Transatlantic’?” he wondered.

Europeans claim this could be a way of solving the mind boggling exercise of tackling the lack of proper statistical data, and finalise talks before President Barack Obama steps down in 2017, averting a potential new era of uncertainty for TTIP, depending on his successor.

EU Trade Commissioner Cecilia Malmström and US Trade Representative Michael Froman have met face to face three times in the last two months, as well as having regular calls. The European Commission is handling the negotiations on a mandate handed to it by EU leaders.

Malmström said in Washington last March that she wanted to settle major differences over US “Buy American” government procurement standards, how to resolve investment disputes, and over Europe’s many geographical rules that govern food products from Parma ham to feta cheese, by the summer.

Both trade partners also said in February that they hope to make significant progress in consolidating texts, as part of this planned increase in momentum.

Even though EU officials do not expect an offer on public procurement at the upcoming negotiating round, the burning issue will stand high over the talks.

The issue might well come up during talks between German Chancellor Angela Merkel and US President Barack Obama, who will meet on Sunday in Hannover.