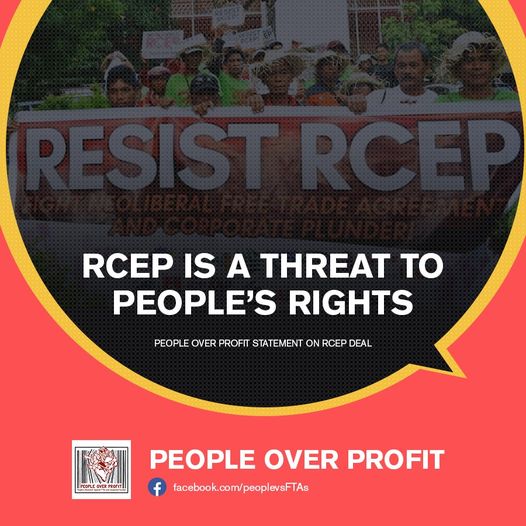 RCEP, a threat to our rights - POP

The 37th ASEAN will go down in history as the day when one of the biggest trade partnerships in the world was signed by 15 Asia-Pacific nations. The Regional Comprehensive Economic Partnership (RCEP) will cover a huge chunk of the world’s trade volume and world economy. This translates to 30 percent of global GDP and 38 percent of the global market shares. For its proponents, RCEP will usher in a new era of free trade, a milestone for corporate elites to celebrate. For much of the Asia-Pacific population, however, it is yet another cross to bear. Its abolition is a just cause to fight for, as it will only widen inequalities, further drag the vulnerable into abject poverty, and give rise to human rights violations.

The conclusion of RCEP comes at a time when the COVID-19 pandemic crisis is being used as a pretext for new neoliberal reforms or policies and for accelerating existing ones. Neoliberal agents such as the international financial institutions - World Bank, International Monetary Fund, AIIB, among others - are offering more and more loans to developing countries under the guise of COVID-19 response and recovery, including countries heading towards debt crisis. These loans come with attached conditionalities, usually in the form of policies and programs aimed at trade liberalization and privatization or deregulation of public assets and services – the hallmark of the neoliberal agenda. History has shown how these conditionalities have only created poverty, environmental damage, displacement, and landlessness. The RCEP does not stray from this; in fact, its implications are so grave that the strong clamor against the Partnership is not surprising. For this reason, deliberations are generally exclusive. Documents are largely unavailable to the public and the meetings were held clandestinely, without any representation from the marginalized sectors that will be most affected.

The RCEP is not just about the removal or reduction of tariffs. The Agreement covers wider issues such as environment regulations, intellectual property rights, and dispute settlement mechanisms. With its emphasis on trade liberalization, the RCEP will follow the tradition of existing free trade agreements and structural adjustment programs, particularly of the Asian Development Bank. This will allow the private sector or transnational corporations (TNCs) to impose cheap labor and ignore international standards on working conditions. It can create an environment hostile to collective bargaining and exercise or labor rights as well as foster conditions that enable widespread contractualization and mass lay-offs.

RCEP will legalize unfair practices and creation of poverty, not only in labor but also in the agriculture sector. The removal or reduction of import tariffs, coupled with provisions that allow private investors and large corporations to greedily extract resources ,will not only lead to massive income losses for local producers as they try to compete with the influx of cheaper, foreign products.

This will also lead to land-grabbing and environmental damage, similar to the outcomes of previous free trade agreements. In other words, it deprives many farmers of their basic livelihood. Because this mega trade deal accelerates land-grabbing and extraction of natural resources, this agreement will also result in further militarization of rural and indigenous peoples’ communities, leading to more cases of human rights violations as people struggle for their home, livelihood, and ancestral domain.

Moreover, the RCEP will undermine the farmers’ right to use and share farm saved seeds, as well as their right to the protection of traditional knowledge and to share in the benefits from the use of plant genetic resources for agriculture. It is through intellectual property that the RCEP can also allow giant pharmaceutical companies and agro-corporations to rake in profits at the expense of people’s access to affordable healthcare and seeds. RCEP provides for the extension of pharmaceutical patents, more stringent data exclusivity, and allows for private players to sidestep national laws on public health safety nets. It also has a provision for eliminating the production of generic medicine in the market, which is inhumane given the fact that many developing countries in the Asia-Pacific struggle with decrepit healthcare systems. It is cruel to the poor majority and comes at a time when the entire world is grappling with a health crisis worsened by the pandemic.

It is therefore unsurprising why India opted out of the deal, citing its possible adverse effects to its local industries, and why Thailand was reluctant at the beginning. The pandemic did not stop the proponents of RCEP in fast-tracking the deal, as meetings continued in a virtual setting. This makes further sense if juxtaposed with the fact that China is currently in a tariff war with U.S., and is maneuvering to expand its economic and political power in the region. Rich countries stand to gain the most in RCEP, with China as the biggest winner, while developing countries risk losing whatever little control they have over their local industries.

Above all else, the pandemic has exposed the need for countries to fix their own defective systems of social services – healthcare, education, social insurance, among others – to better cope with crises. COVID-19 has exposed the need to build self-reliance among nations. By joining the RCEP, countries that are already in a debt crisis, with poor systems of social services, and without genuinely independent basic industries, will only have a wider chasm between the rich and the poor.

RCEP is a threat to people’s rights. Thus, it is imperative that the people push back the neoliberal narrative of RCEP and confront the corporate dictates over economic and political policies. Now more than ever, the people must claim their rights to shape their own economy, espouse people-centered development such as genuine agrarian reform, sustainable production and consumption, as well as to independently decide their own path to development through national policies.