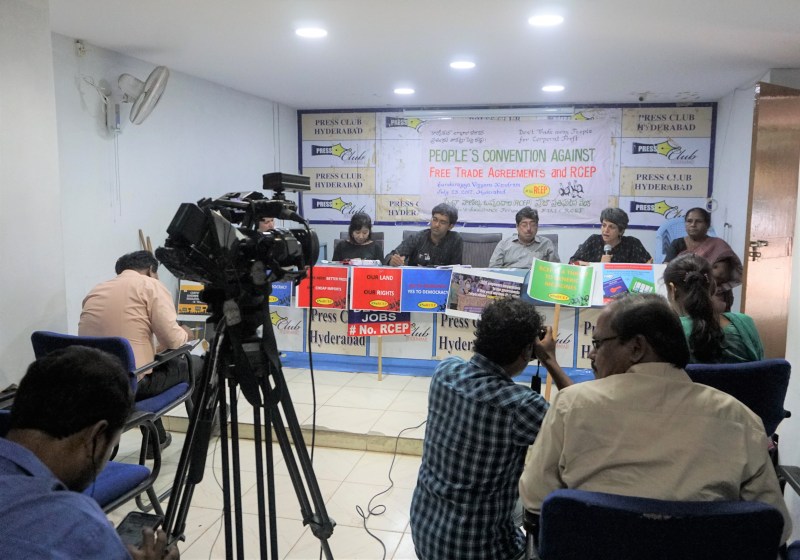 Since the 2014 coup, we have witnessed some serious degradation of people’s rights, from political, economic and social, as well as setbacks to environmental protection and the livelihood of communities. Women human rights defenders have increasingly become at risk of violence, discrimination, and other violations. After four years under the military regime, at least 222 rural women HRDs have faced trial in court simply for defending their right to land, livelihood, and community while the state continues to give concessions that impact the communities and the environment.

While there is an urgent need for reforms and measures to protect our public goods, the Thai government is about to enter a trade deal that could seriously harm the reform agenda and deprive communities of the ability to make decisions for fear of violating investors’ rights.

As Bangkok is hosting the 23rd round of negotiations for the Regional Comprehensive Economic Partnership (RCEP), a proposed multilateral trade agreement involving Asean members and six other countries is cause for concern for Thailand’s ability to reform and improve the quality of life of its people through various mechanisms. This is because RCEP ensures that the signatory governments will not undertake anything that will decrease or impact investor costs and/or present and future profits.

This means that if Thailand goes ahead with reforms, even by the introduction of new and necessary laws and policies, the investors (be it the corporations, its shareholders including original and subsequent shareholders) have the right to take legal action against the government of Thailand as provided for in the Investor-State Dispute Settlement (ISDS) clauses currently proposed in the RCEP.

Worse still, these legal actions commenced against Thailand will not be adjudicated according to Thai law, in Thai courts, or in Thai tribunals but in a secret tribunal in a foreign country according to non-tangible trade and investments rules. It will cost Thailand billions of baht to defend such claims, and if Thailand were to lose, it may be forced to pay billions more — and all this will be the money that Thais could have used for improving their quality of life.

In 2015, UN experts pointed out that governments are less likely to pass laws essential for advancing rights including women’s rights because of a fear of being sued. In a statement, they said that the problem has been aggravated by the "chilling effect" that intrusive ISDS awards have had, when states are penalised for adopting regulations, for example, to protect the environment, food security, access to generic and essential medicines or raising the minimum wage.

There are quite a few real-world examples of what can go wrong. The Veolia group, a French multinational, is suing the Egyptian government after a rise in the monthly minimum wage, using the ISDS provisions in an investment treaty between France and Egypt. Will Thailand be able to increase minimum wages in the future?

In Peru, the mining operations of Doe Run caused environmental destruction so bad that the mining area, La Oroya has been repeatedly declared as one of the most polluted places in the world. When the Peruvian government revoked the mine’s licence, it was slapped with a lawsuit. Imagine if the Thai government is sued by Kingsgate for ceasing the operations of a mine for environmental impacts. How will this affect Thailand’s ability to introduce more stringent environmental and health protection regulations or discontinue mining operations for the benefit of the Thai people?

This trade agreement means that Thailand may not be able to introduce better labour laws, laws requiring employers to make greater contribution for social protection schemes of workers — which may include an obligation to provide creches/daycare facilities at the workplace, better maternity/paternity rights, introduce additional paid leave for women including more maternity leave and even introducing "menstruation" leave. It will also mean Thailand will not be able to introduce laws requiring safer working environments, or even laws requiring a greater environmental protection.

Many argue that such trade agreements will enhance economic growth but are Thai people willing to sacrifice a better quality of life in exchange for such "economic growth"? One must also be concerned whether this "’economic growth" will really ensure better equality or whether it will just end up in the pocket of a few rich and elites.

And women are always at the bottom. Women human rights defenders who defend their community resources will become even more of a target due to increasing pressures from corporations. Women are the first to lose jobs when their employers cut staff and the first to be affected when public services are curbed. This then forces them to either migrate or take up any work in order to survive.

More importantly, if the Thai state is truly concerned about the well-being of its people, especially women, it needs to ensure democratic representation and participation of the people before it enters into any trade agreement. Thailand certainly will not want to end up with its hands tied up by such agreements, ruining the chance of a future where reforms are brought to improve the livelihoods and rights of its people.

Pranom Somwong is the representative of Protection International in Thailand and a member of the Asia Pacific Forum on Women, Law & Development (APWLD). She is a human rights lawyer and has dedicated her life to protecting people whose rights have been violated.