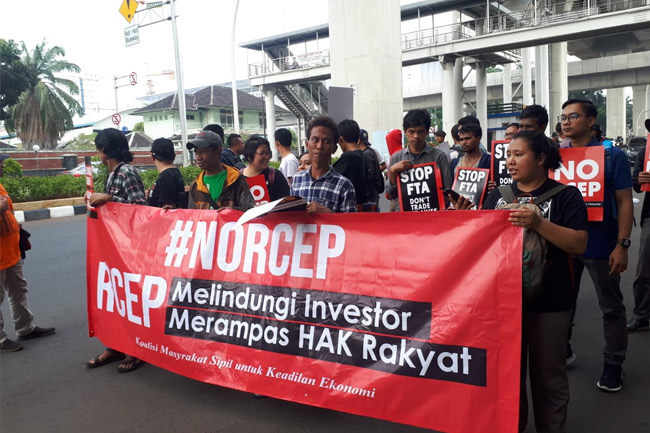 RCEP negotiations in ’final stages’, should be completed by 2019 or early 2020: Chan Chun Sing By Joanna Seow

Negotiations for the Regional Comprehensive Economic Partnership (RCEP) are in their final stages, though there will be some "tough trade-offs required", Trade and Industry Minister Chan Chun Sing said on Monday (Sept 2).

"With a bit of political commitment from all sides, we can probably just cross the finishing line sometime by the end of this year, if not the early part of next year," he said.

If signed, the pact comprising the 10 member states of Asean plus Australia, China, India, Japan, New Zealand and South Korea will be the world’s biggest regional trade agreement.

Together, the countries cover a third of the global economy.

During an interview with CNBC ahead of the Asean Economic Ministers’ Meeting in Bangkok, which starts on Tuesday, Mr Chan said that the RCEP provided an opportunity for all the countries to work together despite bilateral differences between some of them.

"Bilaterally, it might be very difficult for you to come to an agreement over your differences but with a multilateral platform such as this, it actually affords you another avenue to resolve some of the issues and to keep (the) relationship on a stable keel even if you have your bilateral differences," he said.

RCEP negotiations have been ongoing since 2013 but progress has been slow due to differences among some of Asean’s trading partners.

At the end of a ministerial meeting in Beijing early last month, the number of concluded chapters remained the same as a year ago, at seven out of 18.

But the countries involved agree that at this point in time the RCEP is no longer just about the economic agreement, said Mr Chan.

"It has gone beyond that. It is a strategic signal to the world’s economy on what countries in this part of the world believe in," he said.

This comes amid the threat of de-globalisation and the worry that the world will be fragmented into different trading blocs, although Mr Chan said a bright spot is that efforts are still ongoing to integrate the global economy, especially on the new digital front and in production processes of supply chains.

Amid these uncertainties, Singapore is focusing on long-term fundamentals and continues to diversify its trade, he said, adding that the Government is "quietly confident" in the investment pipeline.

Investments brought in by the Economic Development Board in the first half of this year, excluding two significant investments by the integrated resorts, exceeded expectations, he said.

"And it’s not just the quantity of investment but also the quality of investment... So overall, we are happy with what we have, and the kind of investment that’s coming into Singapore are long-term plays. They are those with a high intellectual property content that cannot be easily displaced.

"They come to Singapore because of our superior connectivity not just in the air, land, and sea dimensions but also in the data, the financial dimensions. And I think people want a safe harbour amid times of uncertainties," he said.

Mr Chan added that Singapore protects intellectual property and has progressive rules and regulations that keep pace with the needs of businesses.

When asked about the possibility of business from Hong Kong being diverted to Singapore due to the turmoil in the territory, he again said that Singapore is more concerned about quality and not just quantity of investments.

"Businesses are always reallocating their resources and making sure that they minimise the risk to their entire portfolio. So they are constantly juggling those risks. There might be some coming over but I think we are not just looking at the numbers but we are also looking at the type of investments that we are able to attract," he said.