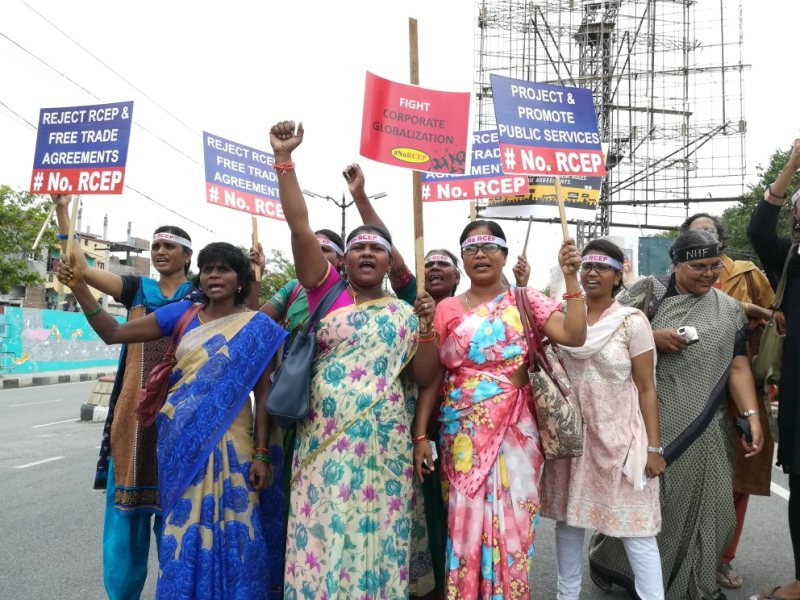 ‘RCEP will hit economically backward women the most’

Women who have little claim over capital will further lose their stake in the economy with the implementation of the Regional Comprehensive Economic Partnership (RCEP), women’s groups, especially those representing traditionally marginalised sections, including Dalits and Adivasis, vouched.

On the day that global leaders commenced discussion on RCEP, a Free Trade Agreement to be signed between Association of South East Asian Nations (ASEAN), including India, women’s organisations led the protest march against it at Necklace Road.

As RCEP is expected to impose constraints on domestic non-trade policies, which impact agriculture, health, environment, investment, telecommunications, visas and labour, women who are dependent on small-scale merchandising, public services, including natal and post-natal health care, will be deprived of their subsistence, grassroots workers said.

Since women traditionally had limited access to cultivable and non-cultivable land, relaxation of corporate land ownership rules will further make them landless. The most affected will be women-headed households in India, 23 million of which are in rural areas. Socio Economic Caste Census-2011 data had revealed that 10.11% of households headed by women in rural India earn less than ₹5,000 per month. In Andhra Pradesh and Telangana, the proportion of single member female-headed households is more than 20%.

Speaking to The Hindu, Banamallika Choudhury, a women’s rights activist, and member of Asia Pacific Forum on Women, Law and Development (APWLD), said, “In Assam, for instance, a number of women depend on cultivating land using seeds which they save from the previous harvest. They are subsistence farmers. There are provisions in RCEP which patents seed ownership and it deprives the women of their right over seeds”.

RCEP is also expected to affect the fisheries sector, 60% of which is managed by women in States such as Goa. “If corporate fishing takes over, fisher women of Goa will be edged out. Already, mines have taken over their livelihood,” said Albertina Almedia, a Goan woman activist.

Sr. Lissy Joseph of National Workers Movement said “out of a total of 20 lakh domestic workers in AP and Telangana, over 90% do not get minimum wages.

With this trade agreement, unorganised sector workers could be denied benefits, including Employees’ State Insurance, which we have been demanding for several decades”. Activists said RCEP, which focuses on export economy rather than domestically focused economy, does not offer safeguards on basic security, benefits and decent working conditions.

Once deprived of resources, tariffs and subsidies, women’s dependency rate will increase, activists said. According to the World Bank, India occupies 120th place among 131 countries when it comes to female workforce participation rate (27%). APWLD’s Regional Coordinator Kate Lappin pointed out that women who are dependent on affirmative action could be affected most, as was the case in South Africa where corporate groups sued the government for implementing reservation.