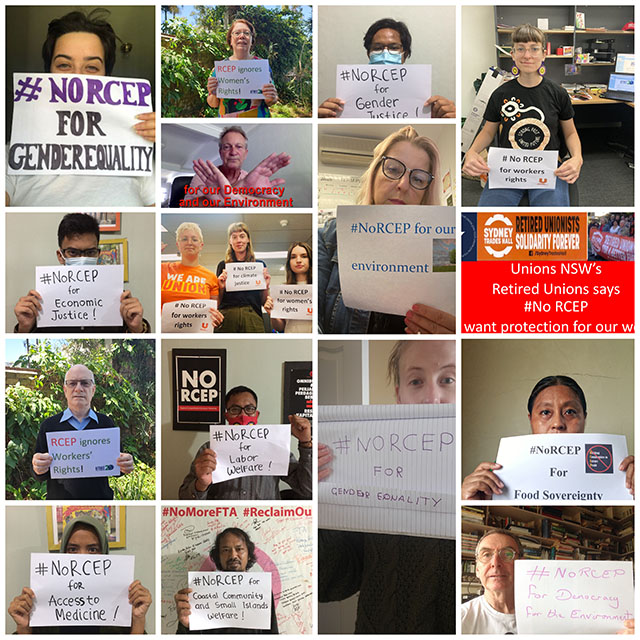 RCEP will impact the future of developing countries

In a webinar held on 10th November, economic experts, business owners, civil society organisations and parliamentarians expressed their concerns about RCEP, a mega free trade agreement which is likely to be signed on November 15, 2020. Despite concerns being raised, governments have continued to negotiate RCEP in the midst of the COVID-19 pandemic and global uncertainty.

Jomo Kwame Sundaram, Former Assistant Director General for Economic and Social Development in FAO, explained that the disruption of economies is not only due to COVID19 but also the undermining of multilateral arenas affects most countries. “If we are serious about trade, especially in this difficult time, we should rethink how you can reconfigure the world and develop new capacities of our own economies, including much more consistent with sustainable development objectives and more egalitarian ways”.

UNCTAD Senior Economist, Rashmi Banga said FTAs like RCEP may further restrict policy and fiscal space of developing countries. In her analysis based on SMART methodology, assuming tariffs are removed on all products between RCEP countries, she finds that for most ASEAN countries imports post RCEP will rise more than their exports leading to worsening of their balance of trade with respect to RCEP members . Developing countries are more vulnerable and are expected to be hit harder and will take more time to recover. “ASEAN countries can only benefit from RCEP if they can really use the potential on Regional Value Chains which should link with the Global Value Chains. But mostly in regional cooperation, such as RCEP, most ASEAN Countries will lose the preferential access, and that access will go to more efficient producers and exporters, but how many countries in ASEAN can really compete with China ?”, she added.

Kate Lappin, Asia Pacific Regional Secretary from the global federation of workers in public services, Public Services International, stressed that “FTAs such as RCEP would also increase the pressure on governments to privatise, as public services need to be traded and compete on the market. This will have negative impacts on equality, including corrosive impacts on gender equality.” “With the pandemic, the rules have demonstrated their effect on the government’s ability to respond to a crisis. Countries had to resort to multiple measures that can be construed as breaches of the trade rules in RCEP and other free trade deals. Singing on RCEP will bind the hands of governments in taking measures in the public interest in crises to come, be it health or environmental. Further, she said that free trade rules shift the weight of who has power in the economy away from workers and in the hands of MNCs and narrow economic interests. In fact, by constraining the policy space of future governments, deals like this are constraining the potential for future por-worker governments to alter the economic rules,” she concluded.

Ian Syarif owner of PT Sipata Moda Indonesia, a local textile company, said that free trade agreements like RCEP will bypass trade diversified opportunities and give most benefit to the organized country like China that has the sole focus on industrial efficiency. RCEP will also increase possible transshipment activities where goods will be shipped to other RCEP participating countries with zero tariffs and eventually re-exported to Indonesia, by passing the trade remedies that the government has imposed. “We think it’s hard to pull back from this agreement, we tried but the government has been quite closed about RCEP”, Ian added.

Jayen Mehta, Senior General Manager, Amul Cooperative, India, explained how signing the RCEP could have led to loss of livelihood for 50 million rural milk producers and about US$40 billion revenue loss yearly to farmers. “A grassroots movement led by millions of milk producers and farmers in India including nationwide protests forced India to withdraw from RCEP negotiations”, he stressed.

Prior to the signing, the text of RCEP has not been made available to the public. It is important for both parliaments and the public to be able to provide critical inputs regarding the contents of RCEP as it will have a broad impact on human rights. Barry Coates, Trade for All Advisory Board, from New Zealand expressed concern that free trade agreements are signed in secrecy. “The idea an international agreement will be signed without prior scrutiny, without an assessment of its impact is unacceptable”, he stressed.

Member of the National Assembly, South Korea, Jang Hye Yeong, also shared concerns regarding the lack of transparency of RCEP text. “The Korean Government has not released any information on RCEP except the chapter names. There are a few days left but if the final text is received after conclusion of the deal, we will continue to have discussion in the national assembly during the ratification process”, she added.