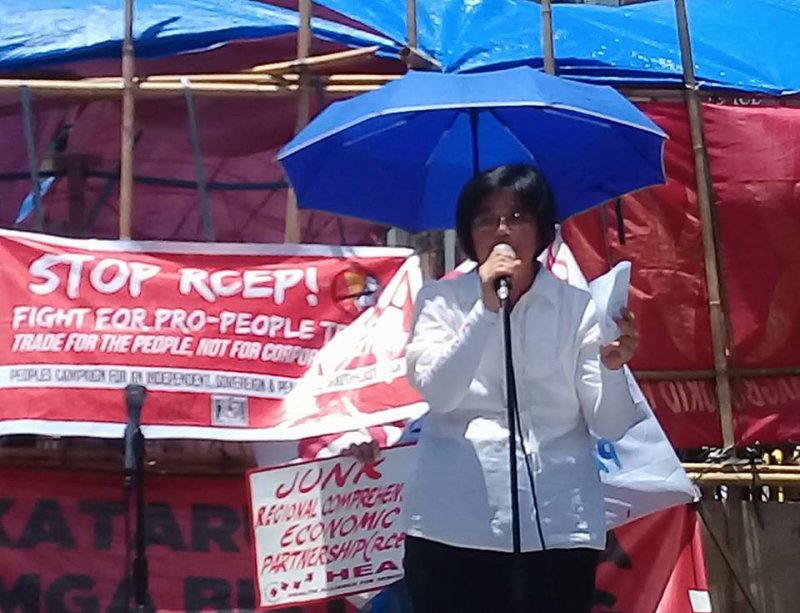 Research group IBON urged Philippine negotiators to reject proposals that may further restrict the policy options of the country in regulating foreign trade and investment.

IBON made the appeal as it joined other cause-oriented groups in a dialogue today with trade officials from the Philippines and other countries that are negotiating the Regional Comprehensive Economic Partnership (RCEP) in Manila. It stressed that RCEP and other modern free trade agreements (FTAs) target whatever is left of poor countries’ sovereignty in national economic policy-making.

The group said that as an underdeveloped economy, the country needs flexibility and independence in policy making to ensure that the national interest is protected when dealing with foreign goods and capital.

IBON cited as example the proposals reportedly obliging RCEP members to freeze existing national foreign trade and investment laws and drop performance requirements on foreign corporations. The standstill on national laws is meant to guarantee that the Philippines will not reverse current policies that already allow the domestic entry of foreign goods and capital.

Performance requirements, meanwhile, are measures that government uses to compel foreign investors to fulfill certain conditions to operate in the country. These provisions are being discussed in the RCEP in the context of giving foreign investors a “fair and equitable treatment”.

But IBON argued that such proposals would further tie the hands of the Philippines in determining the appropriate policies and programs on foreign trade and investment. It pointed out that a standstill on national laws under RCEP would deprive the country of the policy option to reverse or even just scale back its aggressive liberalization.

Under RCEP, for instance, among those expected to be hit hard is rice with local production declining amid a massive surge in imports. But a standstill on current policies on rice including the lifting of quantitative restrictions by July this year under the World Trade Organization (WTO) would prevent any meaningful intervention from government to protect this socially sensitive sector. Almost 20 million Filipinos who directly or indirectly rely on the rice industry including 2.5 million small palay farmers would be affected.

In addition, the planned restriction on the use of performance requirements under RCEP would undermine more the capacity of government to regulate foreign investments in a manner that serves the local economy. Performance requirements include policies such as requiring foreign investors to source locally produced goods; to export commodities only after substantial domestic processing; and to hire and train local technical people, among others. These requirements ensure that foreign capital helps build linkages in the local economy, helps strengthens rather than stunts domestic industries, and transfer technology and know-how.

IBON emphasized that investment regulation is just one of the many issues and concerns that the public must raise with the country’s trade negotiators in RCEP. Four decades of liberalization should give more than enough insights and lessons for the Philippine government to seriously reexamine the proposed regional FTA, the group said.