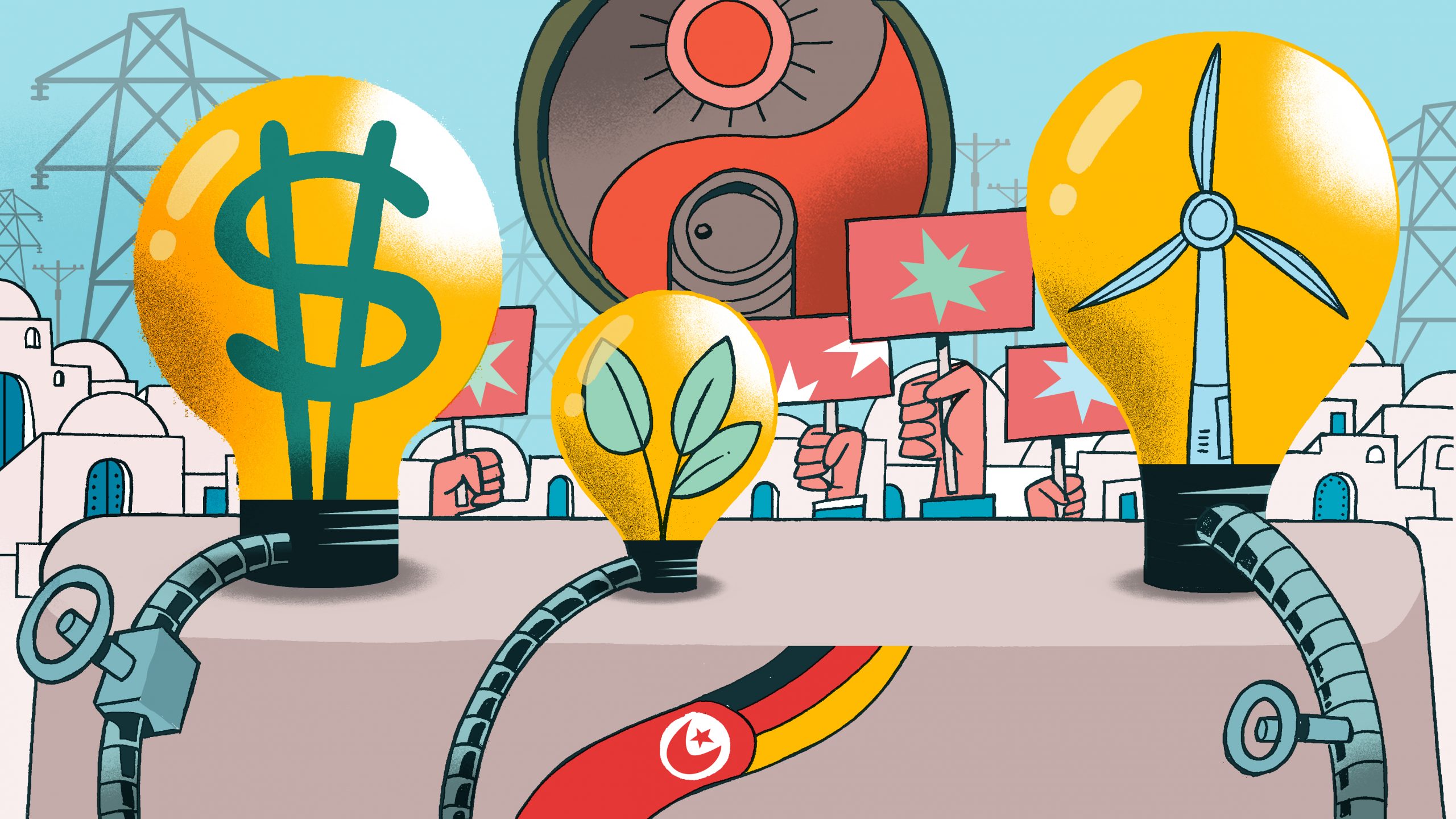 The energy transition in Tunisia is being promoted by international actors, some of whom are connected to previous projects that have aimed to develop renewable energy in northern Africa for export to Europe. One of them, Desertec, was centred around an ‘unrestricted flow of cheap natural resources from the Global South to the rich industrialized North, maintaining a profoundly unjust international division of labour’, as Hamza Hamouchene has described.24 Comparable to Desertec, Nur Energy (a UK-based company) and Zammit Group (based in Malta) are the main stakeholders of the TuNur project, which aimed in its early days to establish a giant solar power plant in the region of Kebili, with the purpose of exporting the produced electricity to Europe through cables under the sea. This project organized a powerful lobby that sought to obtain the inclusion of provisions relating to exports in the renewable energy legislation, against resistance from the state electricity monopoly.25 The role of international actors in influencing domestic policies has been well-documented in the field of renewable energy, especially as regards the German–Tunisian relationship in this sector. Germany, which is a pioneer in the area, sees in Tunisia a high potential to be tapped. Accordingly, since the 2012 German–Tunisian partnership on energy, Germany has been providing technical and financial support through industrial investments and the establishment of institutes and foundations in Tunisia. The latter seek, among other things, to influence political parties by promoting ‘green’ development ideas.26 These actions, carried out in the context of bilateral cooperation, have had some repercussions in relation to the Tunisian regulatory framework.

In fact, some recommendations made by the German development agency, the German Corporation for International Cooperation (GIZ) and Desertec Industrial Initiative (Dii), seem to have anticipated some of the measures contained in the 2015 law. The official motives of German cooperation are said to be beneficial for the development of Tunisia, particularly in relation to employment.27 Germany’s actions in Tunisia fit into the context of European Union (EU) activities in this area. A 2015 communication by the European Commission about the strategy for an Energy Union clearly expresses the European Union’s (EU’s) wish to encourage and develop renewable energies, notably through international cooperation with non-EU countries.28 This would be done within the framework of the Energy Charter Treaty (ECT), which was established in the early 1990s. In fact, the European effort to involve Tunisia in this process dates back to 2013, when the country was approached by the ECT secretariat, through the mediation of the German embassy, to join the treaty within the context of its ‘MENA Project’ of expansion in the region. The country’s membership of the ECT is still under discussion.29 The ECT includes provisions on foreign investments in the energy sector, including in relation to investor–state dispute settlement (ISDS). This tool gives corporations the power to sue governments when they consider that states’ policies are detrimental to their profits, even if those policies aim to foster an energy transition or social rights that are in the public interest. ISDS claims have already delivered billions of dollars of taxpayers’ money to big corporations and the mere threat of ISDS therefore constrains states in their policy design, thus interfering with democratic processes.30

Following the principles set out in the ECT, the EU is seeking to deepen liberalization in order to standardize the Tunisian legislative framework through negotiations around the Deep and Comprehensive Free Trade Agreement (DCFTA) (ALECA being the French acronym). This liberalization offensive would undermine the state’s capacity to regulate – sometimes against investors’ interests – and therefore would facilitate the introduction of European investors (who benefit from the EU’s extensive subsidy programmes) into the Tunisian market. This would eventually open the way for exports, thus ensuring energy security for Europe, rather than for Tunisia.31 For European companies, accessing the Tunisian market means increased cost-effectiveness and competitiveness because of lower salary and fiscal charges and the transfer of environmental costs. The pressure exercised on Tunisia, and the lack of consultation of civil society in the DCFTA negotiation process, have been already pointed out.32