Results: THE POWER OF No 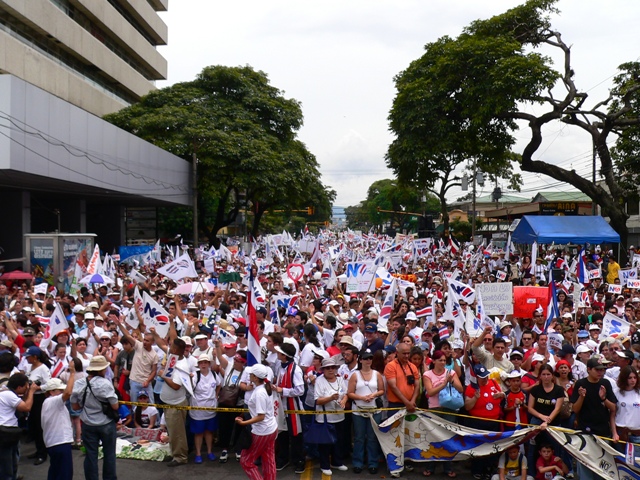 "The Power of No" was the name given to the celebratory activities organized by Mujeres contra el TLC (Women against CAFTA) on September 29, the day before the biggest event against the proposed free trade agreement with the U.S. known as CAFTA that would be held on September 30th.

"We wanted to feel and celebrate our power - said Maria Suarez Toro, one of the organizers of The Power of No - "not only to give us strength before the massive Great Victory March (Gran Marcha del Triunfo) convened by all the social movements as the final demonstration before the referendum, but to make visible the enormous and diverse contributions women, including feminists, have been making to the Patriotic Movement against CAFTA."

Over 600 women and quite a few men gathered in tents placed in the parking lot and a music stage in the auditorium of the Law Faculty of the University of Costa Rica to participate in as many of the activities they could possibly join in the few hours before the big concert.

Under white tents flanked by pieces of the beautiful banner which had been embroidered or colored and then sewn together in what Mujeres contra el TLC call The Banner of our Dreams (La manta de nuestros sueños), participants could learn from young feminist activist Marcia Ugarte how to be one of the 26,000 "fiscales" (supervisors) during the day of the referendum or simply get more information about the referendum or about CAFTA at the Information Tent; go place a complaint at the Legal Tent if they knew of irregularities or violations of their electoral rights; embroider, sew or color one more piece of the "manta" under the Banner Tent, participate in two hearings with women from Mexico and other Central American countries who have already ratified free trade agreements with the U.S. at the Feminist Observatory of Transformational Politics Tent; join a press conference to publicize the Nobel Peace Awardees’ Declaration of Solidarity with the Women of Costa Rica or share their views with the world with radio program "Petatera", Radio Mujeres del No or with Feminist International Radio Endeavor under the FIRE Tent.

And, at 2 p.m., just as the rain started, everyone ran to the auditorium for the most inspirational activity of all: the concert with women musicians from Honduras, Nicaragua and Costa Rica interspaced with videos by Costa Rican videomakers, Sonia de la Cruz and Ana Lucía Faerron and messages from many diverse women as well as one by the leader of the Patriotic Movement Against CAFTA, Eugenio Trejos, the only male speaker for that day.

"It was so exciting to see our power being celebrated by so many women artists and musicians and so many feminist activists" said Daysi Flores, a young feminist from Honduras who came to the event as a member of the Feminist Observatory of Transformational Politics, "I was especially moved by Carla Lara because she comes from my country and it makes me proud to know that we Hondurans are in solidarity with you brave Costa Rican women. Besides, I am convinced that this loud NO to CAFTA that you Costa Ricans are shouting will be heard all over Central America. This will give us hope to continue resisting this new form of Patriarchy we call corporate capitalism."

"I felt a flood of hope opening not only for this beautiful country, but for all of Central America", added Paquita Cruz, artist and activist against CAFTA, "I could feel the power of so many women who that same day all over Central America were standing in front of the Costa Rican embassies in solidarity with our dream and our celebration."

"Women understand the need to learn the power of NO since early childhood - said economist Epsy Campbell, President of an opposition party - first we need to say NO to incest, to discrimination and even to exploitation by our own families and then we need to say NO to intimate violence, to pay discrimination, to rape and sexual harassment in our schools, jobs and communities. As mothers we know we must say NO to any agreement, any law or policy that endangers our children’s food, education and health."

Exaggerating the typical pronunciation of the letter "r" which Costa Ricans pronounce very differently from other Spanish speakers, Flora Fernandez, leader of Women in White, an organization that has been very creative in its opposition to the treaty, began her message by saying "Que RRRico (how delicious) to say NO to corruption, NO to the sale of our dignity, our beaches, our water, our natural resources, NO to the logic of the market! And how "rrrico" our victory will be when we know that we stood up to the political and economic powers of this country, to which a woman from the audience shouted back, "and how "rrico" it will be when men respect our NO." 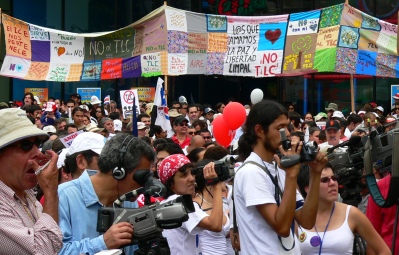 That is precisely why Mujeres contra el TLC decided to celebrate the power of NO. They wanted to share with each other and with men the urgent need women all over the world have for their NO to be heard and respected. And also, for their NO to be recorded so that it will be remembered as women will need to continue to resist the new forms of Patriarchy.

That is also why the voices of Guadalupe Urbina, Maria Pretiz and Amigos Intimos from Costa Rica, Elsa Basil from Nicaragua and Carla Lara from Honduras, the percussion of Gladis Chiny and the acoustic guitar of Larissa Coto came together in one sonorous NO that hopefully will be victorious this 7th of October.

But even if NO does not win, due to the millions of dollars spent on publicity by the Yes people and to the fact that the President himself is traveling all over Costa Rica’s slums offering houses, paved streets and schools to the desperately poor if their district votes YES, the NO will have been heard and the Power of NO will have been felt by thousands of women and men in this country and in the whole region.

Yet Mujeres Contra el TLC wants more than the victory of NO. This time, they want to be recognized and remembered by the rest of the social movements as a force that must have a say in the construction of the new Costa Rica after the victory.

As feminists, they are tired of being erased from the historical records once a movement has reached its objective. "Feminists have participated in every revolution the world has ever lived through, and in every single one we were promptly disappeared once the revolutionaries were in power. All of us were denied the rights we were fighting for shoulder to shoulder with our fellow revolutionaries. Some of us were simply sent back home to do the dishes, others were ridiculed as not real women, and still others, such as Olympe de Gouges, got their heads cut off. Some, like Rosa Parks, were denied their dignity when the reasons for their amazing feats were trivialized and every single one of us was denied her collective history" comments Suarez. "This is why we are recording our participation. Hopefully this time it will be much harder for historians to disappear us."

"Wanting to be recognized as a force is important for achieving the real transformation we are seeking" adds Paquita Cruz, "we are not against this free trade agreement only because it is unfair, illegal, and will destroy what is left of the commons and all our natural resources, but also because we know that it will make it so much harder for us to construct a new way of being in the world, a new way of thinking and feeling and acting not centered around the market but centered around the reproduction, caring and nurturing of life on this planet. We say NO to a society that is so production oriented that it even permits the sale of human organs. As the Minister of Commerce stated when confronted with the fact that the supposedly purely trade-related agreement has a section on human blood, organs and bones, ‘the CAFTA treats human organs as any other merchandize.’ This minister is so unethically capitalist that he does not even begin to see a problem with treating human organs as merchandize. But when you think about it from a feminist perspective, the truth of the fact is that once you have a society where half of the people-women— are treated as merchandize by men, it is not hard to go from there to thinking that all human parts are just things to be negotiated at the marketplace."

Cruz added that "that is why we want to construct a society that is not patriarchal so that no human being and no human part can ever again be thought of as a thing to be bought or sold or hired out. We feminists need to protect our democracy, even if it is a patriarchal version, because only in a democracy are women able to dream and fight for something even better: a true democracy where women and men, nature and culture, reproduction and production are equally valued."

A Nobel Laureates Declaration signed by Nobel Awards such as Wangari Mathaai, Rigoberta Menchú, Jody Williams, Betty Williams and Sharin Ebaddi recognizes that Costa Rica’s democracy is an "endangered species" that needs to be protected. "Just like 60 years ago Costa Rica was the only country to abolish its army, today Costa Rica is the only Central American country that has not ratified the free trade agreement with the U.S. known as CAFTA, a treaty which, if ratified, would override the Constitution in most of the aspects which have made Costa Rica unique: this treaty encloses what is left of the commons, permits the production of weapons for export, treats human organs as merchandize and overrides the protection of the environment to name just a few of the women’s concerns...

...We know that the women of Costa Rica have struggled against the threats to human rights and the commons-actions largely absent from international and national media coverage. We know that the struggle to maintain Costa Rica’s democracy persists; as do the concerns about budget cuts to education and basic services and the increasing gap between the rich and the poor which according to the "State of the Nation" (Estado de la Nacion) has been getting wider for the past eight years. According to the same source, Costa Rica has been showing a growth in the impoverishment of women, thus also widening the gender gap."

That is why Mujeres contra el TLC has joined with the rest of the social movements to say a dignified NO to CAFTA, not only because it will be so bad for women, but because they reject the kind of neoliberal economics it imposes. They are convinced that the "free trade" and globalization ideologies this agreement forces on a small peaceful country like Costa Rica through what Naomi Klein describes in her new book as the Shock Doctrine, will destroy what is left of the type of democracy based on social solidarity Costa Ricans chose after World War II.

Not only do they not want to loose what they already have, they have heard what it has meant to Mexican women after ten years of NAFTA and to the rest of Central American women after a year and a half of CAFTA. "Costa Ricans are the only Latin American people who will be able to say NO to a free trade agreement with the United States" said a participant at the Feminist Observatory of Transformational Politics, "you must not misuse this right by voting "yes" on the 7th of October.

For more information visit http://www.mujerescontraeltlc.blogspot.com or email us at [email protected]