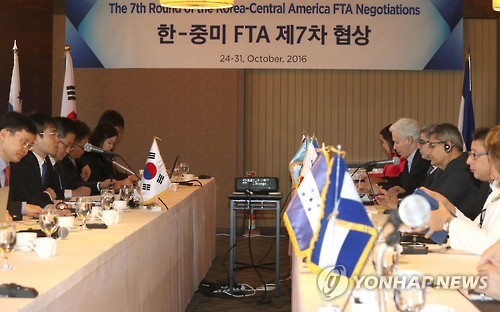 South Korea and five Central American countries will hold a technical meeting in Seoul this week for a final review of the full text of a bilateral free trade agreement.

The Ministry of Trade, Industry and Energy said on Sunday that the South Korean delegation and its counterparts from Guatemala, El Salvador, Honduras, Nicaragua, Costa Rica and Panama will start five-day talks on Monday in Seoul.

The ministry said that in the talks, the countries will conduct final checks of the text of the FTA and discuss the details for the signing of the pact.

The two sides have been working to complete the formal signing of the trade deal by the end of this year.

The final FTA text will be reported to the National Assembly after the formal signing. The trade deal will take effect after securing ratification by the parliaments of the respective countries.

The negotiations for the free trade agreement between Central America and South Korea started in June 2015 and was initialed in March this year.