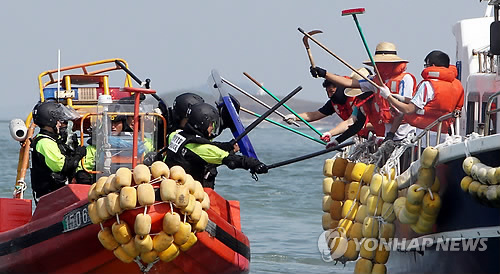 Special forces of the Korea Coast Guard simulate a crackdown on supposed Chinese fishermen in a drill to block illegal fishing by Chinese boats in South Korean waters, in the sea off the country’s western port county of Sinan, 385 km south of Seoul, on Sept. 12, 2012. Two helicopters and more than 20 boats were mobilized for the exercise. Unlawful fishing by Chinese fishermen has long been a headache for South Korea. [Yonhap]

SEOUL, Feb. 16 (Yonhap) — South Korea and China remain divided over a number of issues such as illegal fishing that may prevent early conclusion of their negotiations for a free trade agreement (FTA), officials here said Sunday.

"We are hoping to include a provision that can effectively prevent illegal fishing in the FTA, but China maintains it will not even discuss the issue," a government official here said on condition of anonymity.

Seoul is pressing the issue that has become a major diplomatic sticking point. The number of Chinese boats seized or cited for illegal fishing in the country’s Yellow Sea came to 4,605 between January 2004 and September 2013.

Sixty-nine South Koreans have been killed or injured since January 2003 while trying to catch Chinese ships operating illegally in South Korean waters, according to data from the Ministry of Oceans and Fisheries. Video clips from the scenes show Chinese boats fitted with high sides and tools that can be used as weapons to block inspectors from coming aboard.

The official said one way to prevent illegal fishing would be to stipulate in the FTA that the countries must provide certificates of proof that their shipments of fishery products are not from illegal catch.

In addition to differences over illegal fishing, the two sides are also divided over the degree of market opening for products and the service industry and over competition and intellectual property rights, the sources said.

Seoul is asking Beijing to remove its import tariffs on most industrial goods while China demands South Korea in return remove its import duties on farm products, the most sensitive items for Seoul in most FTA negotiations.

The countries have agreed to remove their tariffs on 90 percent of all products traded between them with future negotiations expected to set the exact list of goods to be excluded from the FTA.

China also remains reluctant to strengthen its protection of intellectual property rights, according to the officials. The issue is tied with protection of Korean cultural contents, mostly Hallyu products that include dramas and music.

"Negotiations up to now may have been aimed at confirming each other’s position," another government official said, asking not to be identified. "The government plans to conclude the FTA negotiations at an early date while working to minimize damage to the country’s economy."

South Korea and China have held nine rounds of FTA negotiations since they were first launched in May 2012. The 10th round is set to be held in South Korea next month.