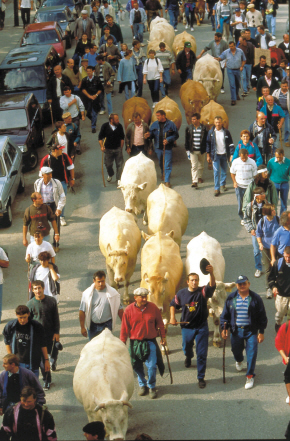 A photograph from when the mad cow disease swept through Europe in 1996.

According to a draft of the free trade agreement (FTA) between South Korea and the European Union (EU), once the FTA takes effect, European beef that has a higher risk for mad cow disease than U.S. beef could be allowed into the country.

A tentative signature draft regarding the trade of agricultural and livestock products for the South Korea-EU FTA released Monday by the Office of the Minister for Trade specifies that conditions “can be applied in accordance with the Sanitary and Phytosanitary Measures Agreement (SPS) and the standards and guidelines of the World Organization for Animal Health (OIE).”

The World Trade Organization’s SPS agreement has generally specified the conditions for trade in plants and animals, while the OIE establishes concrete standards regarding the importation of beef that carries a risk of mad cow disease. According to the OIE’s standards, sixteen nations are classified along with the U.S. as “controlled bovine spongiform encephalopathy (BSE) risk” nations, including Great Britain, Spain and Ireland. South Korea would be unable to block importation of beef from these nations.

More than 600 cases of mad cow disease have been reported in Europe since just 2006. Another 18 were reported in 2009, seven of which were in Great Britain and six in Ireland. Both nations are members of the EU.

“As South Korea leaves standards for beef importation to the judgment of the World Organization for Animal Health, a procedural barrier to the importation of European beef has been lifted,“ said Park Sang-pyo, who heads the policy office at Veterinarian Association for Public Health. The government’s decision to resume U.S. beef imports also followed in accordance with a U.S. demand based on the OIE standards.

The safety of European beef is a hotly disputed. According to the OIE web site, 623 of the 651 cases of mad cow disease that have erupted worldwide since 2006, or 95.7 percent, were concentrated in the European region. All 18 cases reported in 2009 occurred in Europe. The U.S. is currently blocking beef imports from the EU, citing safety issues.

The government has announced the establishment of a litmus test for inspecting the quality of European beef. In contrast with the draft agreement that prescribed relatively one-sided conditions for importation, the government added an additional item in the agreement process stating that beef exporting nations “must offer evidence to the importing nation that can objectively demonstrate that the region in question has no incidence of the disease or low possibility of the disease.” An official with the Ministry for Food, Agriculture, Forestry and Fisheries said, “According to the content of the agreement, if there is a problem with the quality of European beef, we are permitted to carry out a direct investigation and apply import restrictions based on our findings.”

However, the example of Canada, which has generated friction with South Korea over opening the beef market, indicates a strong possibility that things will not go according to the South Korean government’s expectations. When cases of mad cow disease appeared in Canada in 2003, the route for South Korean exportation of Canadian beef was blocked. After Canada was classified by the OIE as a “controlled BSE risk” nation in 2007, however, it demanded the same treatment as the U.S. and called for the market to be opened. Last April, it even brought a case against South Korea before the WTO. The government sees little possibility of winning the legal battle with Canada. In essence, as long as the OIE standards are specified in the FTA, South Korea will have difficulty finding a justification for blocking the importation of EU beef.