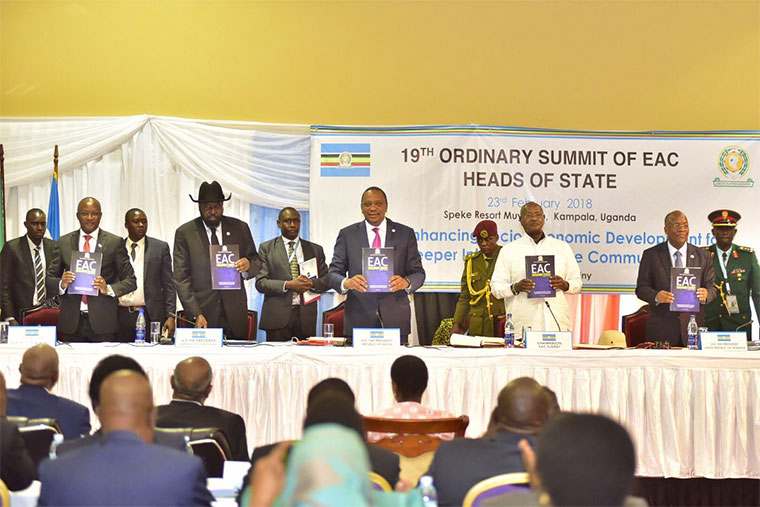 Setback for Kenya as regional heads dig in on EPA deal

Kenya will have to wait a little longer for a breakthrough in the crucial Economic Partnership Agreement (EPA) deal after regional leaders called for further negotiations with their European counterparts.

It emerged yesterday last week’s 19th Ordinary Summit of the East African Community (EAC) Heads of State in Uganda failed to reach a compromise on the trade treaty after the matter was deferred.

The leaders resolved that their host Ugandan President Yoweri Museveni - who as the Summit chairman late last year led a delegation of EAC leaders to Brussels to push for a new deal - returns to the negotiating table.

“The summit President visited the EU and engaged with them and raised the issues and a response was given. Some of the issues still lacked satisfactory answers and the summit agreed that he should go back for a second visit,” said new East African and Northern Corridor Cabinet Secretary Peter Munya in Nairobi when he took over office from his predecessor Phyllis Kandie.

During the September last year meeting, Museveni was mandated to engage with the EU to address concerns that some EAC partner States had on signing the EPA as a bloc. Kenya has put up a spirited fight to have all EAC countries support the EPA as a way of safeguarding unlimited duty-free access of its exports to Europe.

The agreement would guarantee EAC traders duty and quota-free access to the EU market in exchange for the gradual opening up of up to 80 per cent of the region’s market for European products.

Tanzania, the main opposer of the deal, has cited the economic and constitutional uncertainties arising from Brexit as the main reason for rejecting it.

Uganda, on the other hand, is yet to sign the deal despite making a U-turn on its earlier stance and saying it is ready to sign the deal, leaving Kenya and Rwanda that have signed the deal in limbo.

Yesterday, Mr Munya said among the contentious issues in the deal is the clauses on infant industries and whether allowing EU products into the region would kill its fledgling manufacturing sector.

“Infant industries is a big concern where the less developed countries want assurance that when they sign the EPA, they will not be adversely affected,” said the CS. He added that Kenya already had mechanisms in place to continue to access the Eurozone market but said the summit had stressed that the matter is addressed urgently.

Munya also hinted that Kenya could opt to go it alone since the summit considered the application of ‘pursuing, variable geometry’.

He said the EAC heads of State also agreed to harmonise the age limit for importing vehicles to eight years for environmental conservation and safety. Kenya will also lobby to host the Monetary Policy Institute in Nairobi when it is set up after the EAC leaders recommended the speeding up of the process.

“Kenya only hosts Lake Victoria Basin Commission, so we will apply for consideration when it is set up,” said Munya.

The East Africa Secretariat, however, faces a series of job losses after the regional heads decided it has to be leaner to survive the current limited resources.