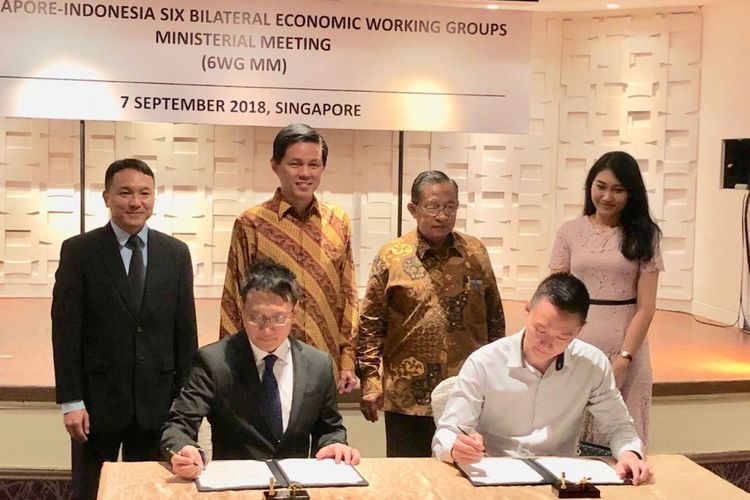 SINGAPORE - Singapore and Indonesia have agreed to conclude talks on a bilateral investment treaty between their countries before their leaders hold a retreat next month.

They will also speed up talks on the review of an agreement to avoid double taxation.

Minister for Trade and Industry Chan Chun Sing and Indonesia’s Coordinating Minister of Economic Affairs Darmin Nasution reached agreement on these points at a meeting in Singapore on Friday (Sept 7) to discuss economic cooperation ahead of this year’s Singapore-Indonesia Leaders’ Retreat in Bali.

The economic partnership between the two neighbours is set for a wide-ranging boost, with the two leaders agreeing at the meeting to deepen collaboration in industrial parks, namely Kendal Industrial Park in Semarang and Nongsa Digital Park on Batam island, tourism, and the digital economy.

They will also do more in training and capacity building, such as programmes for regional leaders, tie-ups between universities and technical skills development.

"Singapore and Indonesia reaffirmed the shared goal of ensuring a business-friendly environment and enhancing bilateral trade, investment, tourism, and connectivity," said the Ministry of Trade and Industry in a statement.

They signed a joint report that outlined the key initiatives and planned efforts, which will be submitted to the leaders of Singapore and Indonesia ahead of the leaders’ retreat.

The retreat is a long-held tradition in which leaders and ministers meet informally each year to take stock of ties and discuss ways to strengthen them.

Mr Chan and Mr Darmin also witnessed the signing of two agreements which will give their countries’ start-ups a leg up. The pacts were signed by Singapore’s Action Community for Entrepreneurship, a private-led initiative driving entrepreneurship, with Indonesia’s Skystar Ventures, a tech incubator and co-working space operator, and EV Hive, Indonesia’s largest co-working space operator.

Under the agreements, start-ups from Singapore and Indonesia will be able to tap each other’s networks to expand. This will give Singapore start-ups additional access points into Indonesia’s growing start-up scene, and enable Indonesian start-ups to expand beyond Indonesia.

Singapore and Indonesia share strong economic bonds, and are among each other’s top trading partners, with bilateral trade reaching $59.4 billion in 2017.