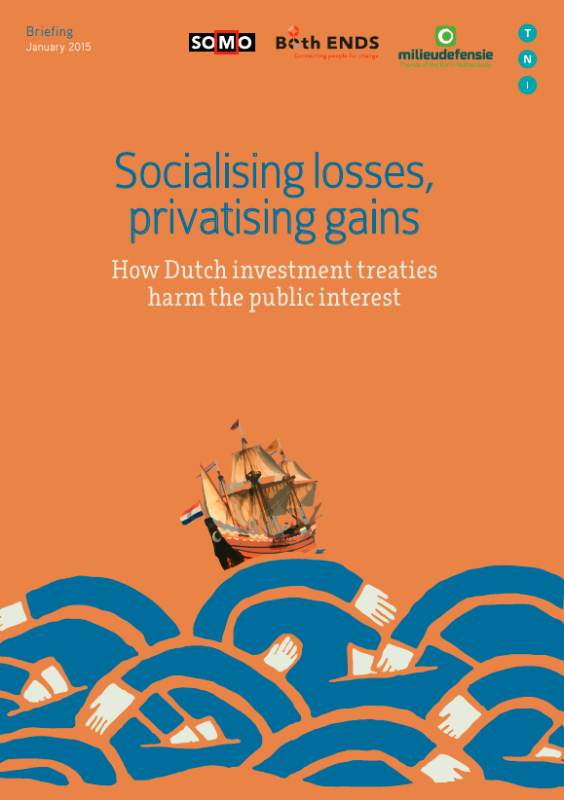 Dutch investment treaties (BITs) are frequently used by foreign companies to sue governments in the North and South for policies that might harm their future profits. 75% of these cases were brought by mailbox companies with no real economic substance in the Netherlands, making use of the vast web of Dutch BITs and the rights and protection given to foreign investors.

Over the past two decades a complex web of more than 3,200 investment agreements has developed globally, mostly in the form of Bilateral Investment Treaties (BITs). These treaties grant investors far-reaching rights, limiting state control over transnational capital and constraining governments’ policymaking space. A key provision in many of the investment agreements is a controversial mechanism that allows corporations to sue governments in private international arbitration tribunals outside the regular national court system. Investors’ claims through ‘investor-state dispute settlements’ (ISDS) have skyrocketed by more than 400% since the early 1990s.

These ISDS lawsuits increasingly challenge public interest environmental and health policies, and include cases (in the global north and south) where corporations use the ISDS framework to challenge a plethora of public policy measures. ISDS lawsuits are sparking an increasingly heated public debate on the necessity of reform of the current framework, especially in the context of negotiations around the EU–US Transatlantic Trade and Investment Partnership (TTIP) and the Canada–EU Comprehensive Trade and Economic Agreement (CETA). The debate centres not least on two aspects of investment agreements – first, that their contribution to their stated aim of attracting foreign capital is at best inconclusive; and second, that their adverse impact on policy space and public budgets cannot be ignored.

The Netherlands takes a central position in the current debate around BITs and international investment agreements (IIAs). More than 10% of all known investment treaty claims make use of Dutch Bilateral Investment Treaties (BITs).The growing controversy surrounding BITs – and in particular the mounting critique of Dutch BITs as being excessively investor-friendly, to the detriment of the policy space of developing countries– has led the Dutch trade department to announce a review of Dutch bilateral investment treaties with developing countries. This paper gives a critical civil society perspective on the clear tension between BITs protections and the democratic right and duty of the state to regulate in the broader public interest.

As mentioned above, IIAs are a particularly pressing problem for developing countries. Given their limited budgetary resources, high pay-outs to investors hit developing countries disproportionately hard. At the same time, their policy frameworks are often limited and actually require more public policy making, a need which IIAs restrict, leaving these countries wide open to claims. Specifically, this paper shows how (the threat of) lawsuits taken to the International Centre for Settlement of Investment Disputes (ICSID) and other fora, using Dutch BITs, have effectively blocked policymaking in the public interest for development in host countries.

This paper also discusses the risks that the extensive Dutch BIT network poses for the Netherlands itself. So far, the Netherlands has never been on the receiving end of an ISDS claim, but changing global patterns of investment increase the likelihood of developed countries being sued before ISDS tribunals. It examines the flaws in the ISDS system and the adverse impacts of the broad set-up of Dutch BITs. It also looks at the shortcomings of recent proposals for reforming the ISDS system that have emanated from the European Commission and have been embraced by the Dutch foreign trade and development minister. The paper concludes with concrete recommendations for a more sustainable and inclusive investment policy.