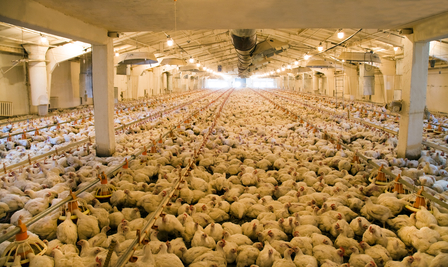 South Africa’s poultry industry says it is on the brink of collapse due to hotly-denied accusations that the European Union is dumping cheap chicken in the country in a dispute over free trade.

Workers, former workers and company managers from the South African poultry sector will march on the EU headquarters in Pretoria on Wednesday (1 February), furious over cheap imports and mounting job losses.

But the EU has accused the industry of using it as a “handy scapegoat” for domestic production problems, and said volumes of EU chicken imported to South Africa were too small to be responsible for the crisis.

RCL Foods, South Africa’s largest poultry producer, last month laid off 1,350 employees – 20% of its workforce – and is selling 15 of its 25 farms.

“This issue has been growing since the EU started to send more and more leg quarters to South Africa at what we consider dumped prices,” RCL Foods managing director Scott Pitman, who will join the march, told AFP.

“Not only have we taken a financial burden over the last five years, but the loss has got so big that we are going to go bankrupt if we don’t cut the size of our business.”

“This is a form of waste disposal,” Kevin Lovell, the boss of the South African Poultry Association (SAPA), told AFP.

South Africa is struggling with slow growth at just 0.4% last year and unemployment is stuck stubbornly high at 27% – posing a major challenge to the ANC government.

On Monday (30 January), ANC secretary-general Gwede Mantashe suggested the government should intervene by buying poultry farms that are closing down and finding new markets for their produce.

In the face of damaging accusations of dumping, the European Union has fought back, saying the South African poultry industry was blaming others for its own failures.

“When people are losing livelihoods, trade deals can be a handy scapegoat,” EU Ambassador Marco Cornaro told reporters on Tuesday.

“It is a distortion… to think that it is the EU trade policy which is the origin, let alone the main source, of the current woes of the SA chicken industry.”

According to EU figures, EU exports account for less than 7% of total South African chicken consumption, and EU imports of “dark meat” account for only 14% of local market consumption.

The EU said it would welcome marchers into their delegation offices on Wednesday to discuss their concerns.

Brazil was the biggest poultry importer to South Africa in the first half of 2016, followed by Netherlands, Britain and Spain.

Trade Minister Rob Davies told Bloomberg News last week the poultry sector was in “distress”, adding “we will not have an industry to raise the competitiveness” if imports continue to flood the market.

On top of tough avian flu restrictions, South Africa has imposed anti-dumping duties on EU importers and, in December, also introduced an extra “safeguard” tariff to try to protect the industry.

The EU is South Africa’s biggest trading partner, and the dispute marks a tricky start to the economic partnership agreement (EPA) between the two sides that came into force last year.