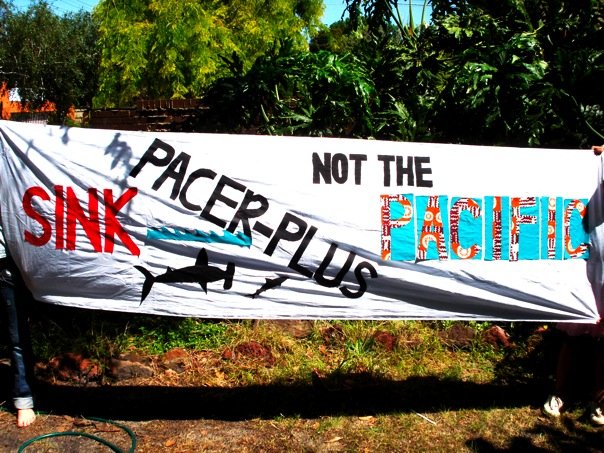 Australia and New Zealand are being accused of fast-tracking the Pacific-wide free trade agreement, PACER-Plus. The Civil Society Organisations (CSOs) want a moratorium on negotiations.

The request for a moratorium was the focus of a CSO statement to Pacific leaders attending the 2010 Forum Leaders’ Meeting in Port Vila, Vanuatu, earlier this month.

It looks like the FICs are being "ignored and ploughed over" by Australia and New Zealand.

CSOs, including churches, trade unions and indigenous rights groups, have not been adequately consulted about the type of development and trade relationship the Pacific should have with Australia and New Zealand, says PANG (Pacific Network on Globalisation).

Pacific forum island countries (FICs) have consistently asked Australia and New Zealand for more time to talk to their people and to research key areas that could impact them.

They want the two powers to consider a "road map" with negotiations beginning in 2013, says PANG campaigner, Adam Wolfenden.

But Australia remained adamant at the foreign trade ministers meeting in Pohnpei, Micronesia, in April this year that PACER-Plus negotiations would continue, says Mr Wolfenden.

CSOs want a priority placed on development and development aid. But PACER-plus negotiations have increasingly been focused on trade rules and the opening up of markets.

Most people do not fully understand how the PACER-Plus negotiations will affect them. Traditional landowners have not been consulted despite land being inseparable from the life and economies of the islands.

As the most important trade agreement that the Pacific nations will undertake this decade, PACER-plus has the potential to profoundly change a whole way of life in the Pacific and its economic structure.

It looks like the FICs are being "ignored and ploughed over" by Australia and New Zealand, says Mr Wolfenden.

There is concern that import taxes, which account for up to 19 percent of government revenue, could be affected by an agreement, and that this in turn could affect the continuity of essential services.

Pacific governments’ ability to support local industries would also be affected by restrictions imposed by an agreement which would see a spiralling of imports entering the islands from Australia and New Zealand, said Mr Wolfenden.

Health, education, water and electricity are some of the key services that CSOs want taken out of PACER-Plus negotiations.

“Essential services ... should be guaranteed, not left to the whims of the market,” believes Mr Wolfenden.

Loss of affordable health care and basic services could be the price paid if island governments lose control over these areas.

Dr Chris Noonan, the independent Chief Trade Adviser, says it is hard for island nations to "stick together" in solidarity as their economies and relationships with the two main powers are not the same.

Mr Noonan’s role is to assist FICs prepare for PACER-Plus discussions and negotiations.

“It is relatively easy for Australia and New Zealand to give economic incentive to change the minds of certain countries on regional issues,” he told Pacific Scoop.

Australia is using aid as a leverage to further its own interests while potentially putting the Pacific island economies at risk.

“Furthermore, while trade commitments would be binding and enforceable, promises of increased aid are not,” stated Mr Lee in a press release.

CSOs want Australia and New Zealand to look into an alternative trade agreement.

“What is being offered appears to be nothing more than a standard free trade agreement, not something that is addressing the specific needs and circumstances of the Pacific Islands,” says Mr Wolfenden.

PACER-Plus (Pacific Agreement on Closer Economic Relations) is a forum for discussions on trade between Pacific Island nations and Australia and New Zealand.