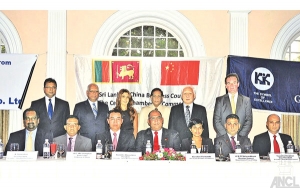 Sri Lankan ambassador Karunasena Kodituwakku also confirmed to journalists in the Chinese capital city that his country’s prime minister, Ranil Wickremesinghe, will visit Beijing in May to continue high-level FTA discussions, according to comments reported by Reuters. The two sides have held four negotiating rounds to date.

When the trade talks launched nearly three years ago, China’s Ministry of Commerce (MOFCOM) affirmed that the future accord aimed to “contribute to further deepening bilateral economic and trade relations, and accord with the benefits of the two countries.”

According to a joint feasibility study issued in 2014, the two sides aim to address areas such as tariffs and non-tariff measures, rules of origin, customs procedures, and sanitary and phytosanitary measures and technical barriers to trade. They will also cover various aspects of services trade, along with addressing issues related to investment and economic and technological cooperation, including e-commerce and small and medium-sized enterprises.

The report also suggested that the deal could be a boon both in terms of “economic development and social welfare” for the two trading partners. Bilateral trade has been on the rise between the two Asian economies, hitting US$4.56 billion in 2015, increasing 12.9 percent year on year.

Separately, China has also been working with Sri Lanka on the development of the Hambantota port, as a part of China’s "One Belt, One Road" initiative, an ambitious regional connectivity project which aims to develop land and maritime corridors across the region to Europe and beyond.

Supporters of the deal suggest that the future FTA would help support the continued efforts to improve regional integration. China has actively pursued trade deals within the Asia-Pacific and further afield, including in its participation with the 16-country Regional Comprehensive Economic Partnership (RCEP). The RCEP is being negotiated between the 10 members of the Association of Southeast Asian Nations (ASEAN) along with their six FTA partners: Australia, China, India, Japan, New Zealand, and South Korea.

For its part, Sri Lanka is currently party to five trade deals, some regional and others bilateral, with three other under negotiation, including the one with China, according to a list compiled by the Asian Development Bank. Other countries, including India and New Zealand, are also reportedly considering trade deals with the South Asian country.