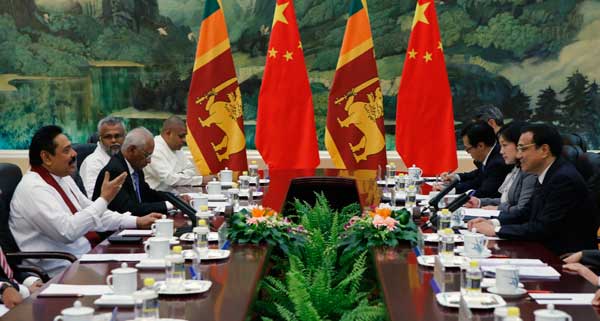 Sri Lanka is closing in on a Free Trade Agreement (FTA) with China after ending the sixth round of negotiations on trade in services with senior officials hopeful that the deal could be concluded soon.

According to agreed minutes of trade in services working group meeting held in Beijing, China recently, both sides further exchanged ways to enhance cooperation and investment on the construction and engineering sectors, which is of win-win for the two countries.

Sri Lanka has agreed to the suggestion on establishing the Construction and Engineering Services Cooperation Group (CESCG) considering it as an encouraging progress for trade in services.

The two sides will consult domestically in arriving at a consensus on international completion bidding (ICB) projects or bilateral negotiated projects at the next round of negotiations.

China welcomed the improved offer from General Agreement on Trade in Services (GATS) commitment of Sri Lanka on banking sectors.

The Sri Lanka side extended an invitation to the China Banking Regulatory Commission and Bank of China representatives to visit the island for discussions on establishing a branch in the country.

An agreement was reached on articles related to Most –Favoured Nation Treatment (MFN) and Ratchet Mechanism (Standstill clause) which is considered as another progress in the sixth round of negotiations.

Ratchet clauses in a trade agreement means a country cannot re-introduce a particular trade barrier that it had previously and unilaterally removed in an area where it had made commit commitment.

Several economic experts told Business Times that this clause would not be favourable for Sri Lanka as it has to list all the barriers at the moment of taking commitments and afterwards cannot introduce and new barriers.