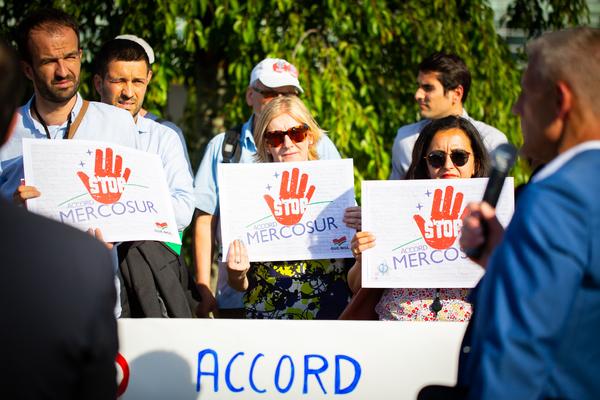 Germany, the world export champion, has always been the most ardent advocate of the so-called free trade agreements. During its EU Council Presidency, which begins today, the Merkel government stated they would throw their weight behind two transatlantic trade agreements: TTIP light, as well as the “Association Agreement” with the South American trade bloc Mercosur (Southern Common Market), which was bombastically announced one year ago.

The advent of coronavirus, however, has led to a shift in priorities: in light of the obvious systemic crisis, the top priority for both Angela Merkel and Emmanuel Macron is now saving the neoliberal EU. Nevertheless, it is likely that they will want to push on with their trade agenda quietly and unhindered.

Since 2006, the EU Commission—under the slogan of a “Global Europe”—has been attempting to make “its” companies more competitive and codify the role of the Global South as a supplier of raw materials and purchaser of EU agricultural surpluses. A key component of this strategy is the “free trade” agreements. However, like ATTAC pioneer Susan George, we prefer to refer to these agreements as vampire treaties: it’s bad for them if they come to light, as they rarely stand up to democratic debate.

The EU-Mercosur agreement is a textbook example of this. The project was launched in Rio de Janeiro in 1999, when neoliberalism in South America had already passed its zenith. But then the pink tide arrived, with Luiz Inácio Lula da Silva in Brazil, Néstor Kirchner in Argentina, and Hugo Chávez in Venezuela. In 2005, in the Argentinian city of Mar del Plata, cheered on by social movements, the three left-wing politicians succeeded in putting an end to another neo-imperial project in the presence of George W. Bush: the Free Trade Area of the Americas (FTAA), which would have been a playground for transnational corporations from Alaska to Tierra del Fuego.

The newfound self-confidence of the progressive governments in Brazil, Argentina, Uruguay, and Paraguay made an inequitable deal with the European Union unthinkable, and the negotiations dragged on for a long time. But on the other hand, the EU was never prepared—for good reason—to unconditionally open its doors to beef and genetically modified soy from the Mercosur region. The “strategic partnership” between Germany and Brazil, which was announced in 2008, changed little in all of this.

The tide turned in 2016 with the cold coup d’état against Lula’s successor Dilma Rousseff, the shocking conviction and imprisonment of Lula, and the subsequent victory of Jair Bolsonaro. With the inauguration of the right-wing extremist at the beginning of 2019—neoliberal businessman Mauricio Macri was in power in Argentina—negotiations were suddenly kicked into gear. After six months, a draft had been drawn up, of which to this day only a general outline has been made public, let alone signed or even ratified. Bolsonaro, Macri, Macron, and Merkel nonetheless celebrated the political agreement at the G20 summit in Osaka on 28 June 2019, which also served as a symbol of resistance against the kind of right-wing protectionism championed by Trump.

Even then it was clear that the deal would further promote the recolonization of South America. However, this would be neither in the interest of the communities living on both sides of the Atlantic nor in the interest of nature, as studies conducted by the Greens in the European Parliament, Misereor, and Greenpeace demonstrate. If the agreement were actually signed and implemented, it would be a triumph for the multinationals and their profit logic. This Monday, it was announced that the tricky phase of “legal scrubbing” was finished.

The open veins of Latin America

Since 1492, Latin America has predominantly played the role of supplying mineral and agricultural resources to other parts of the world. Following attempts to emancipate the region from this role in the early 2000s, Argentina, Brazil, Paraguay, and Uruguay now look to be permanently locked into it. In the best case, agribusiness and the import sector in these countries would profit from a gradual lowering of customs barriers. Workers, small farmers, and indigenous people would pay for the sanctioning of slaveholder capitalism with the further erosion of their rights and livelihoods.

The planned liberalization of trade would increase both job cuts and downward pressure on wages, and, according to the EU Commission, European companies would stand to save 4 billion euros per year in taxes. New business opportunities in the telecommunications and IT sectors are also expected. In addition to an ecologically preposterous expansion of international trade, EU negotiators are insisting on stricter patent protection, which would erode the supply of affordable generic medicines to South Americans. Negotiators are also calling for EU companies to be granted an equal say in government purchases in Mercosur, which are often used to strengthen local European companies. However, there are still no plans to implement sanctions for shared responsibility for environmental crimes or human rights violations.

When it comes to the neoliberal governments of Brazil, Paraguay, and Uruguay, the EU’s job is easy, even if they are being courted by the German-Brazilian Chamber of Commerce and Industry: it is disgraceful that Bolsonaro—who is responsible for the destruction of tracts of rainforest and displays contempt for his fellow humans—and his military are touted as partners of a democratic Europe. The situation looks different when one travels further south. Argentina’s prudent president Alberto Fernández, a social democrat, has been in power since December 2019. Like his friend Lula, he is calling for relations to be conducted on an equal footing and has consequently been maligned by the neoliberal press as Mercosur’s gravedigger.

We have already witnessed dramatic levels of destruction not only of the Amazon region, but also of the biodiverse ecosystems of Cerrado and Gran Chaco, which are being forced to give way to monocultures that are hostile to life. And yet Bayer-Monsanto plans to sell even more genetically modified grain and agricultural chemicals, and Tönnies & Co. plans to continue importing genetically modified soy. In the long run, BMW, Daimler, and VW, whose Brazilian management worked together with the military dictatorship’s torturers almost 40 years ago, would use car parts manufactured in China, rather than in Argentina.

The EU-Mercosur agreement is a neocolonial, inhumane project that is harmful to the environment; indeed it is an anachronism—and that is why it will fail.

Our debate with English subtitles from Tony Phillips: What´s in it for Argentina?