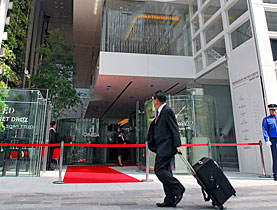 A passerby gazes at a large Swatch store, the Nicolas G. Hayek Center, in a posh Tokyo district (Keystone)

Swiss companies are assessing how they could take advantage of a Free Trade Agreement (FTA) with Japan that comes into effect on September 1.

It has been hailed as Switzerland’s most important economic pact since the 1972 FTA with the European Community (EC). It is the first such deal that Japan has signed with a country outside the Asia-Pacific region.

The agreement aims to slash tariffs on a range of goods, reduce red tape for companies, enhance services and set up a model for e-commerce.

Switzerland already enjoys a booming trade partnership with Japan, the world’s second-largest economy. Swiss exports grew 4.8 per cent last year, totaling more than SFr7 billion ($6.56 billion), while Japanese goods to the tune of SFr4.1 billion made the return trip (up 18.2 per cent).

Martin Herb, managing director of the Swiss-Japanese Chamber of Commerce, said that a lot of Swiss companies have been in contact since the FTA was signed in February.

"The speed and timing of this agreement is significant. Companies have to be more active during times of recession and expand into new markets," he told swissinfo.ch.

"The FTA has drawn a lot of publicity and a number of companies are looking at Japan for the first time. We could see more small and medium-sized enterprises doing business in Japan as a result."

However, he added that it was too early to gauge precisely how much impact the agreement would have on Swiss firms or exports. Herb believes the advantages would show a steady, long-term positive effect for both countries as opposed to a sudden explosion of trade.

Switzerland has calculated that the reduction of tariffs would deprive customs of SFr15.7 million per year, but that would be more than offset by an estimated SFr100 million savings windfall for Swiss exporters to Japan.

Some of the more obvious winners could be Swiss industrial companies, the cheese, meat and chocolate industries.

From the Japanese side, electronic goods and car manufacturers, particularly environmentally friendly models, stand to gain. There is, in addition, an improved market for selected agricultural products such as Bonsai trees and Sake rice wine.

The FTA also has a symbolic significance for Japan as the first such pact signed with a country outside its own geographical region.

"[It] is epoch-making for both countries from the standpoints that Switzerland is the gateway to Europe and that Japan is the gateway to Asia," Michiaki Watanabe, director general of the Swiss branch of the Japanese External Trade Organisation (Jetro), told swissinfo.ch.

"Japan’s business community will be watching closely, as this pact is something of a model case for future economic partnerships with developed countries."

Japan is exploring the viability of trade agreements with larger economies, such as the European Union, and the Swiss deal could prove a useful testing ground. The dearth of direct competition between Swiss and Japanese firms was another reason that the deal was concluded so quickly.

One potential hiccup to the immediate benefits of the FTA is the parlous state of the global economy, with Japanese firms appearing to have been hit harder than their Swiss counterparts. Japanese exports to Switzerland sank 25 per cent in the first three months of 2009 while Swiss exports to Japan saw a 13.7 per cent increase.

But the latest economic figures show Japan’s gross domestic product (GDP) grew 0.9 per cent in the second quarter, prompting hopes than recovery is on the way.