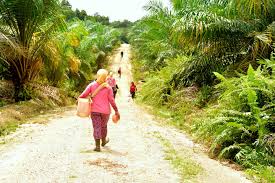 Activists in Switzerland are calling for a ‘Stop Palm Oil’ referendum opposing the Swiss free trade agreement (FTA) with Indonesia. They submitted thousands of signed petitions to the Federal Chancellery in Bern on Monday.

The movement campaigning to exclude palm oil from the FTA – signed in December last year – managed to collect 59,200 signatures, which have yet to be verified. Under Switzerland’s direct democracy system, if a group opposed to a new law manages to collect at least 50,000 signatures within 100 days of the official publication of the proposed legislation, it is put to a nationwide vote.

The FTA was signed on December 19 between Indonesia and members of the European Free Trade Area, which includes Switzerland, Norway, Iceland and Lichtenstein. It provides duty-free access for a range of traded products, including guaranteed tariff reductions of up to 40% on Indonesian palm oil.

The referendum against the FTA was launched by the farmers’ union Uniterre and winegrower Willy Cretegny. The text received support from nearly 50 organisations.

According to the referendum committee, Indonesia is still not willing to implement environmental and social standards to prevent the destruction of tropical forests. The backers are against proposed laws and ordinances for new concessions for mining, infrastructure projects, paper and forestry. Referendum supporters insist that this will have devastating consequences for the climate and the environment, as well as for small farmers and indigenous peoples.

The president of the Young Socialists, Ronja Jansen, called the FTA "a contract of the powerful". She said that it would not bring significant benefits to the local economy and that Switzerland should instead work to achieve genuinely fair and sustainable trade.

Willy Cretegny, an organic winegrower and initiator of the referendum, called on the Swiss people to produce and consume differently: "We have to respect our environment as a whole, i.e. nature, resources, the landscape, human rights, the social and economic fabric”.