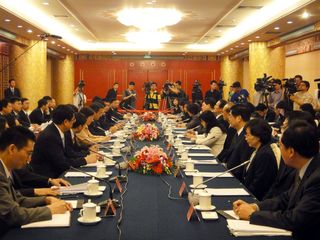 Talk of the day — New model for cross-strait negotiations

A new model patterned after the Taiwan-U.S. Trade and Investment Framework Agreement (TIFA) will be introduced in negotiations across the Taiwan Strait, Mainland Affairs Council Chairwoman Lai Shin-yuan confirmed in an interview Sunday.

Meanwhile, major progress was made in Sunday’s working-level ECFA talks in Beijing, with basic consensus reached on the text of the agreement and its five appendices.

On the contentious "early harvest" program that forms the backbone of the agreement, China agreed to offer tariff waivers or easier market access terms for 500 Taiwanese products and services, whereas Taiwan promised to allow similar privileges for 200-plus Chinese goods and services.

The following are excerpts from local media coverage of the issue:

United Daily News: According to Lai, the new commission to be assembled after the ECFA signing will be a cross-strait version of the TIFA-style engagement between Taiwan and the United States that was formed in the absence of official ties.

The commission will comprise representatives from both sides, and its main tasks will be consultation, supervision and evaluation of ECFA-related affairs, Lai said.

"The commission will be responsible for negotiating ECFA-related issues, overseeing and evaluating ECFA enforcement, resolving disputes about the definition of ECFA clauses and dealing with relevant relief measures," Lai said.

If necessary, the commission will be able to appoint special task forces to address specific issues related to the agreement, Lai said. It will meet once every six months but will have the option of holding provisional meetings at any time with the consent of both sides, she said.

The establishment of the new commission will allow for refinement of the content of the ECFA and help to realize its goals progressively, Lai added. (June 14, 2010).

Economic Daily News: In Sunday’s ECFA talks, Taiwan failed to get items such as automobiles, key petrochemical materials, or machine tools on the early harvest list of goods that would qualify for tariff exemptions or reductions under the ECFA.

This is why the two sides did not unveil the detailed "early harvest" list at the end of the meeting.

While the number of Taiwan products on the early harvest list was increased from 300 to 500, the Chinese side also added another 100-plus items to its list of 100 through hard-nosed negotiations.

The China products that will qualify for concessionary tariffs upon entry to Taiwan are mostly textiles, petrochemicals and machinery items.

In the area of service trade, China agreed to offer better terms to Taiwanese banks setting up branches or establishing footholds in the Chinese market.

Negotiators from both sides agreed Sunday that a fourth round of formal ECFA talks may take place simultaneously with the preparatory talks for the fifth Chiang-Chen meeting at which the ECFA will be formally signed.

They also reached a tacit agreement that the ECFA should be concluded by the end of June or in early July so that it can take effect at the beginning of next year.

The Chiang-Chen meeting refers to engagements between top cross-strait negotiators — Straits Exchange Foundation Chairman Chiang Pin-kung and his Chinese counterpart, Chen Yunlin, president of the Association for Relations Across the Taiwan Straits. (June 14, 2010).

Liberty Times: After the completion of the working-level ECFA negotiations, opponents of the agreement said Sunday they will launch a decade-long campaign against the pact as they are worried that it would "lock Taiwan into China’s embrace, " making Taiwan more and more dependent on the Chinese market.

In the first step of their long-term campaign, the opposition Democratic Progressive Party, the Taiwan Solidarity Union and other pro-independence groups said they will step up preparations for a massive street protest on June 26.