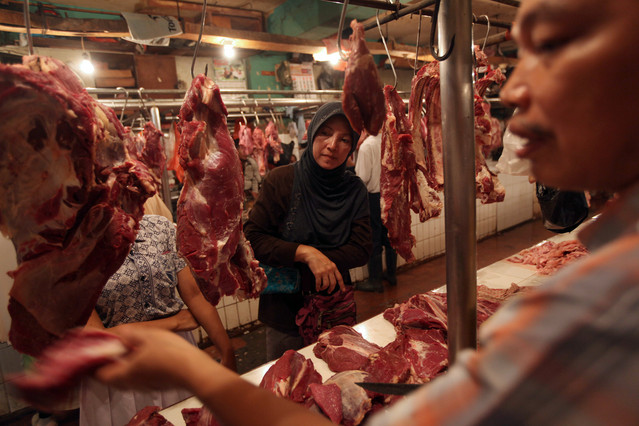 Domestic politics, largely driven by the Indonesian meat industry fearing competition from Australian and New Zealand beef exporters, are believed to have been behind the delays.

On Jan. 10, the long-awaited Free Trade Agreement between Indonesia, Australia and New Zealand comes into effect. This FTA is hardly racing ahead of the pack.

The original documents were signed in February 2009 as part of an overall agreement embracing the 10-member Association of Southeast Asian Nations (ASEAN). Changes were expected to come into force on Jan. 1, 2010.

However, 18 month passed before Indonesia ratified the agreement — the last cab off the rank. Even then the engine may have been running but the gears weren’t engaged.

Last July, the director general for international trade cooperation Gusmardi Bustami said the FTA’s paperwork could hopefully be completed and the deal be finalized that year.

His optimism was misplaced, but in the labyrinthine world of trade diplomacy getting real results would test the most skilled and patient. If trade negotiators were developing cellular phones we’d still be using housebricks.

Fortunately for New Zealand, its trade minister had an insider’s understanding of Indonesia’s arcane bureaucracy. Thanks to Tim Groser, a diplomat heavily involved in the World Trade Organization and who in the mid-1990s was New Zealand’s ambassador in Jakarta and speaks Indonesian.

Domestic politics, largely driven by the meat industry fearing competition from Australian and New Zealand beef exporters, are believed to have been behind the delays.

The Indonesian milk industry was also reported to be opposing the FTA. However, the rising demand in the archipelago for dairy products seems to have placated local producers who are hard pressed to quench the thirst.

Will Indonesians now be licking ice cream made with milk from cows, not coconuts, and grilling prime Angus T-bones fresh from the lush pastures of the South Pacific ? Some, maybe, but even with tariffs down costly steaks will still be off the menu for the majority. They’ll continue to get their protein from locally produced chicken, fish and tempeh.

And will Kiwis be enjoying barbecues lounging on outdoor furniture made in Indonesia ? That’s already happening, though business has been constrained by buyers insisting that only plantation timber is used.

There’ll be no snappy changes with the FTA. About 11 percent of New Zealand goods currently have duty-free access to Indonesia. That figure will slowly rise to more than 90 percent by 2015.

Nor will improvements be dramatic. Most tariffs on New Zealand imports are around 5 percent, though “prepared foods” are burdened with a whopping 25 percent — which is why your favorite processed cheddar might be handy on the supermarket shelf but still out of reach.

Will prices fall ? Only if traders pass on the cuts. The more unscrupulous will argue higher costs absorb the savings.

Although politicians are trumpeting the agreement as a major advance (Groser described it as “a high-quality, regional trade agreement that provides benefits to all of its parties”) Australasia will be the prime beneficiary getting easier access to ASEAN markets — around 625 million people.

Business between the nations currently favors sellers. Indonesia is New Zealand’s ninth largest export market and not surprisingly the biggest in Southeast Asia. Kiwi meat and milk products — worth NZ$865 million (US$670 million) go to Indonesia. The ships return with goods like petroleum and paper products worth NZ$628 million.

Australia’s trade in the region, boosted by mineral sales, is already worth about US$100 billion.

Kiwis shopping for archipelagic products need ample time and comfortable shoes, preferably made in Indonesia. A major retailer is importing, but shoes and sandals are seldom promoted by the country of origin. (The exception is Italy.)

Instead they are mixed with footwear from Malaysia, Vietnam and China, the major suppliers of consumer products.

Unlike Chinese imports on sale in Indonesia, the goods found in stores from Darwin to Invercargill are generally well made and guaranteed for a year or more.

Tough consumer protection laws, backed by government departments and the courts, mean customers can return duds and get a rapid refund or smiling exchange.

In Indonesia, buyers usually insist boxes are unpacked and devices tested before their eyes prior to purchase. Guarantees, if offered, last only weeks. Retailers in Australia and New Zealand demand their overseas suppliers maintain strict quality control.

That issue needs to be addressed by Indonesian companies seeking to sell in markets where consumers are kings and queens — and knaves rapidly routed. Slapping thick black varnish on cracked green-timber furniture will give Indonesia the shoddy goods image once held by China.

The Indonesian Embassy in New Zealand is planning a trade and culture fair later this year to boost business. In the past it has backed displays of batik, a material almost universally associated with Indonesia and widely admired.

However follow-up merchandising hasn’t been effective, raising the question : Are Indonesian exporters serious about building markets in the south ?

The problem is that many manufacturers seem happy supplying the domestic market, expanding in number and wallet size, particularly the cashed-up middle classes.

New Zealand has only 4.4 million people, about the number living in Surabaya, East Java. Australia’s 22 million is much less than Greater Jakarta’s 28 million.

By contrast, Australians have to export or perish. That’s made us aggressive sellers and innovative marketers.

Tariffs haven’t been the only problem. Although Indonesia is New Zealand’s nearest Asian neighbor, it’s a long haul getting goods to the Republic. In the way is the big southern continent, its major competitor.

Glaciers have melted and species become extinct since free trade talks began, but the agreement removes barriers that for too long have been used as excuses by tardy traders. This should be good news for the public.

Governments have unlocked the gates. Now it’s up to business to push them open.

The writer is a journalist in Malang, East Java.