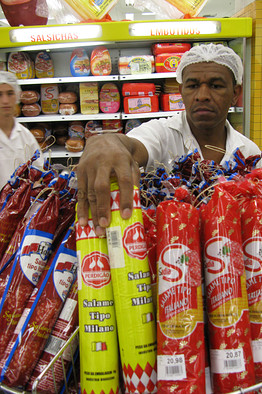 Brazil is today an agribusiness giant

Just days before the talks, suspended in 2004, get back underway in Madrid, the ten countries took the unusual step of issuing a statement to the entire EU council slamming the decision.

The joint statement, which will be submitted to European farm ministers on Monday, is proposed by Austria, Finland, France, Greece, Hungary, Ireland, Luxembourg and Poland.

Romania and Cyprus also now associate themselves with the statement, a European diplomat said.

The joint statement, seen by AFP, speaks of "regret" at the European Commission’s decision to resume the talks, while recognising that "in formal terms" the EU’s executive had the right to do so.

"We regret that it has been taken without prior political debate with the Council, and without a debate on possible economic impact of an agreement with Mercosur on the EU economy," the statement continues.

While the farm ministers’ meeting is underway Monday, the Spanish EU presidency, which supports the resumption of the Mercosur talks, will formally reopen them in Madrid with the leaders of Argentina, Brazil, Paraguay and Uruguay.

The text to be presented by the protesting national delegations on Monday under ’any other business’ warns that "the strategic agricultural interests of the European Union are clearly at stake."

"The ambitions and interests of both parties do not appear to allow progress to be made in these negotiations, which were begun in 1999, unless further concessions are made on agriculture by Europe, and this would be unacceptable," they argue.

The text states that concessions offered in July "constitute an absolute limit".

"At that time, the commission recognised that these proposals would result in major losses for the EU agriculture sector," it continues.

Brazilian Foreign Minister Celso Amorim said in February that the EU and Mercosur could strike a free trade deal at the next EU-Latin America and Caribbean summit scheduled on May 18 in Madrid.