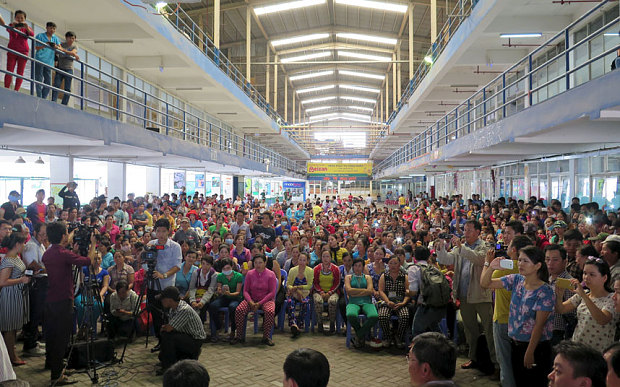 Vietnam has tentatively agreed with the United States on a fully enforceable implementation plan to bring its labor regime into compliance with the Trans-Pacific Partnership (TPP) labor chapter that would explicitly condition the reduction of some U.S. tariffs on Vietnam’s granting full freedom of association to independent unions, according to informed sources.

Specifically, the “consistency plan” that has been informally agreed would require Vietnam to take a wide range of steps to improve freedom of association upon entry into force, but give it an additional five years to implement one crucial commitment in this area, sources said.

This commitment, known as “cross-affiliation,” is to allow independent local unions at specific factories in the same sector to affiliate with each other, as well as to form a broader national federation with unions from other sectors. Once the five-year transition period elapses, there would be an additional two-year period under which the U.S. would assess whether Vietnam has complied with the obligation on cross-affiliation.

If the U.S. any time during that two-year period determines that Vietnam has not implemented this obligation, the U.S. could provide notification to Vietnam, enter into consultations, and then unilaterally suspend the tariff phaseouts that have not yet taken place by that time.

This would presumably apply to all tariff lines and would not be limited to certain types of products, sources said. The Vietnamese products likely to face tariff phaseouts longer than seven years are some types of apparel and footwear, canned tuna, brooms, glass and china, according to one informed source. Any U.S. tariffs that had already fully been phased out prior to the U.S. determination would not be affected.

Vietnam would then have two options. One is that it agrees with the U.S. that it has not implemented the cross-affiliation obligation, in which case the tariff phaseouts would remain suspended. The other is that Vietnam believes it has indeed implemented the obligation, in which case it could launch a dispute settlement proceeding against the United States under the normal TPP dispute settlement process.

All of the commitments laid out in the consistency plan would also be subject to the normal TPP dispute settlement process, including those that Vietnam must implement prior to entry into force of the agreement.

Among these is the obligation for Vietnam to allow workers to form unions that would not be required to affiliate with the Vietnam General Confederation of Labor (VGCL) linked to the ruling Communist Party. This would require a change to Vietnamese law to allow such “independent” unions to register with the labor ministry.

The consistency plan is somewhat of a mixed bag for supporters of worker rights. While it falls short of their demand that Vietnam be required to comply with all of the plan’s steps before the U.S. Congress votes on a TPP implementing bill, it also partially meets their requirement that Vietnam’s commercial benefits under the agreement be explicitly linked to its compliance with labor obligations.

The plan is likely to please congressional Democrats, but anger their Republican counterparts. Some Republicans are already arguing that the TPP obligations are unbalanced because they include very detailed commitments on labor rights but are likely to include much vaguer obligations on intellectual property (IP), including for biologic drugs.

They are also likely to charge that linking Vietnam’s tariff phaseouts to its compliance with its labor obligations is unprecedented. But U.S. officials argue that there is a precedent in a side deal the U.S. agreed with Costa Rica in the context of that country’s implementation of certain provisions of the Central American Free Trade Agreement (CAFTA).

Under that exchange of letters, the U.S. allowed CAFTA to enter into force for Costa Rica even though it had not passed all IP-related laws necessary to uphold its FTA obligations, while retaining the right to impose trade sanctions in the event of non-compliance.

When Costa Rica exceeded the agreed-upon time period for compliance, the U.S. ultimately blocked sugar imports from Costa Rica until it made the necessary legislative changes on IP.

Meanwhile, U.S. apparel importers seem willing to accept the notion of conditioning U.S. tariff phaseouts on Vietnam’s implementation of the cross-affiliation obligation, even though the most commercially significant apparel items will have phaseouts between 10 and 12 years.

They appear willing to accept this condition in part because they believe a U.S. determination on this obligation within five to seven years of entry into force gives them enough prior notice to decide whether they should begin investing in textile production in Vietnam in order to prepare to take advantage of tariff elimination.

In other words, if the U.S. decided to suspend the tariff reductions due to Vietnam’s noncompliance, a company would still have sufficient time to decide not to invest in textile production in the country. The general yarn-forward rule of origin in TPP means that Vietnamese apparel products can only qualify for duty preferences when they enter the U.S. market if they are made from yarn and fabric produced in the region, although there are some exceptions.

If Vietnam failed to convince a TPP dispute settlement panel that it had implemented the cross-affiliation obligation, the tariff phaseouts would remain suspended. But if Vietnam wins, then the original tariff phaseout schedule would be restored, without compensating importers for the higher duties they paid in the intervening period, sources said.