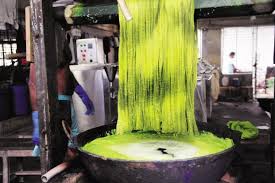 Delegation of FICCI Textiles Committee met Smriti Zubin Irani, Minister for Textiles and Women and Child Development recently and impressed upon her to launch a special mission for synthetic fibre and textiles value chain to make Indian industry competitive in the global trade which is predominantly done in the man-made fibre (MMF)-based items.

Global textile markets are swiftly shifting from exports of cotton yarn to manmade fibres. Hence, India must take urgent steps to keep pace with the global markets by increasing production and exports of MMF based products.

Government needs to announce a MMF Textile Mission for giving thrust to development of Synthetic and Specialty fibres in India by making the value chain competitive and providing raw materials at competitive prices, said FICCI.

Currently, due to different GST rates in the textiles value chain refund accumulates due to inversion. Collapsing all these rates into a single rate of 12% does not build up input tax credit, does not lead to refund of input tax credit which would imply less paperwork and less applications for the industry, noted FICCI.

Imported garments have got 12-15% advantage vis-a-vis domestic garments in the post GST period. FICCI suggested that under the SAFTA agreement only those goods should be exempted from custom duty, whose raw material is also manufactured by SAFTA countries.

Yarn and fabric forward rules of origin are required under SAFTA to ensure any duty free garment import is made up of yarn or fabric from within the SAFTA countries only.

To increase the employment of women workers in garment sector, FICCI suggested to increase the deduction under IT Act Section 80JJAA for women work force from present 30% to 60% per annum threshold.

The minimum period of employment is relaxed to 150 days in the case of apparel industry). This would encourage employers to employ women work force which is now constrained by social and statutory conditions

FICCI also requested the Minister to come out with a Worker Housing scheme for apparel sector in the cities. The need for such a scheme arise from the growing difficulties faced by women garment workers due to lack of safe and conveniently located accommodation in cities.

Also, to arrest and increase the declining female workforce ratio in the country, it is important to have such a scheme for the women workers in and around cities, noted FICCI.