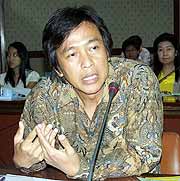 Leading Aids activist Nimit Thian-udom says it is too early to breathe a sigh of relief.

It seems like welcome news for civil society groups which have been keeping a close watch on Thai-EU free trade agreement negotiations.

Thai trade representative Olarn Chaiprawat, who is chief negotiator, has given them a confirmation that the provisions of the World Trade Organisation’s Trade-Related Aspects of Intellectual Property Rights (Trips) agreement, also known as "Trips-plus", and drug issues will not be included in the Thai-EU FTA negotiations.

Mr Olarn’s confirmation to civil society groups came ahead of the second round of negotiations, which is to begin today in the northern provincial capital of Chiang Mai.

While some activists have hailed Mr Olarn for his stance, which seems to signify that he shares the same perspective as those in civil society, leading Aids activist Nimit Thian-udom said it was too early to breathe a sigh of relief.

"Mr Olarn may have good intentions, yet I can’t afford to be too optimistic," he said.

"In fact, we have learned that the EU demands may even go beyond our concerns over Trips-plus," said the activist, referring to the provisions that include the extension of terms of a patent longer than 20 years, as well as provisions imposing limitations on the use of compulsory licences (CL) which eventually allow cheaper, generic versions of drugs to be manufactured.

The activist’s concern is valid given that the EU is still pushing for those provisions in its negotiations with other countries in the region, including Indonesia, Malaysia and Singapore.

Of particular concern is a provision that is known as "data exclusivity", which refers to exclusive rights granted over the pharmaceutical test data submitted by companies to drug regulatory authorities for market authorisation.

As a result, data concerning a drug’s safety and efficacy is kept confidential for a specific period of time. If that provision applies, it means generic manufacturers cannot have access to the data for a drug even if it is not patented.

Another concern is over the arbitration process which allows EU investors to sue the Thai government over public policies.

While it appears that the Thai negotiators have been more open to the people’s sector during previous consultations, the activist said more can be done to improve public understanding.

"The point is, we have never seen the documents in full," Mr Nimit said. "All papers for use in the negotiations are classified documents so they only give us summaries of issues that we are concerned about. In practice, we don’t really know what’s going on and by the time we know what’s happened, it may be too late."

Mr Nimit said the government should find ways to better inform the public of the FTA negotiations and ensure that it takes the concerns of the people’s sector seriously, not just present the positive side of the FTA and withhold the negative impacts of the agreement.

"It appears that more information [on what is on the negotiation table] comes from the EU than from our government," he noted. It is reported that the EU negotiators agreed to meet with representatives of the people’s sector during the fives days of negotiation in Chiang Mai to listen to their concerns.

Jacques-chai Chomthongdi of FTA Watch reiterated that free trade should be limited in the areas that affect public health and welfare, including access to drugs, as well as so-called natural resources-based investment which may allow transnational agro-businesses to take control of the country’s natural resources and the farm sector, making farmers more vulnerable to seed monopoly by agro giants.

Last week, the Assembly of Tambon Administrations issued a statement voicing opposition to Trips-plus provisions in the use of natural resources and the arbitration process in disputes in the areas of healthcare and environmental protection. Civil society groups also plan to hold a two-day campaign in Chiang Mai on Wednesday and Thursday to make the public more aware of the problems that come with the Thai-EU FTA.

About the author columnist Writer :