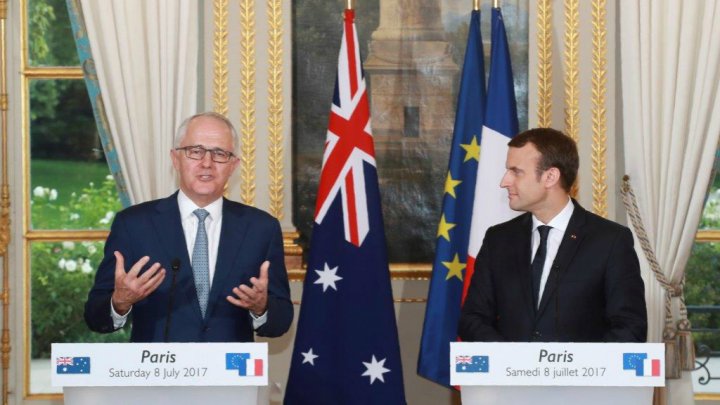 The EU pursues $15b free trade talks with Australia, but there’s a catch

The European Union is preparing to launch trade talks with Australia in June to strike a deal that would add $15 billion to both economies, including a push for more rights to geographic names such as parmesan cheese and Parma ham that are essential to European food brands

The EU’s lead trade negotiator, Cecilia Malmstrom, said she hoped to visit Australia within weeks to start talks on a free trade agreement, which are likely to be authorised to proceed on May 20.

But she warned that European farmers will expect Australian producers to give ground on the divisive issue of geographic identifiers, which could stop Australian food companies using labels such as parmesan for cheese and Parma for ham.

Ms Malmstrom told Fairfax Media the agreement would serve a “strategic” purpose by creating a “circle” of allies to remove barriers at a time when US President Donald Trump has imposed steel tariffs that could trigger a trade war.

“The most important thing right now, with growing protectionism in the world and uncertainties coming from traditional allies, is to expand this circle of friends,” the EU trade commissioner said in an exclusive interview.

Asked if Australia should back any challenge to the US at the World Trade Organisation, Ms Malmstrom said the EU had been talking to countries including Australia, Canada and Mexico about the dispute.

“I think it would be good if as many countries as possible joined, but I think we need to see how things develop in the week to come,” she said.

Ms Malmstrom was speaking soon after she met Prime Minister Malcolm Turnbull in Brussels on Tuesday alongside European Commission President Jean-Claude Juncker, where they discussed trade and security over lunch.

The meeting came one day after German Chancellor Angela Merkel issued vocal support for the EU-Australia Free Trade Agreement, saying Germany was in favour of meeting Australia’s wish for a deal.

This is a crucial moment in global trade relations as Australia, Canada, China, the EU and others wait for a final decision from the Trump administration by May 1 on who to exempt from the tariffs.

Australian officials are hoping to secure a permanent exemption but the EU is threatening to retaliate with a list of 300 American exports that will face new tariffs if the US does not back down.

“That is what we have tried to avoid, and that is also the very clear message that we have passed to the US – that we have this list and we have to react because we consider their tariffs as totally illegitimate,” Ms Malmstrom said.

“Again, I hope not, because we don’t want to escalate a conflict and it might lead to an escalation and this is what we are trying to avoid. We made that very clear to our American friends.”

The Australian negotiations with the EU are part of a broader agenda to reduce trade barriers under the Trans Pacific Partnership in Asia and the EU’s recent deals with Japan, Singapore and Mexico.

The EU executive needs authorisation from its 28 member states to start negotiations with Australia. Ms Malmstrom said this was expected “soon” and could happen at a council meeting on May 20.

This would clear the way for her to visit Australia in June for talks with Trade Minister Steve Ciobo.

The stakes are significant, with the EU scoping study for the deal concluding that the economic gain to the EU would be worth €4.9 billion, or about $8 billion, by increasing GDP by 0.02 per cent.

Australia stands to gain €4.2 billion, or about $7 billion, from a 0.2 per cent increase in its GDP.

“Of course we are facilitating for our companies to trade with each other and build tighter economic ties, but it is also strategic for both of us,” Ms Malmstrom said.

Australian officials believe the biggest objections to the deal will come from the farm lobbies in France, Ireland and Poland and that the worst-case scenario could stretch out the negotiations for years.

Mr Ciobo is aiming to conclude a free trade deal with Britain soon after it leaves the EU next year, but a deal with the EU could take longer. Under a “fast-track” process it requires approval from each member government but does not give local parliaments any veto power – a scenario that stymied a Canadian deal.

Australian producers are especially concerned about geographical indications, the rules that saw the labels Champagne, Port and Sherry banned from Australian wines in 2009, but the EU is determined to expand its list of “brand” names.

“That is an important issue in all our trade talks. That has been mentioned in the scoping study and that is in our mandate, and we’ll take it from there,” Ms Malmstrom said.

“Some of these iconic names in cheese and hams, they are very important for certain member countries.”

A different dispute flared two years ago when Australia’s anti-dumping authorities halted imports of tinned tomatoes from several Italian suppliers on the grounds they were being “dumped” below cost on the Australian market.

Ms Malmstrom said this was not a concern because similar disputes had been handled by the World Trade Organisation.

“We are working very hard now to strengthen the WTO and I have spoken to Mr Ciobo about how we can do that,” she said.

“You bring the cases to the WTO. There is a dispute mechanism. Sometimes you win, sometimes you lose, and then you carry on. That happens with countries with whom we are very close friends and also with countries where relations are maybe more tense. So that’s not a problem.”

European farmers have complained about the prospect of more Australian beef arriving in their supermarkets, but Ms Malmstrom said that issue could also be managed because the Australian trade deals with Japan, Korea and China had changed the market.

“With all the trade agreements that you guys have been making lately, there’s not a lot of beef left to export to Europe because you have other markets more closer,” she said.

“So I don’t think the beef issue is such a big problem. What we have seen is that, on the contrary, we can have the opening up of the service sector and public procurement. So this is a win-win for us and for you as well.”