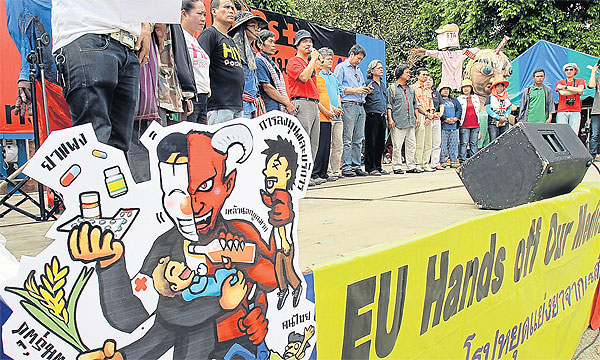 Inside Views The EU-Thailand FTA: What fate for access to medicines?

Following the public outcry over the EU’s demands for stringent intellectual property rules that would dramatically raise medicines prices in India, you would expect the EU to think twice about making similar demands in future trade agreements, particularly with low- and middle-income countries. Yet, this is precisely what is going on now in the negotiations for a free trade agreement between the EU and Thailand.

Delegates from both countries are meeting this week in Brussels for the third round of negotiations. Ahead of this round, a delegation of leading activists and academics from Thailand visited Brussels to share their concerns with the European Commission negotiating team and members of the European Parliament.

Why? Because there is tremendous pressure on Thailand to conclude a trade deal with the EU. The Generalised Scheme of Preferences (GSP), under which Thailand currently benefits from trade preferences with the EU, is to end at the beginning of 2015, and Thailand is being hastened into concluding a trade deal in an unprecedented short time frame. Negotiations are scheduled to finish before the beginning of 2015.

The question is: Will the EU use these trade negotiations to—once more—put up more monopoly barriers that will sustain the status quo of inequity in health between citizens in high and low/middle income countries?

Civil society groups in Thailand and Europe have sounded the alarm over these negotiations in the past months. We fear that access to medicines for people living in Thailand will be one of the things traded away. This will seriously jeopardise the current national health coverage system, under which more than 90 per cent of the population receive drugs on the national essential medicines list free of charge.

And we have good reasons for this fear. A recently leaked draft negotiating text shows that the EU is pressing for stringent intellectual property and investment protection demands that can affect the right to health.

Thailand has a national health coverage and HIV/AIDS treatment programme in place, guaranteeing almost universal free access to antiretroviral drugs (ARVs) and other drugs on the national essential medicines list to its citizens. It produces generic versions of some essential drugs and has used legal flexibilities to intellectual property rules (TRIPS flexibilities), including compulsory licenses, to sustain its treatment programmes in the past.

Overreaching intellectual property protection and enforcement restricts and delays legitimate competition from generic manufacturers. It sustains market monopolies, high monopoly prices, and affects access to affordable treatment. This is, however, what the EU is proposing in the leaked draft negotiating text.

For example, in one chapter, the EU is proposing rules that would expand and lengthen patent monopolies on drugs through data exclusivity and patent term extensions. Patents were intended to be a reward for successful research and development (R&D). But companies are seeking additional rewards for data gathered during the R&D process in the form of data exclusivity provisions that, in effect, prolong their monopoly period. This comes at the expense of access to medicines.

A prospective impact study done in Thailand, which used a macro economic model to measure the impact of data exclusivity and patent term extension proposals, forecasted that all scenarios (patent extensions of 2, 5 or 10 years and data exclusivity rules of 5 or 10 years) would have a negative impact on the pharmaceutical market. It would lead to increased drug expenditures, reduced access to medicines and a contraction of the domestic pharmaceutical market.

Another worrying chapter is that on ‘investment protection’. The EU is likely to introduce a provision that protects intellectual property rights held by multinationals, including patents on drugs, as an ‘investment’. Foreign investors will get the right to sue governments for damages if the government’s actions interfere with the enjoyment of their investments.

This is not only of concern for low- and middle-income countries; there is currently an ongoing and heated public debate within Europe over the adverse impact on health of similar investment protection proposals in the context of the EU-US free trade agreement (TTIP).

The EU should learn from the global outcry against strong intellectual property and investment rules in previous trade negotiations. It should not trade away the health of citizens in Thailand just to reach a beneficial trade agreement. The EU must consider the broader context and effects of its intellectual property and investment demands in trade agreements, not only for public health, but also for socioeconomic development.

Thailand should be allowed the policy space to regulate for the health of its citizens. If not, people in Thailand may, in the future, no longer have access to the medicines they need.

Tessel Mellema is a policy advisor with Health Action International Europe. She specialises in intellectual property (IP) law with specific expertise on the interplay of IP and EU policies that may have an impact on access to medicines within the EU and abroad. At Health Action International Europe she is responsible for the EU Trade & Access, and Essential Innovation & Access campaigns.