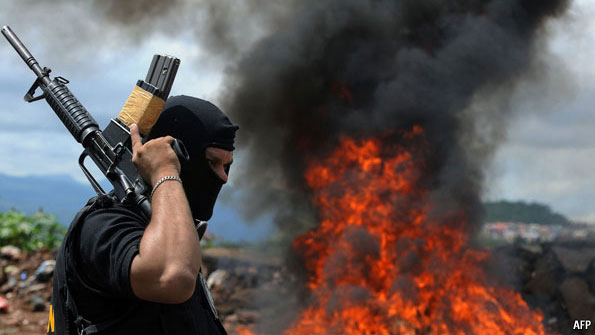 The impact of CAFTA: drugs, gangs, and immigration

It’s clear that the free-trade panacea promised by policymakers, especially its most enthusiastic cheerleaders has not come to pass.

Throughout the process the trade agreement was controversial, and faced staunch opposition from Central American leftist political parties, social movements, and civil society. It also faced strong resistance from U.S. solidarity, labor, environmental, and human rights organizations, as well as in the U.S. House of Representatives where it barely won ratification 217 to 215.

Proponents of the deal presented its fundamental objectives as the stimulation of new trade flows, generation of economic growth, and creation of good jobs by eliminating tariffs and “other trade barriers” a euphemism for any regulation or law that might limit a transnational corporation’s right to endless accumulation of profit.

More ideological defenders went so far as to tout the agreement as a panacea for the United States and Central America’s transnational ills, such as immigration, drug trafficking, and gang violence. In the debate leading to the CAFTA vote Representative Tom Davis (R-VA) urged his fellow members of Congress to support its passage because, “…we need to understand that CAFTA is more than just a trade pact. It’s a signal of U.S. commitment to democracy and prosperity for our neighbors. And it’s the best immigration, anti-gang, and anti-drug policy at our disposal … Want to fight the ever-more-violent MS-13 gang activity originating in El Salvador but prospering in Northern Virginia? Pass CAFTA … Want to begin to ebb the growing flow of illegal immigrants from Central America? Pass CAFTA.”

Similarly, then-president George W. Bush’s CAFTA sales pitch claimed that, “For the young democracies of Central America and the Dominican Republic, CAFTA … means good jobs and higher labor standards for their workers. ... People have got to understand that by promoting policy that will help generate wealth in Central America, we’re promoting policy that will mean someone is less - more likely to stay at home to find a job. If you’re concerned about immigration to this country, then you must understand that CAFTA and the benefits of CAFTA will help create new opportunity in Central American countries, which will mean someone will be able to find good work at home, somebody will be able to provide for their family at home, as opposed to having to make the long trip to the United States. CAFTA is good immigration policy, as well as good trade policy. And it’s good geopolitics, as well. For the western hemisphere, CAFTA would bring the stability and security that can only come from freedom. That’s what we’re interested in - we’re interested in spreading freedom.”

Today, it’s clear that the free-trade panacea promised by policymakers, especially its most enthusiastic cheerleaders has not come to pass. It’s not even close! The region, especially Central America’s so-called Northern Triangle (Guatemala, Honduras, & El Salvador), has become among the most violent parts of the world, and generated an unprecedented mass exodus of child refugees to the U.S. southern border in recent years. But I’m not arguing that CAFTA is the immediate cause for this humanitarian crisis. I acknowledge that its proximate trigger mechanism is the horrendous level of drug and gang related violence, which has become the daily scourge of life in Central America. Still, this does not absolve CAFTA of responsibility either, because that violence has been fueled by the economic conditions in these countries. Thus, ten years after its implementation it’s more important than ever to look back and understand the real effects of CAFTA on Central America. Has it been a force to mitigate Central America’s problems or has it added fuel to the regional fire?

Two sides of the same coin

Defenders of CAFTA can point to macroeconomic indicators such as GDP growth, import and export growth, and job growth as its major accomplishments. And while the exact numbers vary for each of the different countries that have signed the agreement, generally speaking in strictly economic terms this may be true. GDP has grown, as have imports and exports, and jobs, especially in the maquila sector. Between 2005 and 2014 total imports by CAFTA countries from the United States grew by nearly US$15 billion dollars (84 percent rate of growth). Meanwhile Central American exports to the United States grew by about US$10 billion (57 percent growth rate).

This has led to the displacement of the rural population from their traditional economies and into the cities. And while jobs especially in the maquila export sector have increased, they have not kept up with demand, especially for employment of young men. Thus, in a process reminiscent of Britain’s industrialization, with its enclosure movement that displaced peasants from their rural homes and created a large dependent urban proletariat, Central American farmers have been pushed from their lands by cheap subsidized U.S. imports.

As a result, rapid urbanization in Central America has been accompanied by chronic joblessness, and non-existent possibilities for economic advancement. Couple this bleak forecast with an overabundance of cheap and readily available weapons of war and now unemployed former combatants trained to kill (with no psychological attention), plus an influx of deported gang-members from the United States, the allure of easy money from drug trafficking, as well as a young, steadily growing population, and you have all the ingredients for a man-made disaster. It’s no wonder then that like their European counterparts two centuries ago, many of whom found themselves as surplus labor unable to make a living in their home countries, hundreds of thousands of Central Americans have recently made the same decision to migrate to the United States when facing a similar choice.

CAFTA as Framework for US Regional Development Assistance

Just as troubling has been the role played by CAFTA in relations between the United States and Central America, especially in those countries where progressive movements have come into power and sought to implement changes. CAFTA is the framework for the United States’ economic development plans in Central America – the Partnership for Growth, the Alliance for Prosperity, the Millenium Challenge Fund. The trade agreement has given the U.S. government’s opportunity to leverage development aid into political influence, and corporations the legal mechanisms to challenge environmental regulations. Recent examples of U.S. intervention in Salvadoran domestic affairs, like pushing for a Public Private Partnership Law, and the U.S. protest over the Salvadoran government’s awarding an important seed purchase program to local cooperatives instead of a Monsanto subsidiary, occurred within the framework laid out in CAFTA. As Alexis Stoumbelis, Executive Director of the Committee in Solidarity with the People of El Salvador (CISPES) explains, “In the face of popular, democratic opposition to transnational corporate control, we’ve witnessed both corporations themselves and the U.S. State Department attempt to enforce CAFTA in various ways - from US$300 million lawsuits to threats to withold development aid. It really lays bare what the Central American social movements said from the beginning, that these free trade agreements are nothing more than corporate rights agreements. That’s why we’re so concerned to see the expansion of CAFTA, which has been so disastrous for working people, the environment and rural economies, at the center of the U.S. government’s regional development strategy, including the Alliance for Prosperity."

At the very least, CAFTA’s implementation to date has failed to curtail violence and migration from Central America as promised by President Bush and other CAFTA proponents. But the evidence suggests that CAFTA’s impact is actually worse than that. While U.S. exporters have benefitted from increased trade, a negative by-product of that economic growth has been the devastation of small family farmers who’ve had a hard time competing against subsidized cheap basic grains.

Likewise, the growth of urban manufacturing jobs hasn’t kept pace with the growth of displaced rural to urban migrants. The huge reserves of surplus labor and lack of employment opportunities has been the powder fueling the drug and gang violence plaguing the region and sparking international migration. At the same time, attempts by progressive governments to change policies toward more equitable economic growth have been stifled using the very mechanisms that CAFTA put in place. In sum, CAFTA has also served as a straightjacket on Central American governments’ trade and even domestic policies when they try to use state power to reverse some of the agreement’s most adverse economic and environmental effects.