The Mexican FTA that Macri wants for Argentina 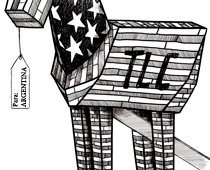 The tale of a disaster waiting to happen? Mauricio Macri promised to open up to imports. And there is no doubt that he will do this. But 21st century “Menemism” proposes so much more: the implementation of a free trade agreement (FTA) between the US and Argentina. Coupled with this, is the agreement between the former mayor of Buenos Aires and Paul Singer (vulture funds) for Vaca Muerta, ensuring that all is set for our country to be destroyed.

To fully understand the true meaning of "opening up to imports", we will briefly review the FTA signed between the US and Mexico.

The former president, Carlos Salinas de Gortari (1988-1994), ended his term by signing a FTA with the US. On bidding farewell to the government, he promised that with the agreement, "poverty and migration would end and a Great New Era in Mexican agriculture would begin". At issue, in a nutshell and in his own words, was a way to reach "the same level of development as First World countries". In 1994, the North American Free Trade Treaty (NAFTA) was signed and implemented by the administration of Ernesto Zedillo. The Mexican productive and industrial apparatus – till that time the bearer of significant development achieved through an import-substitution policy (in no sense insignificant) - was destroyed by the textile industry. As this industry is detached from all local manufacturing linkages and requires a very low level of technological investment, it ensured sub-development and the socio-economic decline of the country. In parallel and following the unrestricted entry of highly subsidized US products, the Mexican rural universe would literally be devastated. It is calculated that from 1994, 1,870,000 peasants had to abandon their activity (Periódico La Jornada - 2/01/14). Economic primarization exponentially rocketed, and with it so too, the impoverishment of the popular classes, emigration and drug-trafficking (analyzed next).

The authors of an extremely interesting study "La migración laboral México-Estados Unidos a veinte años del Tratado de Libre Comercio de América del Norte" (Revista Mexicana de Ciencias Políticas y Sociales - May/August 2015) analyse the results of NAFTA. "The economic growth witnessed in the period 1994-2013, barely reached an annual average of 2.4%, a lesser figure when compared with the growth rate achieved in the period 1960-1981 when the average annual growth rate was 6.8%". The slow economic growth was accompanied by an exponential increase in employment in textile factories. This led to an increase in both unemployment and an expansion of the black economy (about 60% of the working population were employed in the black economy). But that’s not all. Neoliberal policies would cause a very sharp deterioration in the labour market: "In 2001, 10.3% of the working population received an income that was equal to five times or more the minimum wage; in 2013, that figure dropped to 8.4% of the population...at the same time, last year, 65% of those employed received an income that was equal or less than three times the minimum salary ". In other words, and in keeping with the official data provided by the Consejo Nacional de Evaluación de la Política de Desarrollo Social, in 2012, around 53.3 million people (45.5% of the population) lived in conditions of poverty.

Destruction of the Agrarian sector

One of NAFTA’s principal objectives is to impose US agricultural production on the Mexican people. In this regard, researchers at the Universidad Nacional Autónoma de México, authors of the work cited above, indicate that after NAFTA was signed, 4.9 million jobs in the sector have been lost, as its GDP fell from 5% before the signing of the treaty to 1.5% in 2014. The devastation in Mexican agriculture would be made even worse by a massive adjustment on subsidies for agricultural production. According to "the statistics of the Secretary for Agriculture and Public Credit, in1995, 7.3.% of public spending was allocated to the agricultural sector. In 2013, this was reduced to just 3.1%". Accordingly, the agricultural trade balance sank further into deficit: "Whereas in 1980 the country’s dependency on food was 15%, by 2011 it was almost 50%".

The Destruction of Industry

The Salinist administration guaranteed that by opening up trade and through economic liberalization, Mexico would be integrated into the world. This would bring a rainfall of foreign investments, spilling over into exports, jobs and development. But history teaches us - and the Mexican case confirms it – this argument is nothing other than a despicable lie. Not only are Industrialized nations not interested in genuine economic development (from their well known investments) in host states, but it does not suit them. In this regard, the researchers explain to us that in their country, after NAFTA was signed: "foreign investment was essentially directed to the textiles industry. This had detrimental consequences for workers and furthermore, did not generate the development so longed for. On the one hand, they offer temporary work, with fewer benefits, low salaries and very flexible hiring systems". Another problem with this industry, "is that it does not create the added value of a spill over of know-how for national industry. This is because the focus is on assemblage with hardly any local components being incorporated. One can therefore say that the industrial policy the country has pushed through, has not sparked off the development anticipated... NAFTA’s impact on the agricultural and industrial sectors were such that the growth in GDP per Mexican household of 18.6% represents half the Latin American average; this small increase did not allow combatting poverty in the country, given that 52.3% of the population has endured this condition from the time the Treaty was signed". We must add to this that salaries increased an inadequate 2.3% in the period 1994-2012, worsened by the fact that 60% of the working population was in the informal sector. They then lack "access to social security and their income is on average is a third less than the income of those in the formal sector ".

Neoliberalism causes a dramatic increase in social inequality, poverty and unemployment. The popular classes, deprived of all welfare apart from the most basic conditions for subsistence, tend to migrate in search of better social and labour conditions. Africa is the best-known case, even though what happened in Argentina in the period 1976-2003 – is part of the same phenomenon (on a much smaller scale of course): expulsion of citizens, scientists and technicians. Returning to the case of Mexico, let us examine the consequences of free trade and its impact on migratory flow in this country. The authors explain: "The phenomenon of the international migration of workers is closely related to the inequalities and asymmetries of the capitalist system and assumes, furthermore, the transfer of surplus value from less developed centres to industrial or developed centres. If countries that expel migrants are characterized by applying economic policies that have increased levels of unemployment, the deterioration of labour conditions, the lack of support for agriculture and the increase of informal work, in host states, migrants have a usefulness that is expressed in the difference between the unit labour cost of migrants with respect to native workers ".

NAFTA converted Mexico into the first global migratory route to the United States. 25% of migrants came from the agricultural sector followed by 17% from the construction sector. So now, due to the country’s economic primarization (a shortage of employment opportunities for highly qualified workers), "around 36% of Mexicans with a doctor’s degree, are found practising in the US, while 33% of Mexican students that have graduated with engineering or technological degrees go abroad". The authors consider that these statistics "are worrying, because in the period 2000-2012, the number of highly qualified migrants born in Mexico that live in the US, has increased 2.4 times, going from 411,000 to 1 million. This translates into 1 in 10 Mexican graduates in the neighbouring country or 1 in 4 Mexicans with postgraduate degrees living in the US.".

The perverse Mexican neoliberalism is sustained macro-economically by the sending of remittances (by Mexicans that “work” in the US) and by deregulation and creeping de-nationalization of the oil sector, once in the hands of the State and its para-statal business PEMEX. Oil exports and remittances are the main income streams of fresh dollars to the economy, feeding international reserves, the sole purpose of which is to hedge market volatility and to pay interest and service external debt.

To sum up, free trade has had its meltdown in Mexico, the most backward of all the countries that belong to the Organization for Development and Economic Development (OECD). Social inequality, de-industrialization and poverty do not stop its progress. When Macri proposes "to open up to imports ", he is actually proposing a free trade treaty à la mexicaine, supported by a new de-nationalization of the oil sector, with the handing over of Vaca Muerta and YPF to financial terrorism and western speculation, the same that governs the fates of our Mexican brothers. Next Wednesday, we will also analyse, using Mexico as a case study, why Argentinian drug trafficking supports a triumph for Mauricio Macri. Observatorio de la Energía, Tecnología e Infraestructura para el Desarrollo (OETEC) - 11 November 2015