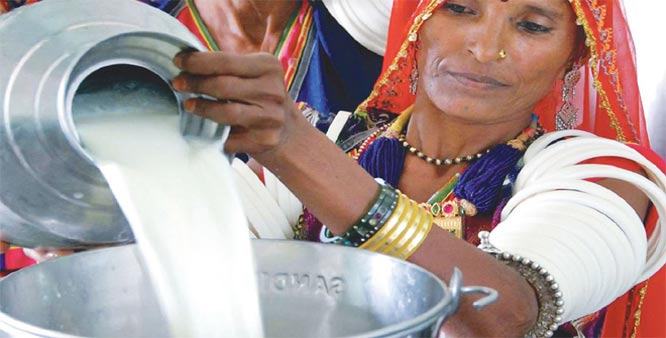 The milk crisis in India : The story behind the numbers

This past two years has witnessed farmers across India demonstrating for their livelihoods : a hike in milk procurement prices has featured as a key demand. Their demand reflects a grave crisis underway in the Indian milk market, which is threatening to undermine the multifunctional role of livestock and the way of life of entire communities.

Small and marginal farmers, the backbone of the Indian milk market, have been hardest hit by a price war waged by dairy processors (companies), beginning January 2015. Faced with mounting stocks of unexportable milk powder, brought on by a slump in global milk powder prices, some of the big domestic dairy players began to flood the domestic market with cheaply priced milk for consumers. At the same time they were lowering the prices at which they were procuring milk from farmers. This was severely affecting small farmers and has also impacted the peoples’ milk market, commonly referred to as the “informal” or “unorganised” milk market.

Building on research in the Indian States of Telangana and Andhra Pradesh, the Food Sovereignty Alliance (FSA) shows how this crisis extends well beyond the small farmers of Telangana and Andhra Pradesh State in South India. It affects small farmers nationally as well as globally. This book tells the story of how global trends including the ongoing threats of multilateral trade agreements such as the EU-India Free Trade Agreement and the Regional Comprehensive Economic Pact (RCEP), are driving countless small dairy farmers into debt and ultimately out of farming. It calls for a solution, based on nurturing the resilience of the small, localised networks of milk producers, cooperatives and consumers.

The authors provide clear evidence that the only hope for the future lies in localised peoples’ milk markets based on agro-ecological livestock cultures : cultures where livestock are reared, not as machines to produce single commodities, but as sentient beings playing a multifaceted role in food farming production systems.

This report authored by the Dairy Working Group of the Food Sovereignty Alliance, will be of interest to farmers’ movements, Dairy Cooperatives, Students, Researchers, Policy framers and anybody who is interested in understanding what it takes to bring them their daily glass of milk !

The report can be accessed at The Milk Crisis in India