The Right to Run their Own Economy: AIC Policy Paper on Palestinian Trade 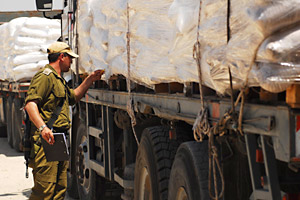 An Israeli soldier inspecting a shiptment of wheat at the Karni crossing before it can be tranferred into the Gaza Strip.

Numerous reports by the World Bank and the United Nations Conference on Trade and Development, amongst others, detail the need to lift restrictions on the movement of goods and people placed by Israel on the Occupied Palestinian Territories (OPT) (for references, see end of document). All indicators show that these obstacles are stifling the Palestinian economy, with trade and labor flows being the chief casualties, resulting in widespread poverty and dependence on humanitarian aid.

Poverty afflicted 30.8% of Palestinian households in 2006, with 18.5% in deep poverty. At the same time, the number of checkpoints and other barriers in the West Bank doubled in 2006 as compared to 2005, reaching 541 in July 2007, with a further 524 “flying” (mobile and irregular) checkpoints. The Gaza Strip has been under blockade since June 2006, when an Israeli soldier was abducted, and even more so since the Hamas takeover of June 2007. Exports from the West Bank declined by some 16% in 2006, and trade has almost completely been halted in the Gaza Strip. The Palestinian gross domestic product (GDP) contracted by 4.2% in the first quarter of 2007, after a shrinking by over 8% in 2006. Donors paid a record USD 1.4 billion in the same to the OPT. There is a correlation in these figures. This is an expensive solution for the international community that donates aid, an unsustainable one in the medium and long term (though the crisis is indeed already “prolonged” in the words of the UN Relief and Works Agency), and is moreover anomalous, since historically the OPT have not been a recipient of humanitarian aid. In this policy statement, the Alternative Information Center contends that these distortions can only be rectified under full Palestinian sovereignty.

Every time an international actor succeeds in pressuring Israel to ease some of the measures of closure, such as when Condoleeza Rice, Javier Solana and James Wolfensohn brokered the Agreement on Movement and Access in November 2005, the UN Office for the Coordination of Humanitarian Affairs soon after reports that Israel has violated the agreement and reimposed the blockade. The siege of Gaza and its disastrous humanitarian consequences are a case in point (poverty there being twice the rate of what it is in the West Bank), claims of Israeli withdrawal and hence “disengagement” notwithstanding. There is no use, repeats the World Bank, in planning Palestinian economic development under these conditions. The procedure of demanding freer movement recommences, only to be ignored again. There is a flaw in this course of action: even if Israel were to open all the safe passages and points of access for Palestinian goods, as is required in binding agreements, the Palestinian economy would still be limited by Israel. It would be limited not only by the uncertainty caused by Israel’s continued capacity to unilaterally impose closure (which causes investment flight), and to do so without suffering any adverse effects in terms of economic loss or international censure (since the international community has shown itself to be rather forgiving of Israeli breaches of contract), but also limited by the very terms of the binding agreements. First amongst these agreements is the Paris Protocol of 1995.

During the negotiations that led to the formulation of the Protocol, the team of Palestinian economists pushed for the signing of a free trade agreement between Israel and the OPT. Israel demanded a customs union and the Palestinian negotiators reluctantly agreed to this in exchange for the guarantee of free movement of workers from the OPT to Israel. Many Palestinian economists preferred a free trade agreement, considered a looser type of arrangement than a customs union. According to the latter, not only are goods traded freely between the two entities, but also trade policy towards third parties is harmonized. In contrast to this, in a free trade agreement each signatory can lay down independent policy with its own trading partners. The autonomy to set one’s own economic policy is the marker of a sovereignty that the Palestinians never had.

Israel’s objections to the free trade agreement concerned the possibility that certain goods could seep into the Israeli market via Palestinian trade with other countries, thus by-passing the barriers Israel set up to protect its economy from cheap imports. Israeli tariffs and customs policies therefore also had to apply to Palestinian imports, identified at Israeli borders, where the custom duties are collected and then transferred to the Palestinian Authority. (This happens, however, only when the Israeli government deems the Palestinians worthy of this service: the monies were withheld during the Second Intifada and during Hamas’ period in government.) The underlying problem that makes a free trade agreement unviable is the absence of an international border between Israel and the OPT. If a border existed, nothing could seep into the other’s market to cause chaos in the import tariff régime. Yet a border is an element of sovereignty that is not granted the Palestinians. Instead of a border, they get closure.

It is important to note that a free trade agreement is not the only alternative to the Paris Protocol. Any agreement that weighs the interests of both sides and gives equal representation to both sides, including a customs-union managed and operated by a joint Israeli and Palestinian committee, is a preferable agreement to an agreement that has been unilaterally enforced and which only one side is forced to abide by.

The Paris Protocol has adverse repercussions for the development of the Palestinian economy. For instance, certain Arab and Muslim countries do not have diplomatic or trade relations with Israel as they object to Israel’s occupation, yet these same countries might offer preferential trade terms to the Palestinians in a gesture of solidarity for a commodity such as petrol. Some goods in certain quantities, specified in lists A1, A2 and B of the Paris Protocol, are permitted to be imported to the OPT from Arab and Muslim countries (predominantly from Jordan and Egypt, which have signed peace agreements with Israel), despite Israel’s own restrictions on trade with these countries. These products consist mostly of food stuff, which is culturally specific and therefore does not overlap much with patterns of consumption in the Israeli market. Other materials that are permissible to import in certain quantities from Arab or Muslim producers include aluminum (used in construction), some petroleum derivatives, and other construction material, but significantly not gasoline, or motor vehicles older than three years. The building of infrastructure was indeed a priority project of the Palestinian Authority in the 1990s, set to redress the infrastructure gap inherited from years of Israeli neglect. Private housing construction is an important family investment in the context of a growing Palestinian population.

However, neither food imports nor private construction contribute to the productive base of the economy. The development of the Palestinian Territories has always been seen as predicated on an open trade régime. Poor in natural resources but endowed with an educated and entrepreneurial workforce, all plans for development in the OPT envisaged the import of raw input material or semi-finished products and the export of commodities with high added value. The customs union with Israel, a developed economy with very different needs, belies this plan, despite the provisions in lists A1, A2 and B, which are in any case inadequate. In view of this, the supposed advantages Palestinian trade gained in terms of free trade agreements with the US and European countries, thanks to provisos of the Paris Protocol, are of little importance. The US and Europe are not the sources of cheap raw material, but of expensive commodities and agricultural products whose production is subsidized domestically and therefore difficult to compete with.

The idea of free trade as the economic remedy for Palestinian underdevelopment is related to a doctrine popular in the 1990s, whereby free trade would bring prosperity and peace to the region. The formation of a Palestinian state was viewed as a means to break the Arab and Muslim countries’ boycott of Israel, since the latter could not withhold recognition of Israel if Palestine were “free” on terms that the Palestine Liberation Organization itself accepted. The benefits this would supposedly bring the regional economy were called “peace dividends.” The whole idea was based on shaky foundations, but it nevertheless informed plans for the OPT, whose economists continue to advocate free trade. However, they do not have the power to put the idea to the test. To do this, Palestine must be a sovereign state in all senses.

Another important aspect of sovereignty, the lack of which is hampering Palestinian trade, is representation in the World Trade Organization (WTO). Israel is represented in the organization, and the current customs union means that any decision taken by Israel also affects the Palestinians, who have no influence over the Israeli delegation to the WTO. This has far-reaching effects on the Palestinian economy, and agreements approved by the WTO are expected to bind a future Palestinian state.

All of this seems rather theoretical in a situation of closure unilaterally imposed by Israel on the OPT. One must therefore conclude that Israel is not interested in the supposed “peace dividends” associated with free trade based on the sovereign economic policy of all parties. Israel evidently has other plans, most obvious of which are territorial expansionism and control of the population, both incompatible with Palestinian sovereignty. International aid donors, who are paying to keep a humanitarian catastrophe at bay while Israel pursues its other plans, and international political actors whose efforts to bring a modicum of normalcy to Palestinian trade conditions are constantly being snubbed, should, however, be very interested in Palestinian sovereignty.