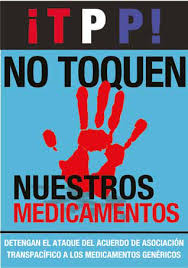 It is calculated that a poor woman with breast cancer would not be able to access a very effective medicine created today, but only in 25 years. Only those who have money will be able to do so and this is so in the case of several serious illnesses ; especially in countries such as Peru, with such precarious health systems. After patents, test data with greater protection in the TPP and additional time that is required to manufacture a biosimilar (generic) medicine accessible to the purse of poor people, it will already be too late for many patients.

It is not all over : despite its signature on 4 February in New Zealand, the TPP still needs to be approved by the national Parliaments. We hope that a serious debate has ensured that this mega trade and investment deal is a still-born.