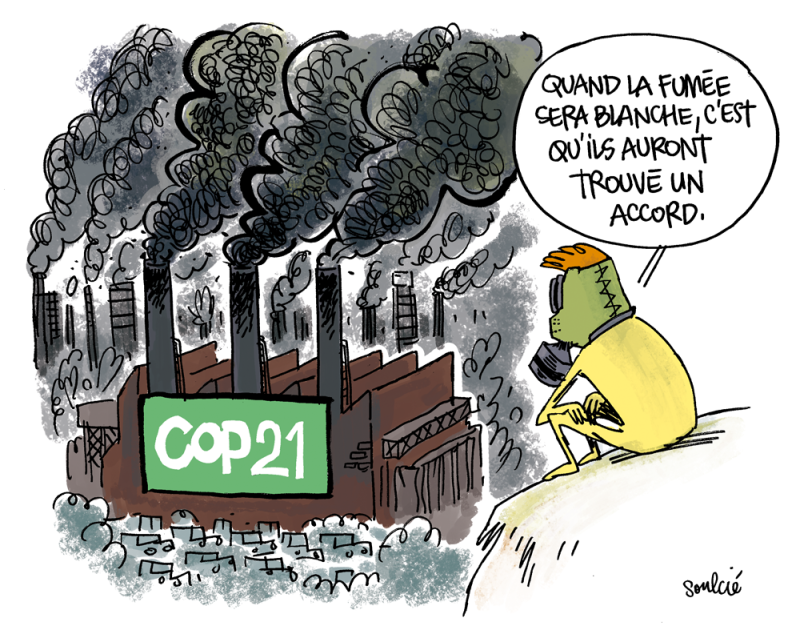 Threats against environmental directives, legal arbitration against States, the growth of trade generating CO2… while discussions between the United States and the European Union continue, the author of this article demonstrates that this treaty is incompatible with the Paris Agreement on Climate.

From 22 to 24 February 2016, the United States and Europe will meet for the twelfth time with a view to establishing the world’s biggest liberalized market. Now it seems that delegates may consider environmental protection and action against climate change as «technical barriers to trade», that accordingly need to be eliminated.

So Michael Froman, the lead US negotiator, has declared that the European Directive promoting renewable energies and the Directive on fuel quality are «technical barriers to trade» that must be dismantled through the vehicle of the Transatlantic Trade and Investment Partnership (TTIP [1]), also known as the Transatlantic Free Trade Area (TAFTA [2]). Now, these directives are at the heart of our economies’ energy and ecological change.

A Means for Challenging Regulations

The first directive is an instrument allowing Europe to reach 20% of the energy produced from renewable sources and to take to the 10% minimum the fuels in the consumption of petrol and diesel fuel. The second directive is ancillary, requiring suppliers of combustibles to reduce by 10%, from now to 2020, the emissions generated throughout the life cycle of combustibles. But these directives would pose significant constraints on US industrials that would prefer not to have to take account of the Single European Market. There is every reason to think that if these directives had not been neutralized by the TTIP, they would no longer be realized, so that more ambitious objectives for the future, that is to say, beyond 2020, would no longer be fixed.

The overwhelming insistence of the United States and the Europeans to build into the treaty an ISDS clause (Investor-State Dispute Settlement), or an alternative that is not so different in substance, is also a bad sign: a professor of international law, Gus Van Harten, has reviewed 196 ISDS procedures. 34 cases concern disputes over natural resources and another 40 on challenges to government decisions aimed at public health and the environment. In other words, private investors and as it happens the big multinationals that have the resources to resort to this procedure, benefit through using this vehicle as a means to challenge regulations even though they are taken in the public interest and the conservation of the planet. ISDS creates a new gap in the Paris Climate Agreement and in related agreements such as the Convention on Biodiversity and the Nagoya Protocol.

The promise of a derisory annual increment of 0.05 in GDP

According to a recent study of the US Chamber of Commerce in Europe (which must be taken with a pinch of salt), with the TTIP, exports from most EU member states to the United States would increase by at least 20% (a 23% increase for France). Assuming that this figure is close to reality, the flow of goods will have to be transported by sea and air freight for more than 5,000 kilometres. But, the international transport sector has been exempt from the Paris Agreement! This is of particular concern since the OECD considers that the CO2 emission attributable to international trade would increase by 290% from now to 2050…

And the reason for all this? For the sake of a promise of a derisory annual increment of 0.05% of the GDP (Gross Domestic Product), which would not even benefit the whole population fairly: in fact, only a handful of businesses [3] and their shareholders will actually profit from it, while SMEs, workers, consumers, ecosystems and future generations will lose out. This miniscule increase in the GDP, a benchmark which, furthermore, is fiercely decried, does not in any way justify the enormous environmental (and social) risks outlined above.