The TTIP and the Privitization of Health 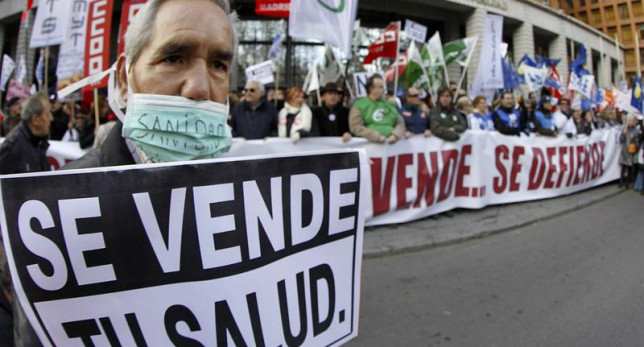 Translated by Anoosha Boralessa. Not reviewed by bilaterals.org or any other person or organization.

The Transatlantic Trade and Investment Treaty (TTIP) may present a genuine threat to health and to the outcomes we have reached in the healthcare systems today. With all its problems, the National Health Care System (SNS) that we know today, is internationally recognized as one of the best and most efficient in the world. In the State of Spain, Osakidetza holds recognized prestige in this field. Experts agree that “universal health systems with public property and management and based on Primary Care are those that offer the best results in health and are also the most efficient, the fairest and the most humane”.

The TTIP between the EU and the US, that is being negotiated from July 2013, claims to establish the biggest “free market” in the world between both economic blocks, with more than 800 million potential consumers, eliminating custom barriers and standardizing (to the bottom) those laws on social protection, labour or the environmental that are more stringent, have greater social content in Europe and that can present an “obstacle to free trade” between the US and the EU.

With respect to the risks in relation to the health service that may follow the signing of the treaty, it must be said that liberalizing trade and investment on the part of big, multinational corporations, would facilitate establishing US private insurance companies in EU member states by going further down the line of privatizations undertaken in recent years in the Spanish State, especially in some autonomous communities such as the Madrilenian, Valencian, Catalonian and Galician.

The European Public Health Systems would be an open market for US companies to participate. With this initiative, the transnational businesses claim to access to the “public health pie” of European countries to obtain huge profits at a time when they are experiencing difficulties in negotiations on other sectors.

Neoliberalism, that sees health, education and social services as simply more commodities, proposes to end the public management of these sectors, by privatizing them on the basis of specious arguments like “private sector management is more efficient”. The pharmaceutical industry lobby is one of the most powerful in the world and has great interest in approving the TTIP, which will allow it to increase profits at the expense of jeopardizing the sustainability of the public health systems that nowadays are faced with enormous difficulties to cover the cost of patented drugs. In fact, expenditure on pharmaceuticals is already one of the main problems of the SNS : our expenditure on medicines is almost double that in the EU.

Pharmaceuticals is one of the industries with the biggest profits both in the US and in Europe. According to the United Nations, it is the third economic sector in the world after arms trade and drug trafficking. The TTIP would further strengthen the stronghold of the powerful pharmaceutical industry that could impose favourable measures in its interests : • extending patents for drugs • delaying the market-entry of generics • reducing the requirements for patents • controlling state agencies evaluating medicines and health technology • exerting major influence on state organs that establish price policies • taking control of clinical tests for new drugs etc.

In this way, it would be difficult for people to have access to medicines, especially in times of crisis. It would increase systemic irrationality and would impact the health of the people, morbidity and mortality.

Businesses in the health and pharmaceutical sectors are among those that have exerted the most pressure during the drafting of the TTIP. As an example of the transcendental role of multinationals in developing the TTIP, it must be said that 92% of the meetings the European Commission held to prepare for the negotiations were with private corporate lobbies ; only 4% were with groups that defend the public interest and the remaining 4% with university experts and public administrations.

Although at the beginning of 2016, the European Parliament lobbied the European Commission which is the body negotiating the TTIP, to exclude the most sensitive public services such as health from this treaty, the European Commissioners negotiated the treaty single-handedly with corporate lobbies, behind the backs of democratically-elected Parliamentarians. They have the last word and it is hardly likely that they will take into account what parliament recommends.

Compliance with the treaty would make it impossible to reverse privatization decisions or profit-caps for multinationals. This is because the so-called “investor state dispute settlement mechanism” (ISDS) that would resolve disputes between businesses and states through a private “international arbitral tribunal” would be activated when companies claim economic compensation for decisions that affect patents, generics or price controls that reduce business and claiming millions in compensation on the basis of “loss of profits” (money that they stop receiving on several very lucrative deals).