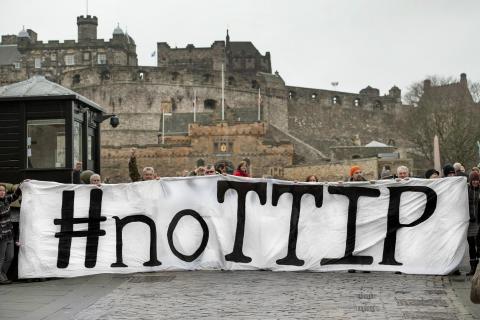 The TTIP of the spear

IT IS becoming hard to remember a time when Europe was not in crisis. The European Union doused the Greek fire (though the embers still glow) only to be confronted with flows of refugees it could not manage. Relations with Russia, already gravely wounded by the invasion of Ukraine, are now further complicated by the Kremlin’s deployment in Syria. And Britain’s long-dormant “renegotiation” of the terms of its EU membership is about to blow up into a high-stakes affair that could end in Brexit (see our special report).

Next to this house of horrors, striking a trade deal should have been easy. So Europe’s leaders thought when they gave the European Commission a mandate to negotiate the Transatlantic Trade and Investment Partnership (TTIP) with America in 2013. The EU could do with a jolt of growth, and America is a natural partner; there should have been no rows about cheap goods undermining European workers. Yet TTIP has run into a wall of opposition. Polls show majorities oppose it in several countries. Local authorities across Europe have (meaninglessly) declared themselves “TTIP-free zones”. On October 10th at least 150,000 Germans marched in Berlin to register their disapproval.

What explains the fears? Friends and foes agree on one point: TTIP is not your grandparents’ trade deal. As with the Trans-Pacific Partnership (TPP), a recently concluded agreement between America and 11 other countries, eliminating tariffs is the smaller part of TTIP because there are few left to cut. Modelling is hard, but the European Commission reckons slashing “non-tariff barriers” would account for four-fifths of the 0.5% boost to European GDP that an “ambitious” deal could bring by 2027. These hurdles include equivalent but incompatible rules on matters like food testing and car safety, which make it expensive for American and European manufacturers to operate in each others’ markets.

That sounds deathly dull, but to TTIP’s opponents such “regulatory co-operation” is a trap that will force chlorine-soaked chickens down European throats and fracking pumps onto their land. Dealing with such complaints, sighs a Eurocrat, “is like fighting Russian propaganda”. But discard the myths and you are left with an awkward truth: “new-generation” deals like TTIP that focus on rules rather than tariffs are vulnerable to citizens’ suspicions of a concealed takeover by corporations bent on destroying jobs and welfare rights. Such worries have already forced the EU’s trade commissioner, Cecilia Malmstrom, into a partial retreat on a measure of TTIP that lets firms sue governments. Moreover, the deal’s fuzzy nature makes credible economic forecasts hard. Opposition has been fiercest in Germany and Austria, two countries with strong social systems and low rates of unemployment: lots to lose and not so much to gain, critics would say.

So now TTIP’s supporters are emphasising two related strategic arguments. First, TTIP will cement the alliance between the world’s great democratic powers at an unstable time; some speak of an “economic NATO”. Second, establishing common, or mutually recognised, standards in the world’s two largest consumer markets will oblige the rest of the world to follow suit, even on such matters as labour and human rights. And if Europe and America account for a declining share of global economic output, all the more reason to establish the rules of the road today. A new EU trade strategy launched by Ms Malmstrom this week seeks to put such ideas into practice in new deals with countries like Australia and New Zealand, even if the details remain murky.

There is something to all this. TTIP cheerleaders in tricky countries like Austria say hostile audiences can be turned when the deal is presented as an alliance between democracies. Russia has been doing its best to undermine the TTIP talks, which suggests the negotiators are on to something. Angela Merkel, Germany’s chancellor, is said to find the strategic case for TTIP more persuasive than the economic one, although as yet she has done little to try to win over her sceptical electorate.

Yet there are plenty of dangers, too. If bilateral or regional deals draw on values rather than economics, there is a risk of alienating those left outside. Such agreements may end up poisoning the multilateral system, which is already sickly. Talk of an economic NATO may not appeal to those who do not much like the military original: such people will recoil rather than rejoice at talk of tightening the transatlantic embrace. Lastly, there is a separate risk in Britain, which will hold an in/out referendum by the end of 2017. Its Eurosceptics say the country would be better off striking its own trade deals rather than relying on the deadbeats of Brussels. If TTIP goes nowhere, some Britons will think they have a point.

The TTIP negotiations have slowed to a crawl; even the discussions on tariff elimination, which was supposed to be the easy bit, have dragged. (The two sides will discuss a new offer at talks in Miami next week.) Heads were knocked together at a recent meeting in Washington, and negotiators are hopeful that some sort of deal can be struck before the end of Mr Obama’s term in January 2017. If they fail, the next inhabitant of the White House may discover other priorities, and the deal could fall hostage to elections in France and Germany.

That would undermine a European approach that awaits its first test. Unlike foreign policy, trade happens to be an area in which the EU wields real authority. But the EU’s experts deal with phytosanitary standards and documentation requirements, not grand strategy. Trade agreements can be deadly weapons, as the EU learned in 2013, when a deal its technocrats offered Ukraine was interpreted by Vladimir Putin as a geopolitical offensive, triggering revolution and war. That the EU has started to think more seriously about trade as a tool of foreign policy suggests it has learned this lesson well. But it should be mindful of the risks.