A year ago, president Roh Moo-hyun, promoting a free trade agreement (FTA) with the United States, said that opening the services market - which would include the legal field - would "mean more jobs" and "be an opportunity for our young people to make it onto the world stage." Since then, he hasn’t said anything about what would make things better. The only reasons his government has given for why the opening would be a good thing is that it would promote growth, create jobs, increase the country’s international competitiveness, lead to greater foreign investment, and increase the quality of services. And the government’s "invisible hand" is nowhere to be seen, despite the fact that one needs to be in place in order to keep an opening market under control and promote the public good in that process.

An example that proves this point: one study suggests that 15 percent of Korean laws would conflict with an FTA with the U.S. The Korean Constitution stipulates that even without the passage of additional legislation, any international treaty ratified by the National Assembly is as valid as domestic law. What that means is that the moment a free trade pact is signed with the U.S., 169 Korean laws would be incapacitated. Each is a law that has been enacted amid conflicting interests, after considerable discussion, agonizing, and compromise: a process surely causing political conflict. Now, a few negotiators trying to hide their choices from the public are able to turn this very difficult, painstaking process of legislation into nothing. The values of the public interest, formulated through years of hard work in the world of Korean politics, would be blown away instantaneously.

The procedures for resolving disputes between investors and states would be more than enough to relegate irrelevant issues such as the environment, public health, and the public’s welfare as must be established for the future, all because of the attendant concept of "indirect expropriation."

What would occur is a bizarre situation where our own lives and our own health would be determined by the laws of others in accordance with international mediation procedures. Problems of public welfare that must be dealt with through respect for the will of the people and in a context that is as public as can be would instead be judged by international customary law or American law.

An example would be pressure on state corporations. These bodies that provide universal access to water, communications, medicine, education, and other essential services would be called upon to follow market principles. They privatized water in the Philippines and numerous poor people ended up having to drink contaminated water; we would be forced to have the same experience. This is why an FTA with the U.S. would not stop at being just another trade agreement. It would mean the shock of the end of public welfare in our society. It would mean we would be prevented from dealing with our problems in accordance with the values and ideas that are our own. Everything would be subjugated to U.S. values, packaged as the "global standard." It would not like other FTAs, either, not like the one we have with Chile. Our society would be overwhelmed with values that are different, and powerful.

This is what is so surprising about the president’s statement about opening up the market for legal services in order to make room for this FTA. The legal interests pursued by President Roh’s "young people" when they take the kind of jobs that would increase would not be in our interest. Just like what happened with Germany when they hastily opened their market, huge U.S. law firms would take over the Korean market and Korean lawyers would be unable to move an inch beyond what is ordered them by their U.S. employers. The Korean values that are the standard for legal judgment here would then be replaced with U.S. or "global" values. Is this what the president meant when he said this would make us an "advanced nation" in the future? 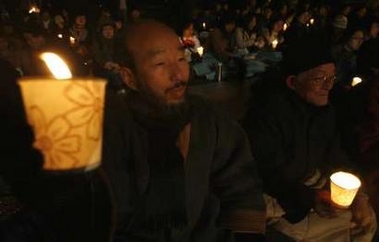 Protesters participate in a candlelight vigil to oppose free trade agreement (FTA) talks between South Korea and the United States, near a venue for the FTA talks in Seoul January 18, 2007. REUTERS/Jo Yong-Hak

The FTA negotiations are nearing an end and, as a result, more citizens are expressing their opposition to it. Even now, however, our government has yet to produce an effective proposal for how it would secure the public’s interest and welfare. Instead, it has actually become more secretive and is trying to quiet the opposition of civil society. Has it given up being a government at all?