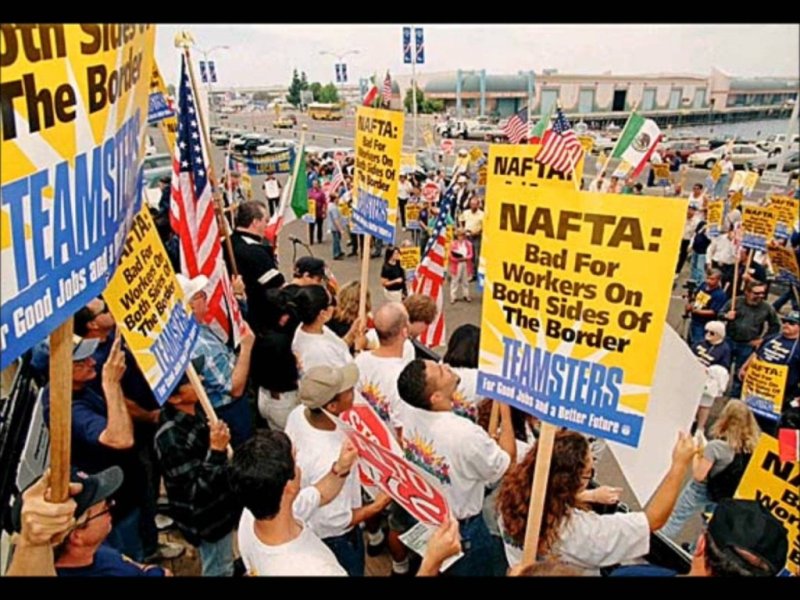 This is a really dumb way to fix poverty

This is the basic economic function of core aspects of the American social safety net — the minimum wage, food stamps, Medicaid, the Earned Income Tax Credit and, to a lesser extent, Social Security and Medicare.

But there is an alternative vision that says the moral logic underpinning these programs is wrong. Zach Beauchamp illustrates it for Vox, but it is endemic to the worldview of the Beltway professional class. This doctrine describes itself as “free trade” economics, and its moral logic goes like this: Poverty cannot be solved by taking money from the rich and giving it to the poor. Instead, poverty should be addressed by taking money from the slightly-less-poor and giving it to the somewhat-more-poor.

This dispute over what to do about poverty is important, because Bernie Sanders (I-Vt.) has been challenging the free trade doctrine on the 2016 presidential campaign trail, and unlike GOP front-runner Donald Trump, Sanders seems to actually care about the plight of the global poor. Free trade advocates therefore feel compelled to explain to Sanders that he is being irrational.

“Free trade is one of the best tools we have for fighting extreme poverty,” Beauchamp writes. “If Sanders wins, and is serious about implementing his trade agenda ... he will impoverish millions of already-poor people.”

Free trade is an economic policy that, as Beauchamp notes, damages the American working class to allow some people in the developing world to have slightly higher incomes. By gutting manufacturing jobs in the United States and shifting them to low-wage countries where workers are willing to accept far lower pay, free trade has raised wages for many people abroad. Opponents of this policy are therefore enemies of the global poor, according to free trade evangelists.

This is morality laundering, in which the otherwise obvious tenets of a belief system are channeled through econo-speak and the complexities of international law to hide their actual meaning.

The primary beneficiaries of declining labor costs are, of course, not workers. They are corporate shareholders and executives. These people are also known as “rich people.” Since the adoption of the World Trade Organization system and the implementation of the North American Free Trade Agreement in the 1990s, the wealth controlled by the richest Americans has increased dramatically while the real wages of everyone else in the domestic economy have declined. The upshot of this system, then, has been to take money from the American middle class, give some of it to the global poor and give tons of it to the global elite.

Clearing away the rhetorical obfuscation deployed by its advocates, we can restate the two basic moral principles of free trade this way. First: economically insecure people in the United States have it too good. They do not deserve the higher standard of living that could be achieved by using trade policy to enhance their well-being. Second: the financial elites who reap the overwhelming share of benefits from free trade deserve to be very rich. It would be wrong to arrange markets in such a way that these people ended up with less money.

House Speaker Paul Ryan (R-Wis.) has spent years decrying America’s “makers and takers” problem. The social safety net was becoming a “hammock” that permitted lazy people to waste away, fueling poverty, he said. The poor, in other words, had it too easy.

Even Ryan has since apologized for this rhetoric. But the core moral idea behind free trade is similar, if we substitute trade policy for welfare as the mechanism used to elevate the incomes of the American workers. Free trade is Paul Ryan 2012 gone international. No wonder he’s a strong free trade advocate.

Proponents of free trade make a host of empirical claims about its effects, including that it boosts economic growth in poor countries and lowers prices for consumers in rich countries. Beauchamp doesn’t spend much time with the latter point, since even its advocates acknowledge that getting to shop at Walmart is pretty shoddy compensation for losing a good job — and anyway, he’s focused on the super-poor, who live in other countries. Beauchamp does spend a lot of time arguing that free trade has boosted economic growth in poor countries. And it has! But there is no reason to believe that the only way poor countries could have achieved that growth was to conduct trade policy exactly the way we have for the past 30 years. If this economic growth was so valuable to poor countries, maybe American negotiators could have required them to allow their workers to form unions.

The bald fact is that free trade often does not result in meaningful wage increases for workers in low-wage countries (see: NAFTA), which makes it pretty hard to see why it’s such an awesome poverty-fighting tool. Shifting the global supply of labor to poor countries over the past few decades has also resulted in a corresponding surge of financial capital to the United States. That wave of money didn’t go toward helping the poor and middle class in the U.S. — it went into asset bubbles that caused international economic calamities. Don’t take my word for it; ask Ben Bernanke.

But even if none of that empirical landscape were real, the moral code implied by free trade true believers is simply ridiculous. Anyone serious about fixing poverty should be talking about taking money from rich people, not the poor.